A 3-1 loser to Toronto Monday night, the Mariners send Felix Hernandez to the mound Tuesday to try to get him a win, which they failed to do his past 2 outings despite his brilliant work.. 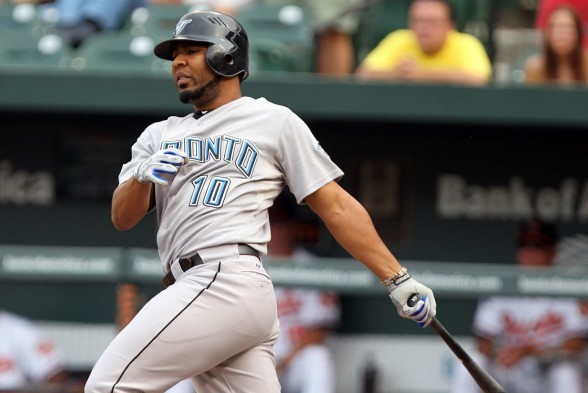 Take his last two outings, the most recent examples of Hernandez pitching splendidly and emerging with nada. On July 26 vs. Minnesota, he allowed one run on five hits with 11 strikeouts and no walks in a 9.0-inning effort. He didn’t factor in the decision in Seattle’s 3-2 loss.

In his last start, Aug. 1 at Fenway Park, he allowed one run on six hits with eight strikeouts and two walks. Hernandez left with a 7-1 lead and had to watch in horror/consternation as the Seattle bullpen gave the game away.

So in his last two, Hernandez has ceded two runs in 16.0 innings, fanned 19 with two walks and has nothing but “NDs” to show for it.

Hernandez gets a shot at win No. 12 Tuesday when the Mariners and Blue Jays play the second of three at Safeco Field. He has to hope for a better fate than befell Hisashi Iwakuma Monday night. Iwakuma yielded two runs on four hits over seven innings but came away with a 3-1 loss, barely outpitched by former Mariner R.A. Dickey.

Hernandez’s start Tuesday, on paper, is a gimme putt — unless Toronto starter Josh Johnson suddenly morphs into vintage Pedro Martinez. Johnson is mired in the worst slump of his career, winless since June 23 against the Orioles. He has allowed 21 runs in the first two innings of his past six outings and has a 9.00 ERA over that span.

The 27-year-old Hernandez, in his ninth major league season, all with Seattle, will make his 24th start and second against Toronto. Hernandez is 6-0 with a 2.11 ERA over his last 12 starts, but wound up with a no-decision Thursday when Seattle blew a 7-1 lead after he’d thrown seven innings of one-run ball. He threw eight scoreless innings at Toronto in a 4-0 win in May.

The 29-year-old Johnson, a Minneapolis native in his ninth major league season and first with Toronto, will make his 16th start and first against the Mariners. A former All-Star, Johnson is in the midst of a horrendous season. He has lost six consecutive starts and been shelled in more than half of them. In his last three outings, he has allowed 18 earned runs on 24 hits.