In a move that stunned the soccer world, the Sounders introduced America’s premier player, Clint Dempsey, before Saturday’s 3-0 triumph over Dallas. 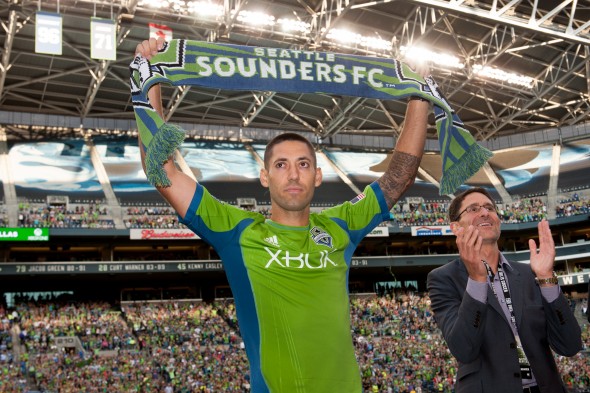 Moments like this are rare. In Seattle, a city where sports success is as common as an arid winter, they’re almost unheard of. A sold-out CenturyLink Field Saturday welcomed Clint Dempsey by bellowing his nickname at a decibel level reserved for Sundays in December, when the NFL is the show, and the MLS an afterthought.

Dempsey stood atop a podium near midfield. A sliver of rave green peaked out from under the collar of his trademark hoodie. A montage featuring his own rap video blasted in the background. The pre-game presentation by Sounders majority owner Joe Roth began as a mock interview, asking the man he signed earlier Saturday to four-year, $32 million contract what he was doing in town.

Dempsey peeled off his hoodie to reveal his Sounders jersey, to an approving roar.

The best American soccer player was back in MLS, a member of its most popular team.

“I think we’ll accomplish some great things here,” Dempsey said, fighting back emotion. So it began.

The evidence backs up the prediction. Dempsey is a back-to-back recipient of the U.S. Soccer Male Athlete of the Year and has won the prize three times. His 35 career goals in international competition for USMNT is second on the all-time list. At 30, he is moving to the MLS while playing the best soccer of his life, rather than taking the route of former EPL stars like David Beckham, who transferred to the LA Galaxy only after his production diminished.

“They moved mountains to get me here,” Dempsey said in an interview at halftime of the game’s telecast.

Dempsey, from Nacogdoches, TX., broke down barriers in the EPL, setting a record for goals scored (57) by an American player during stints with Fulham (2007-12) and Tottenham Hotspur (2012-13). His MLS roots trace to 2004, when he won MLS Rookie of the Year with the New England Revolution. He was an MLS Best XI selection in 2005 and 2006.

Those factors contributed to his MLS return. He couldn’t have sounded happier after watching the first half from the sidelines.

“The atmosphere at this game is incredible,” he said.

“This is a historic day for Sounders FC and our fans,” said Roth in a press release. “Clint is a world-class soccer player who can take this club to a higher level. We have been consistent in our message to our fans that we will spare no expense to win trophies.”

Perhaps the thought of a championship contributed to the behavior of a group of Sounders fans, who last night traveled to Sea-Tac Airport to in hopes of welcoming him.

“It makes it feel like it’s a real thing,” said midfielder Brad Evans. “It makes you feel like it’s proper. It’s a real sport, and that’s the passion that you need. It probably wasn’t there even five or six years ago.”

Added part-owner and GM Adrian Hanauer, “In doing something of this magnitude, we had to make sure we had the right player. Clint Dempsey fits that mold.”

The magnitude extends beyond the pitch and into the franchise’s deep pocketbook. By signing Dempsey, the Sounders made the six-foot-one, 170-pounder the highest paid player in the MLS, more than doubling the $3.75 million that Red Bulls forward Thierry Henry collected in 2012.

The Sounders had no need for Dempsey to play, riding the euphoria to a 2-0 lead in the first 22 minutes over a foe it trailed by four points in the Western Conference standings. Forward Obafemi Martins scored a spectacular goal in the eighth minute, taking a free kick from midfielder Mauro Rosales and, with his back turned, blindly heading the ball past Dallas goalkeeper Raul Fernandez.

In the 22nd minute, forward Eddie Johnson chipped in a goal after receiving a long pass from Evans that flew over the top of the defense.

Johnson credited Dempsey, his USMNT teammate, for his performance.

“I’m playing out here with really big emotions,” he said. “It was hard for me not to tell anybody what was coming. But, now the whole world knows. What a great contribution added to our team, and added to this league. You know every little kid in America wants to be like Clint (Dempsey). We’re happy to have him here in Seattle.”

After nearly 70 minutes of scorelessness, Evans supplied the icing in the 90th with a penalty kick after a foul on Lamar Neagle.

The win set a franchise record by extending to nine games (6-0-3) Seattle’s home unbeaten streak, and in continued its dominance against Dallas in the past six matches (5-0-1).

“The main thing tonight is us winning,” Schmid said. “That’s the story.”

He will have to excuse his fans, and the rest of the MLS, for disagreeing. 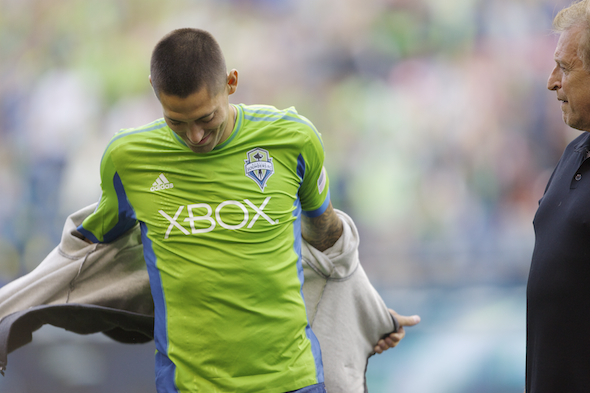 After owner Joe Roth, right, asked him what he was doing in town, Clint Dempsey peeled to reveal his new colors. / Drew Sellers, Sportspress Northwest