Losers of two bad outings to Toronto, the Mariners Wednesday face J.A. Happ in his first start since a May 7 skull fracture from a batted ball. As if the Blue Jays needed inspiration. 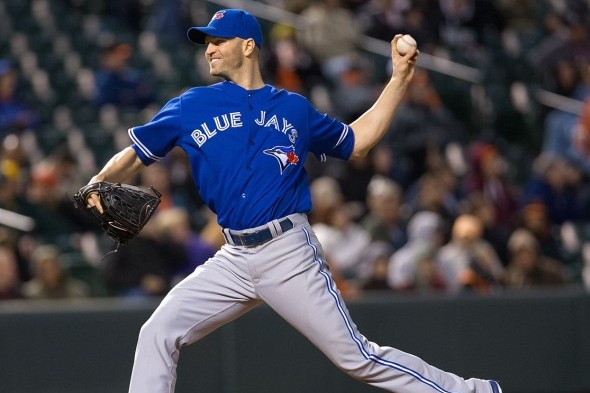 In early May, J.A. Happ of the Toronto Blue Jays suffered a fractured skull when hit by a line drive. Wednesday, he makes his first start since that day. / Wiki Commons

On May 7, the Tampa Bay Rays put up a second-inning four-spot against Toronto starter J.A. Happ when Desmond Jennings rocketed a line drive toward the box. This is how The Associated Press described the play: “The line drive that hit A.J. Happ in the head hit him so hard the ‘thwack’ could be heard up in the press box. The ball went all the way into the bullpen in foul territory halfway down the right-field line. Happ dropped face down at the front of the mound.”

“It was devastating,” said Happ’s teammate, R.A. Dickey. “I could barely watch it. You just don’t know what to think. It paralyzes you a little bit. And when it sounds like two bats, when you hear the sound off the bat and it sounds like it hits another bat, it’s scary, really scary. I just started praying on the spot.”

Last September, Oakland right-hander Brandon McCarthy was hit in the head by a line drive that fractured his skull and caused an epidural hemorrhage and brain contusion. He underwent surgery for six hours and didn’t pitch the rest of the season. In June, McCarthy suffered a seizure related to his head injury and missed two months.

Wednesday afternoon, in the third of three between the Blue Jays and Mariners, Happ will make his first major league start since May 7 when the Jennings line drive fractured his skull, and the ensuing fall caused a sprain of his right knee. If any Seattle opponent is worthy of a round of applause, it is Happ.

The 35-year-old Harang, a San Diego native in his 12th major league season and first with Seattle, will make his 19th start and first against the Blue Jays. Harang battled some tightness in his upper back last Friday that affected his command as he gave up seven hits and seven runs in five innings in an 11-8 loss at Baltimore. He’s been better at Safeco Field this year, where he’s 4-5 with a 4.34 ERA.

The 30-year-old Happ, a Peru, IL., native in his seventh major league season and second with Toronto, will make his eighth start and first against the Mariners. The Blue Jays activated Happ from the 60-day disabled list to make the start. The left-hander has been out since May 7 when he was struck on the head by a line drive. Prior to his injury, Happ had three no-decisions in four starts. His last win: April 12 at Kansas City.