Compared by WSU teammates to fictional Ivan Drago and by coach Mike Leach to a hungry “grizzly,” Andrei Lintz has the physical tools to play in the NFL. 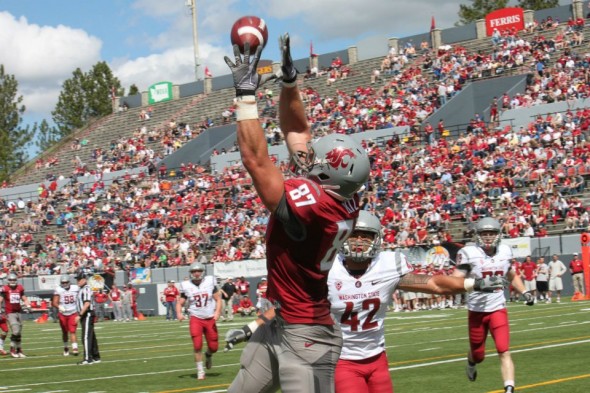 He capped a marathon day of workouts in Lynden Wednesday with a best-of-five racquetball series at the local YMCA against former Washington State teammate Blair Bomber. The pair had already been to Bomber’s high school, running routes and doing sprints to stay in shape in case the NFL called.

Lintz, who grew up near Bellingham and graduated from WSU in May, knew the Denver Broncos were looking at him at tight end. But a college senior season in which he caught only two passes kept him from raising his hopes.

Racquetball was supposed to interrupt the monotony of training by providing extra cardio and a little fun. Instead, their latest match turned into a thrashing.

“I beat him three straight in a best-of-five,” Bomber, a wide receiver at Eastern Washington, said. “He was pissed.”

Lintz’s mood would improve. Earlier in the day, his agent told him the Seahawks, too, could be interested. There was a voicemail from him when Lintz returned to the parking lot and hopped in his father’s blue minivan.

“I called (my agent) back and he said, ‘Hey, let me call you back in about 20 minutes,'” Lintz said Friday at the VMAC in Renton, donning pads for the first time since the 2012 Apple Cup.

A Seahawks fan growing up, Lintz won’t forget what his agent told him next.

“I think they want you.”

He wasn’t positive, at least not yet. So Lintz’s mind remained occupied as he and Bomber drove across the two-lane highways that cut between the berry fields that drape north Whatcom County. They waited for another call.

Lintz’s phone rang. It was his agent. The Seahawks wanted him in Renton that night. Lintz barely had time to drop off Bomber, shower and pack.

“It was crazy. I didn’t know what to think,” Lintz said.

Nor did the Seahawks, though they knew they were interested in the six-foot-five, 260-pounder who played inside receiver his senior year at WSU, but didn’t produce after appearing capable of impact during spring practice.

Lintz arrived Thursday morning at the VMAC and passed his physical, then worked out for Seahawks management. Hurting for depth at tight end after Anthony McCoy was lost for the season with an Achilles injury and Zach Miller sat out the early part of training camp (foot), Seattle’s decision to sign Lintz to a non-guaranteed, free-agent deal was made easier after seeing him perform in person.

“He came out and he caught the ball really well, and he ran well,” coach Pete Carroll said.
“Right now, it’s a great opportunity for a guy to come in and get some snaps and show us what he can do. It’s nice to have a local kid come in and take a shot at it.” 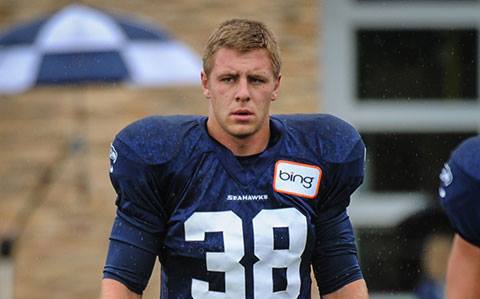 The Seahawks have given TE Andrei Lintz an opportunity to extend his football career a year after a disappointing senior season at Washington State / Seahawks.com

His workout wouldn’t surprise anybody who saw the Meridian High School graduate practice during his junior year of college. So imposing was Lintz, a Russian immigrant who moved with his parents when he was six from St. Petersburg to the U.S., that teammates compared him to Ivan Drago, the fictional boxer played by Dolph Lundgren in “Rocky IV.”

“They have the same jawline,” Bomber said of his Russian-speaking friend.

Washington State coach Mike Leach was enamored with Lintz’s size, speed and soft hands, comparing him to a grizzly bear that needed to get his paws — or hands — on garbage, or in Lintz’s case, the football. Midway through spring camp, Leach threatened to bring out a dumpster so Lintz could practice violently using his hands to rummage through the trash. Preseason magazines tabbed him as a possible difference-maker in Leach’s first season on the Palouse.

“I’m not here to make excuses,” Lintz said, reflecting on the five years he spent in Pullman. “What’s in the past is in the past. Coach Leach is a great coach. It was definitely a disappointing season, but it’s just something you got to move on from.”

Move on he has, free now of the knee pain caused by friction in the IT band, a durable string of muscle tissue that runs down his leg. The problem was never mentioned because Leach refuses to discuss injuries. The problem worsened when Lintz didn’t rest it during his final fall camp, running an average of 4,000 yards every practice while trying to learn how to play a new position in the Air Raid Offense.

“His knee diminished to the point where he wasn’t as explosive as he was,” Bomber, who transferred from WSU in December, said. “He wasn’t coming off the ball with as much pace.”

“He never got a chance to get healthy that whole year,” Bomber added. “He just wasn’t the same guy.”

However, Lintz’s demeanor stayed constant. A star at Meridian in basketball, football and track, he dwarfed the competition at the 1A classification while his mom, Galina, a para-educator at the high school, watched. Lintz suffered a broken ankle during a practice leading up to the East/West Football All-Star Game following his senior season and had to redshirt as a freshman at WSU for coach Paul Wulff. That moment preceded a college career that never really got started, despite boasting an imposing physical frame capable of overwhelming Pac-12 opponents.

“The dude is a monster,” Bomber said. “It’s not just genetics. He worked his ass off to get how he is. That’s what I admire about him a lot. He was a no-days-off guy.”

And now he’s preaching the benefits of taking it one day at a time, while he tries to a climb a Seahawks depth chart that includes five other tight ends. In a best-case scenario, he would carve out a spot on Seattle’s practice squad and earn a paycheck to play a game he still loves.

The formula for a Hollywood script featuring an underdog overcoming all odds is there — right down to the small-town kid receiving an opportunity to make the most of a second chance.

It’s little wonder that Lintz put his own spin on a “Hoosiers” reference when asked how he calmed his nerves before his first NFL workout, offering the same perspective that coach Norman Dale gave his team the night before their championship game.

“It dawned on me,” Lintz said. “It’s a 100-yard field, 53 yards wide and the goal posts are 10 feet high. A football field is a football field. It’s been something I’ve been doing my whole life.”

In that case, playing a few more months couldn’t hurt.