Ken Griffey Jr., who hit 630 home runs in his 22-year major league career, including 417 in a Seattle uniform, entered the Baseball Hall of Fame Wednesday. 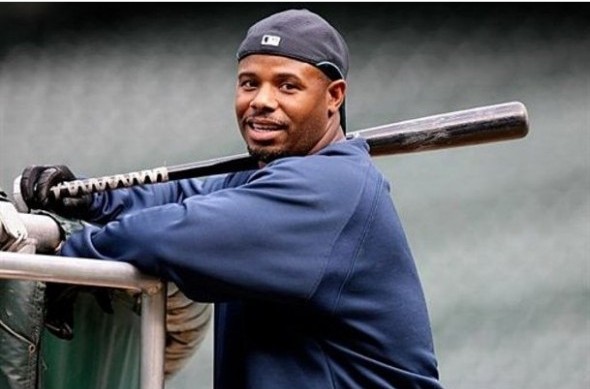 The Mariners selected Ken Griffey Jr. first overall in the 1987 amateur draft and he went on to become the greatest player in franchise history. Griffey won election to the Baseball Hall of Fame Wednesday. / David Eskenazi Collection

Collecting a near-record x percent of the vote, Ken Griffey Jr. (1989-10) Wednesday swept into the Baseball Hall of Fame, becoming the second long-time Mariner in two years to gain induction in his first year of eligibility. Last year, Randy Johnson, whose Seattle career (1989-98) coincided with Griffey’s first stint with the franchise, was elected with 97.3 percent of the vote.

Griffey joined the Mariners organization in 1987 when the club selected him No. 1 overall in that year’s June amateur draft. He rose swiftly through the club’s minor league system and reached the major leagues as a 19-year-old in 1989, when he began the first of two tenures with the Mariners, and by far the greatest.

The first stint ended when Griffey departed for Cincinnati in a multi-player trade in 2000. He returned to Seattle in 2009 for his last full season with the club. Seventeen years old when he began his professional career, Griffey retired early in 2010 at 40. Griffey’s career highlights:

A 10-time All-Star, a 10-time Gold Glove winner and the 1997 unanimous American League  Most Valuable Player with the Mariners, Griffey is the most significant player in Seattle baseball history. During his first 10 seasons with the Mariners, Griffey became the club’s first major gate attraction, its first superstar, its first annual All-Star starter, its most forceful personality and the main reason the franchise escaped its dubious history and become a Northwest summer-entertainment fixture.

In late August 1995, Griffey hit the home run that launched the Mariners on their remarkable comeback, scored the run that beat the Yankees in the 1995 ALDS and, in 1999, was named one of the 100 greatest players of the 20th century and the Player of the Decade for the 1990s.

Following eight, injury-plagued seasons with the Cincinnati Reds and a brief run with the Chicago White Sox, a 39-year-old Griffey, after a 10-year absence from Seattle, returned to the Mariners for the 2009 season. 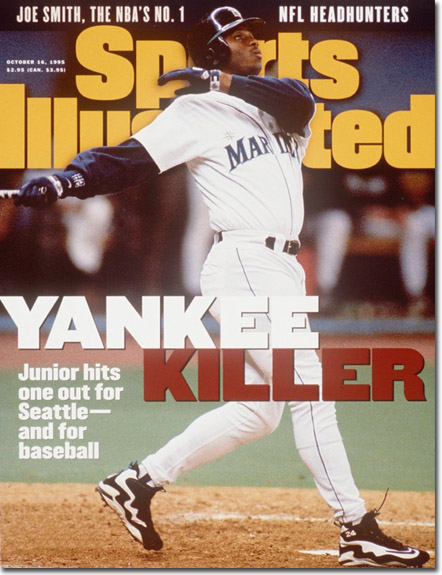 Griffey was instrumental in the Mariners defeating the Yankees in the 1995 ALDS.

Although only a shadow of his former self – he hit .214 in 117 appearances while dividing time at designated hitter with Mike Sweeney – Griffey managed 19 home runs and was cheered constantly by an appreciative Mariner faithful for his career achievements.

“The Great Book of Seattle Sports Lists” selected Griffey the No. 1 athlete in Washington state sports history in 2009. But by 2010, Griffey had nothing left in his tank. Batting .184 with no home runs and seven RBIs, Griffey abruptly left the team June 2, 2010. He never played again.

Named to 10 consecutive American League All-Star teams during his first tenure with the Mariners (1990-99). 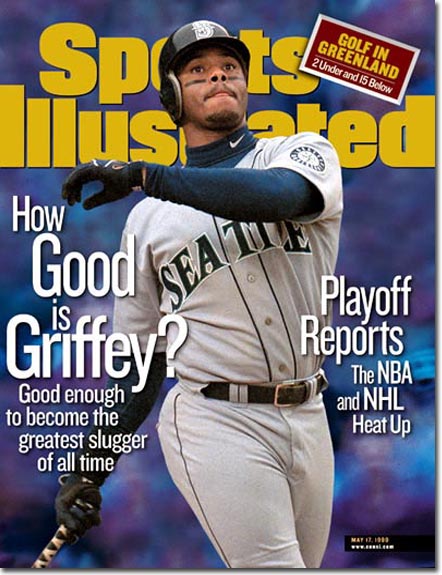 April 3, 1989 / First At-Bat: Facing Oakland ace Dave Stewart in the Coliseum, Griffey swung at the second pitch he saw and drove the ball off the wall in left-center for a double. Said manager Jim Lefebvre: “Griffey is going to make any manager look very good.”

April 10, 1989 / First Homer: Smacked a liner over the fence in left off Eric King in Seattle’s 6–5 win over the White Sox in the Kingdome. After completing his first home run trot, Griffey said, “I really didn’t think it was going out because I didn’t see it after I hit it.”

April 26, 1990 / Wall Climber: Robbed Jessse Barfield of what would have been Barfield’s 200th career home run with an over-the-wall catch in the fourth inning at Yankee Stadium that drew a standing ovation.

Aug. 31, 1990 / Father & Son: Ken Griffey Sr. and Griffey Jr. became the first father-son tandem in major league history to play as teammates. In the bottom of the first inning, they drilled back-to-back singles off Storm Davis in what became a 5-2 win over Kansas City. Said Griffey Jr.: “I was so happy, I wanted to cry.”

July 14, 1992 / All-Star Show: Griffey stroked a single and a double and homered off Greg Maddux in the American League’s 13-6 win over the National League, becoming the first Mariners player named MVP of the All-Star Game. 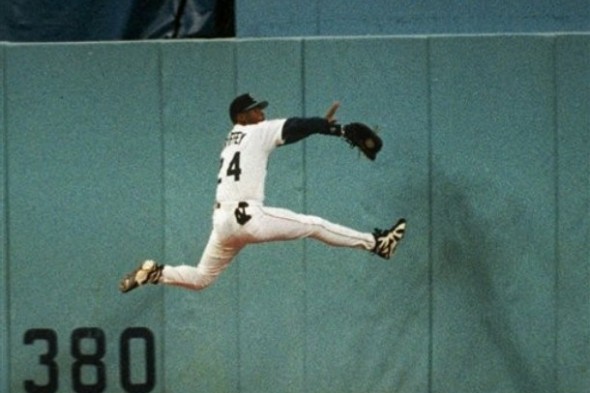 Griffey, aka “Spiderman” snags a shot off the center field wall in the Kingdome in 1995. / Seattle Mariners

July 13, 1993 / Camden Clout: Griffey became the first player to hit the B&O Warehouse beyond Camden Yards, reaching the facade during the All-Star Home Run Derby with a shot estimated at 460 feet.

July 28, 1993 / Eight In A Row: Griffey hit a home run in his eighth consecutive consecutive game to tie the major league record first set by Dale Long (1956) and later matched by Don Mattingly (1987). “As far as I’m concerned, he’s the best thing that’s happened to the game in a long time,” said C Dave Valle.

April 24, 1994 / Long Shot: Griffey belted a game-winning, 438-foot home run that landed in front of the B&O Warehouse on Eutaw Street, the longest homer by a left hander in Camden Yards history. Griffey’s blast came at the expense of Brad Pennington, who had just taken over for Baltimore starter Jamie Moyer.

May 26, 1995 / Spiderman Act: Broke two bones in his left wrist making a Spiderman-like catch against the Kingdome’s right-field wall, an injury that forced him out for 73 games. “It didn’t hurt at all at first,’’ said Griffey. “Then I looked at it and knew it was broken.”

Aug. 24, 1995 / Yankee Killer: On the verge of losing a one-run decision to the Yankees and damaging their wild-card hopes, the Mariners pulled out a 9-7 win when Griffey, just off the DL, stroked a two-run homer in the bottom of the ninth off John Wetteland. 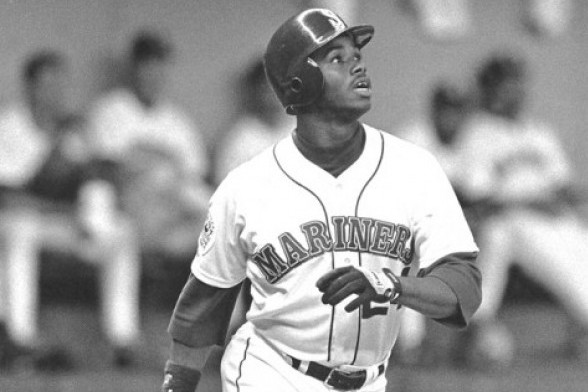 Ken Griffey Jr. became a hit with fans from the moment he showed up at the Kingdome. / DR Collection

Sept. 28, 1995 / Salami Time: Snapped an eighth-inning tie against Texas with a grand slam off Roger Pavlik that gave the Mariners a 6-2 win that kept Seattle two games ahead of the Angels in the AL West race.

Oct. 8, 1995 / Safe At Home: Steamed around the bases following Edgar Martinez’s double in the bottom of the 11th to give the Mariners a dramatic 6-5 win, and a 3-games-to-2 victory over the Yankees in the ALDS.

Jan. 31, 1996 / Highest Paid: Became baseball’s highest-paid player by signing a four-year, $34 million contract. Griffey agreed to defer $1.2 million per year so the Mariners could stay under their $35 million payroll.

April 12, 1996 / Hard Rocker: Not only took Toronto’s Giovanni Carrara deep, but took him ABOVE the SkyDome’s Hard Rock Cafe. The 451-foot shot marked just the fourth ball hit into the SkyDome’s fourth deck. Ken Griffey Jr. is out of the box, but not the shadows quite yet / KPA Sports, Wikimedia Commons

May 24, 1996 / Yankee Killer: Hit three homers, scored five times and drove in six as the Mariners defeated New York 10-4. “You sign a big contract,’’ said Griffey, “and if you don’t deliver from Day One, they jump all over you.” June 27, 1999 / Done At Dome: Hit the last home run in Kingdome history, a three-run shot off Aaron Sele, in Seattle’s 5-2 victory over the Rangers. “I’ve been here 11 years,’’ Griffey said. “It’s like if you move out of your home, you’re going to miss that. I know all the ins and outs of this ballpark.”

Sept. 22, 1999 / 398th Homer: Smacked a two-run home run off Jay Witasick of Kansas City for the 398th home run of his Seattle career – and what turned out to be his final home run before his trade to the Cincinnati Reds.

Feb. 10, 2000 / The Trade: Traded to the Cincinnati Reds for RHP Brett Tomko, OF Mike Cameron, IF Antonio Perez, and RHP Jake Meyer. Ken Griffey Jr., who spent the bulk of his career with the Mariners, became the 12th recipient of baseball’s “Historic Achievement Award.” / Wiki Commons

April 10, 2000 / 400th Homer: Belted his 400th career home run, a solo shot off Roland Arroyo in the fourth inning, and added a sacrifice fly in a 7-5 Cincinnati loss to the Colorado Rockies at Coors Field.

June 20, 2004 / 500th Homer: Swatted his 500th career home run, a solo shot off Matt Morris in the sixth inning, and added a sacrifice fly in Cincinnati’s 6-0 victory over the St. Louis Cardinals at Busch Stadium.

June 24, 2007 / Back At Safeco: Made his first return to Seattle in eight years over a memorable weekend at Safeco Field during which he received numerous standing ovations, hit two homers off Miguel Batista in the final game of the series, and told a rapt Seattle audience that he wouldn’t mind finishing his career as a Mariner.

June 9, 2008 / 600th Homer: In a 9-4 Cincinnati victory over the Florida Marlins, joined Barry Bonds, Hank Aaron, Babe Ruth and Willie Mays in the 600-home run club with a two-run shot off Mark Hendrickson.

Feb. 18, 2009 / Second Stint: Agreed to a one-year contract with the Mariners worth $2 million, with incentives that could boost the total to $4.5 million.

April 6, 2009 / Back At It: Hit the first home run of his second stint with the Mariners, a solo shot off Francisco Liriano, in Seattle’s 6-1 season-opening victory over the Twins.

April 14, 2009 / Return Home: Playing his first home game as a Mariner since Sept. 26, 1999, went 1-for-3 with a walk and rocked the Safeco crowd of 45,958 when he was introduced. “When they called ‘Ken Griffey Jr.!’ I was still on the mound (in the bullpen), but I stopped to watch,” starter Carlos Silva said of the pregame scene. “It was amazing. I never saw anything like that, that crowd, that intensity.”

Oct. 4, 2009 / Safeco Tribute: In what some thought might be his final game at Safeco Field, received standing ovations before each of his four at-bats, and another ovation after his final at-bat, an eighth-inning single. Following the game, Griffey was carted around the field on the shoulders of four teammates as Safeco fans lavished him with cheers.