Big money, yes, but Clint Dempsey said his return was also about coming back to America, finding success in Seattle and doing something to underscore the credibility of MLS. 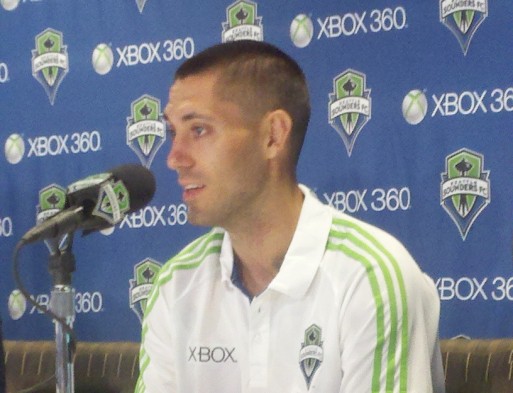 Clint Dempsey spent the past seven years in the English Premier League. He spoke Monday about what it would mean to win an MLS Cup. / Art Thiel, Sportspress Northwest

Clint Dempsey has been in Seattle less than a week, but the bullet points for his shocking return to the MLS, his decision to sign a four-year contract with the Sounders worth $6.86 million annually, have been discussed: The Sounders fan base that routinely draws 40,000 for home games. An ownership group committed to winning an MLS Cup. Dempsey’s chance to become the new face of a quickly evolving league. The elaboration for his decision to leave Tottenham Hotspur two years shy of completing his contract came Monday during Dempsey’s introductory press conference at CenturyLink Field.

“The league is changing. It is growing. Fans are coming out to the games. The soccer on the field is better,” he said.

Dempsey, 30, is in the prime of his career after spending the past seven years in the English Premier League. Perhaps more importantly, he’s reentering his comfort zone. What better place than Seattle for Dempsey, whose Twitter biography describes himself an avid fisherman first, and a soccer player last?

“It was cool to just be back in the states and do the things that I enjoyed as a kid growing up,” Dempsey said. “It’s the perfect place to be and do everything you want on and off the field.”

Even if the results that day weren’t so perfect — “I foul-hooked a minnow so it wasn’t impressive,” Dempsey said — the idea of life in the Pacific Northwest became more intriguing. Talking daily about the atmosphere at CenturyLink Field with USMNT teammate Eddie Johnson, a forward for the Sounders, helped him further narrow the places he might want to end up.

A desire to return to the country he grew up in played a role, too.

“I was already starting to get the itch to come back to the states,” said Dempsey, a native of Nacogdoches, TX. “I just missed being in America.”

Given his stature as the highest scoring American player in the EPL, the impression from that Seattle trip was critical to Dempsey foregoing his career overseas.

“Let’s be realistic,” said Sounders part-owner and GM Adrian Hanauer. “A player of Clint’s quality and pedigree has a say in where he ends up. That really was the process by which Clint came into the league and Seattle.”

Hanauer had been trying to acquire Dempsey for two years. Every few months he called the midfielder’s agent, Lyle Yorks, but the answer was always no. Until a few weeks ago.

As detailed more thoroughly by Sports Illustrated’s Grant Wahl, Hanauer and owner Joe Roth brokered the deal at Hanauer’s home Friday night over a sushi dinner. Weeks in the making, the contract, which included a $9 million transfer fee that the MLS reportedly paid for, was the final step in the Sounders acquiring the premier American player as he enters the prime of his career.

Not lost on Sounders management, nor coach Sigi Schmid, was the impact of Dempsey’s return to the MLS, a league long known as a place where talented players would leave in hopes of playing in Europe.

“The ability to bring a player back like Clint at this time of his career where he is still in his prime, and the financial commitment that the league made to make that happen, is a step forward,” Schmid said. “We were always considered a selling league where players are going to develop and move on to more lucrative pastures.”

Many believe Dempsey’s arrival — he will play Saturday when the Sounders travel to Toronto — improves Seattle’s chances of winning an MLS Cup as much as it improves the league’s image.

“By bringing a player like Clint back the statement is being made that we’re ready to step up and ready to move into that next level,” Schmid said.

Now the Sounders (9-7-4, 31 points), in their fifth year, aspire to the same goal. They’ve never reached the MLS Cup Finals and still are two points shy in the Western Conference of Vancouver and LA for the fifth and final playoff spot — though both clubs have played two more matches.

Dempsey, meanwhile, has spent less than a week in Seattle, but already understands exactly what’s expected.

“The goal here is to win an MLS Cup, and I’m going to do everything to make that happen.”