New signee Clint Dempsey won’t play the full 90, but he will see his first action as a Sounder Saturday. It just won’t be in this country. The Sounders meet the Reds in Toronto. 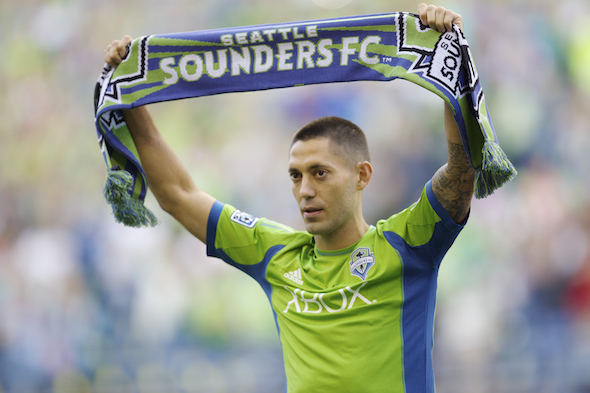 Clint Dempsey, signed by the Sounders to a $41 million contract, is expected to make his debut with Seattle in Toronto Saturday. / Drew Sellers, Sportspress Northwest

Head coach Sigi Schmid only hinted at how much Clint Dempsey will play Saturday in Toronto, but the Sounders have already started to realize a return on the $41 million investment they made in the 30-year-old Texan. Within hours of his signing earlier this week, the Sounders generated an additional 6,000 ticket sales for their next home match, Aug. 25 vs. Portland.

Before the Sounders can stage a welcome party, they have to play two road matches, starting in Toronto Saturday. Dempsey will bring quite a portfolio to the match:

While the Sounders are riding a nine-match (6-0-3) unbeaten run at CenturyLink Field (no losses since the home opener March 2), they have struggled away from home, going 3-6-1 with a -7 goal differential. The Sounders have lost the past three road games.

The Sounders have the most matches remaining (14) of any MLS team. Nine are against Western Conference foes, with all but one of those teams currently ahead of the Sounders in the standings.

“I think everybody realizes that we have the potential to get to the playoffs – that’s where we need to get to,” said Schmid. “We need to put ourselves in a good position and then make noise. Last year, the two fifth-place teams ended up playing for MLS Cup. We are, point-wise, not in the playoff picture. When you look at points per game, we’re pretty close.”

That’s part of what prompted the signing of Dempsey.

“The likelihood of him (Dempsey ) going 90 minutes Saturday is very small,” said Schmid. “Whether that’s starting and coming off or coming on as a sub, we’ll have to see.”

The match will be the lone meeting of the season between the sides, and Seattle enters it with four straight wins against the Reds. Seattle is expected to start Marcus Hahnemann in goal, as Michael Gspurning is still healing a sprained forearm.

Despite the addition of English Premier League veteran Robert Earnshaw, the club has sputtered offensively, ranking near the bottom of the league in goals (17th), assists (18th), shots (19th) and shots on goal (17th).

Earnshaw leads with six goals, despite not playing the last three games because of injury, while Bobby Convey and Jeremy Brockie have three assists apiece. Goalkeeper Joseph Bendik has played all 22 games and is just outside the top 10 with a 1.32 goals against average. The Reds have yet to win a game against a Western Conference side (0-5-2) this season.

The Sounders have not made an official announcement, but Sports Illustrated reported that Eddie Johnson and Evans will be called away from the Sounders Wednesday for the USA-Bosnia road friendly. Dempsey will apparently not join the U.S. team for the match.

With the friendly scheduled for Eastern Europe, it’s hard to tell how this will impact Seattle’s situation for the road match next Saturday Houston.

SERIES: Dates to April 4, 2009, when the Sounders won 2-0 at Toronto in a match that featured goals by Freddie Ljungberg and Steve Zakuani. Seattle has outscored Toronto by an aggregate of 12-5. In the most recent match, March 17, 2012, David Estrada recorded his first career hat trick as the Sounders won their 2012 season opener 3-1.

COMING UP: The Sounders are on the road for two of the next three matches. They visit the Houston Dynamo’s BBVA Compass Stadium for the first time Aug. 17 and will conclude the month with a visit to the Columbus Crew Aug. 31. Seattle hosts the Portland Timbers in the next home match Aug. 25.