Michael: Being with Seahawks ‘a blessing’

After a dismal senior year spent in the shadow of Heisman winner Johnny Manziel, Seahawks rookie RB Christine Michael sees an opening in Seattle, and is hitting it quickly. 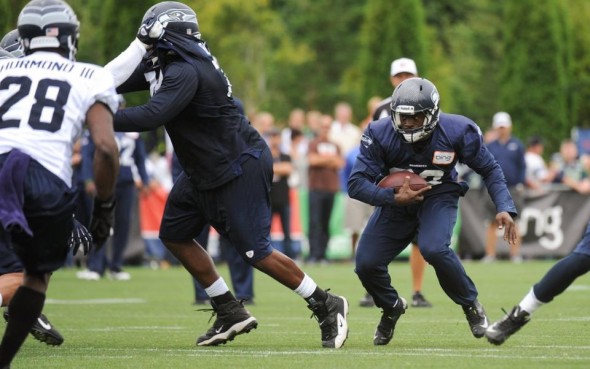 Excuse rookie Seahawks RB Christine Michael (pronounced chris-TIN) if he sounds a little holy when he talks about what it means to play in the NFL.

“I wouldn’t say it’s a second chance. I’d say it’s a blessing,” he said last week from the VMAC in Renton.

Less than a year ago, Michael, a senior, watched from the sidelines as the seconds wound down in Texas A&M’s 41-13 win over No. 11 Oklahoma in the Cotton Bowl. Before celebrating, Heisman Trophy winner Johnny Manziel, in a sympathetic gesture, wrapped his arm around him. The season was over. Michael’s time at A&M: Finished.

Ranked a five-star recruit by Rivals.com coming out of high school in Beaumont TX., the moment was a sour cap to an unfulfilled career — one undone when Michael fell out of favor with coach Kevin Sumlin before the Aggies began their SEC schedule.

For awhile, he maintained he didn’t understand why he didn’t get to play in that Cotton Bowl. He’d taken a majority of the snaps with the first-team offense leading up to the game.

Eight months have passed, and there’s still a hint of confusion in his voice when he’s asked about what happened.

That’s his way of taking the high road. But a glance back to the beginning of his senior year explains — at least in part — why a player with Michael’s talent received just 88 carries, and gained only 417 yards. Sumlin suspended Michael prior to a game against SMU in September for an unspecified violation of team rules. During A&M’s 48-3 win, Michael sounded off.

“Man, run the ball,” he tweeted, as Manziel and Co. struggled in the first half.

“I’ve grown a lot throughout my college career, from my freshman year up until my senior year, up until now,” Michael said, reflecting on four years he spent in College Station.

He admitted afterward to growing frustrated with Sumlin’s pass-heavy attack that relied on Manziel’s heroics. The year before, with coach Mike Sherman running his pro style offense, Michael motored for 899 yards and eight touchdowns. His senior season was different. He failed to connect with a coach who didn’t recruit him.

In a February interview with A&M’s Rivals.com site, he said he entered “his own little world” as he approached the end of his college career.

Now, he’s acclimating to a new one. And his attitude is different.

“I just want to contribute,” he said. “If they want me to be a goal-line back, or a guy that catches passes out of the backfield, I’m going to help do that.”

He caught QB Russell Wilson’s attention while playing with the second-team offense in place of injured RB Robert Turbin.

“That guy’s lightning-quick,” Wilson said. “He’s done a great job. He’s a good protector — has a knack for getting into the end zone. He’s got a lot of speed.”

The rest of training camp, Michael said, will be spent learning blocking schemes, adjusting to the speed of pro defenses and finding what lanes to hit at what time. Since WR Percy Harvin will miss most of the regular season, Michael will get a chance to compete for a spot at kick returner. His opening audition comes when the Seahawks travel to San Diego  Thursday for their first exhibition game.

If coach Pete Carroll’s early assessment of his second-round pick is any indicator, fans will like what they see — a 5-foot-10, 220-pound bulldozer capable of taking some of the load off Pro Bowl RB Marshawn Lynch.

“He’s done nothing but good stuff,” Carroll said. “He finishes, he makes an impression to you all the time about how he’s willing to bust his tail to get down the field and finish runs, finish blocks.”