Thiel: Despite PED busts, MLB still doesn’t get it

Suspensions announced for 13 MLB players, including A-Rod, seem impressive. But MLB lucked into the information, and still isn’t creating a sufficient deterrent to cheating. 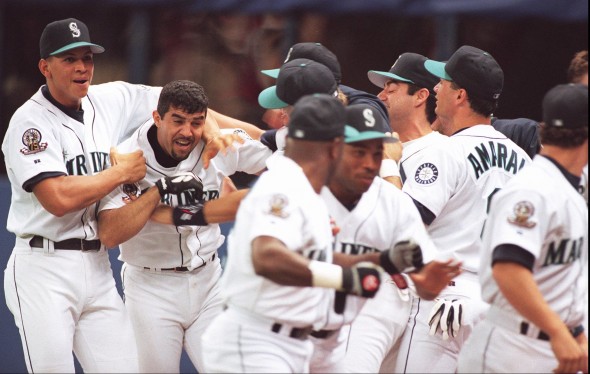 Alex Rodriguez, left, in happier times with the Mariners in the 1995 one-game playoff against California when Luis Sojo was the hero. / Seattle Mariners

Maybe the smartest thing said about Alex Rodriguez and his fellow drug cheats who were busted this week in the Biogenesis “investigation” (quotes deliberately added for mockery) was offered by Pete Rose: “I got 30 games for bumping an umpire.”Rose has never been accused of being the brightest ornament on the tree but, in an interview with Dan Patrick in the latest Sports Illustrated, nailed the point about why major league baseball accomplished little in its take-down of the latest nimrods, including Seattle’s Jesus Montero, too dumb to scrub clean their PED trails.

Rose, the one-time “Hit King” who was thrown out of the game and denied his place in the Hall of Fame for gambling on the team he managed, made the point that MLB and the players’ union aren’t fixing anything as long as the penalties for use are little more than an ump bump.

The point is not new, but bears repeating in light of the belief by some that MLB is making significant progress in eliminating performance enhancers from the game. Progress is incremental at best, and resides chiefly with the union, which is finally listening to the majority of its members who want the stain removed from the game. (Please don’t think the players earn any points for nobility; many just want to be free of the pressure to dope, and some think they know work-arounds that escape detection.)

The Joint Drug Agreement between owners and players — the industry framework from which the punishments were given to 13 players, 12 of whom accepted 50-game suspensions for first offenders — is merely a starting point, and nowhere close to driving to a conclusion.

The fact that these players, as well as Milwaukee’s Ryan Braun, whose 65-game suspension was announced earlier, accepted their fates without appeal is because of the significant documentation that was purchased by MLB investigators, who knew about the Biogenesis clinic only from work done by an alt-weekly paper in Miami. The New Times knew about it only because an employee/investor of Biogenesis snitched. The documentation existed because the players’ real names were attached.

MLB didn’t catch this batch of cheats with its testing program. Baseball investigators simply were lucky, thanks to foolishness by players and a cranky clinic investor. Lacking subpoena power, the best MLB can do is catch players with a positive test obtained under the constraints in the JDA. The Biogenesis cache of documents was manna from heaven.

Regarding the players, besides being reckless with their desires, they still knew about drug testing was underway. They knew that, if caught, they would be suspended, as have handfuls each year in the major and minor leagues.  Yet they went ahead anyway. Why?

Because the risk easily was worth the reward. Until that changes, MLB’s program doesn’t deserve the respect it thinks it should get from these busts.

For an established major leaguer, 50 games is a furlough, not a punishment. It’s less than a third of the season. Yes, it’s salary lost, but afterward, the player returns to the team, or to the free-agent market, and he gets paid handsomely with no lingering consequence except some disdain by the relative handful of fans who truly are offended.

No player and no team executive will forget the adulation for Barry Bonds in San Francisco, even at the height of the Balco controversy. Yes, the rules have tightened since then, but not enough, or the Biogenesis clinic wouldn’t have been in business with players.

Some critics have advocated for a one-year minimum for a first offense, others say a permanent ban is the only deterrent. Among the advocates for the hammer has to be U.S. Olympian Lolo Jones. The same day that MLB announced the suspension was Jones’ 31st birthday. Drug testers, as they are supposed to do in any serious testing program, showed up unannounced to test the hurdler at her home, unaware of her plans.

Jones wasn’t going to let the U.S. Anti-Doping agency poop her party. Here’s what she tweeted about the episode, collected by deadspin:

They asked me to pee at 8. I dragged em to my dinner and went at 11:45pm… They said they didn’t know it was my birthday and I had plans.

Can you imagine a major leaguer putting up with that kind of intrusion? But it’s part of the deal to be credible at the Olympic level worldwide.

Just letting u guys In my world. What it truly means to be an Olympic athlete and the accountability that holds

No drug-testing system is perfect, and the crooks will always be ahead of the cops. But in the absence of a real hammer, the success of MLB’s testing program relies too heavily on the stupidity of its players and dumb luck to be credible.

As for Rodriguez, he may be guilty of all the other charges MLB has against him, including lying and obstructing the investigation, and deserving of even more than the 211-game ban that must, by rule regarding appeals, go before an arbitrator.

But if the owners and players had in place an Olympic system that has the ability to barge in on, say, Rodriguez while getting fed popcorn by Cameron Diaz, the chances greatly increase that he would have been out of baseball already, and we could gain back our sports headlines and video time, re-committing them to important stuff, such as preseason football.