The highlight at Safeco Field Saturday won’t be Game 2 of the Seattle-Milwaukee series, but Ken Griffey Jr.’s induction into the Mariner Hall of Fame. 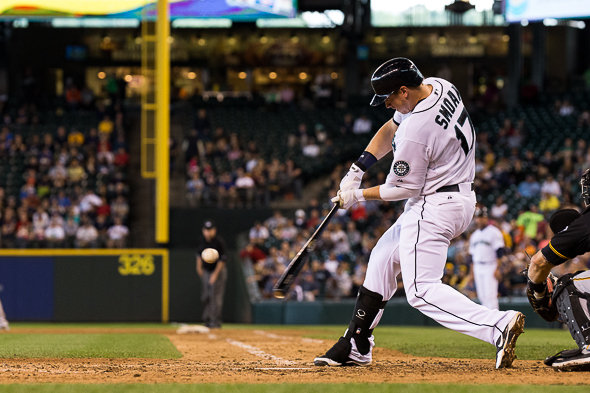 Justin Smoak got off to a fast start at the plate in August, batting .423 (11-for-26), in his first 37 at bats. He smacked a two-run homer Friday night.. / Drew Sellers, Sportspress Northwest

In 2002, coming off a 116-victory season, the Mariners attracted a record 3,540,482 customers to Safeco Field, practically a sellout every game. Coinciding with a succession of losing/blah teams, attendance has dropped every year since. Last year, the Mariners pulled in 1,723,301, lowest in Safeco Field history, 26th in baseball and a remarkable erosion of what was once the best fan base in the American League.

The Mariners are actually on pace for a slight uptick this season. Averaging 22,520 through their first 60 home dates, the Mariners have an opportunity to draw slightly more than 1.8 million. Still, unless the Mariners can clone 1995 over the next 20 home dates, they will finish with less than two million attendance for the third consecutive year.

The Mariners haven’t been as unpopular/ignored as they are now since the Kingdome days of 1988-90, the last three-year stretch when the club failed to draw at least two million in a season.

That changed when Ken Griffey Jr., drafted in 1987, began to establish himself as the best and most exciting player in franchise history. Retired since early in the 2010 season, Griffey will give the Mariners another gift Saturday, a sellout crowd to mark his induction into the club’s Hall of Fame.

Given their sub.-500 record (12.5 games behind after losing 10-5 to the Milwaukee Brewers Friday), the Mariners would have had no hope of a sellout Saturday when they play the equally uninspiring Brewers. But Griffey has turned the day into a special event, stealing the show before it starts.

Griffey will pack in more than 40,000, just the third time this season (Opening Day and June 9 vs. the Yankees) that many have pushed the turnstiles. The induction ceremony gets underway at 5:30 p.m, the less appealing Hisashi Iwakuma vs. Tom Gorzelanny matchup at 6:10 p.m.

The 32-year-old Iwakuma, a Tokyo native in his second major league season, both with Seattle, will make his 25th start and first against Milwaukee. The All-Star allowed just two runs on four hits in 7.1 innings in his last outing, but took a tough loss vs. Toronto. Iwakuma, who has never faced the Brewers, is 3-1 with a 1.91 ERA (29 strikeouts and nine walks) in his past five starts.

The 31-year-old Gorzelanny, a Chicago native in his ninth major league season an first with Milwaukee, will make his seventh start and first against the Mariners. Primarily a reliever (38 games, 6 starts) and a late substitute for scheduled starter Tyler Thornburg, Gorzelanny will be working on three extra days’ rest. He took a line drive off his pitching elbow in his last start, said he could have pitched as scheduled Wednesday night, but the Brewers opted for caution.