The Mariners and Brewers close out their three-game series Sunday with Felix Hernandez on the mound. Seattle starts a three-game set at Tampa Tuesday. 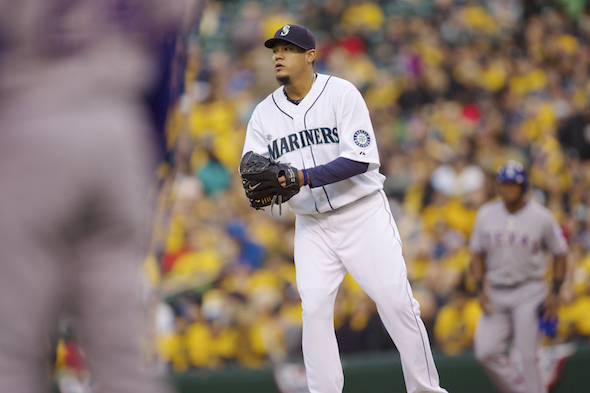 Felix Hernandez, coming off sub-par outing against Toronto, will go for his 12th victory Sunday when the Mariners close out the Milwaukee series. / Drew Sellers, Sportspress Northwest

It’s not often Felix Hernandez endures a clinker, but he did his last time out, allowing six runs (three earned) on nine hits in 5.0 innings in a 7-2 loss to the Toronto Blue Jays Aug. 6 at Safeco Field. Despite the setback, his first in a 12-start stretch dating to May 25 against Texas, Hernandez remains a viable Cy Young candidate.

He’s probably not going to catch Detroit’s Max Scherzer, who already has 17 wins and pitches for a club that figures to win many more. But he still leads the American League in ERA (2.39) and innings pitched (165.2) and ranks highly in a couple of other significant pitching categories.

Hernandez is second in the AL in Wins Above Replacement for pitchers (5.3), a tad below Chris Sale’s 5.4. He’s also sixth in walks per nine innings (1.73) and seventh in WHIP (1.09). But Hernandez probably needs another great stretch such as the one just ended if he’s going to claim his second Cy.

Sunday, Hernandez will make his first career start against the Milwaukee Brewers, who crushed the Mariners 10-0 Saturday night and have beaten Seattle a combined 20-5 in the first two games.

This is an important start not only for Hernandez’s Cy Young chances, but for the Mariners, who have one of their toughest road trips of the season looming. After Sunday, the Mariners play three at Tampa Bay, the second-place team in the AL East, and six at Texas and Oakland, the top two teams in the AL West.

The Mariners (53-63) still have a chance at a .500 record, but the trip could bury them, rendering them an afterthought for the remainder of the summer.

Hernandez will work opposite Wily Peralta, a Dominican who has never pitched against Seattle. A closer look:

The 27-year-old Hernandez, in his ninth major league season, all with Seattle, will make his 25th start and first against the Brewers. The American League ERA leader lost for the first time in his last 13 starts in a five-inning outing last Tuesday when he gave up six runs (three earned) and nine hits in five innings against Toronto.

The 24-year-old Peralta, a native of the Dominican Republic in his second major league season, both with Milwaukee, will make his 25th start and first against the Mariners. After two duds to finish an otherwise sensational July, Peralta’s 6.1 solid innings in San Francisco on Tuesday represented a bounce-back. “I think I needed an outing like that,” he said.