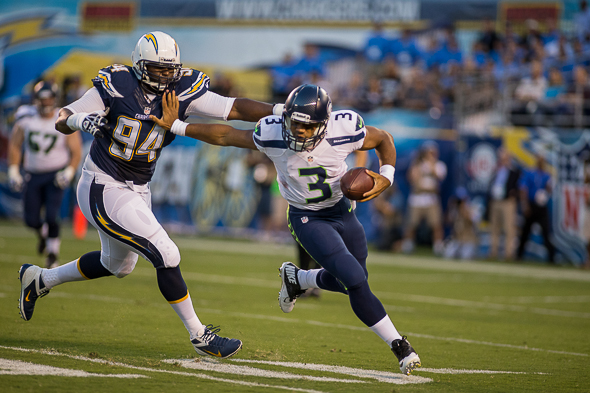 Big games from newcomers Christine Michael and Stephen Williams and veterans Tarvaris Jackson and Walter Thurmond carried the Seahawks to a 31-10 triumph over the Chargers in the NFL exhibition opener for both teams Thursday night in San Diego.

Williams, a 6-foot-5 free agent cut by Arizona who has impressed in training camp, caught passes of 41 and 42 yards from Jackson, the latter for a touchdown, as Seattle broke from a 7-3 halftime lead with 24 unanswered points. Michael, the second-round pick from Texas A&M, ground out tough yards up the middle and burst outside for a 24-yard gain in accumulating 89 yards in 16 carries.

The defense, which led the NFL in fewest points last season, didn’t show any dropoff.  San Diego’s premier QB Philip Rivers played only the first series, and led a 13-play drive that produced a field goal. Thereafter the defense pressured former Seahawks QB Charlie Whitehurst into numerous hurries, three sacks and a turnover — an interception by Byron Maxwell that he returned 28 yards to set up a touchdown.

Jackson, who came in during the third quarter after Russell Wilson had two series and Brady Quinn four, was eight of nine for 128 yards and two touchdowns. Quinn was 6 of 11 for 59 yards and a TD pass to WR Jermaine Kearse, the former Washington Husky.

Wilson, going against the Chargers’ first unit, was two of six for 23 yards, but made a couple of marvelous escapes from nearly certain sacks.

One of the few personnel mysteries in camp was who would return punts in the absence of Percy Harvin, the big acquisition who will miss at least the first three-quarters of the season after hip surgery. Thurmond, vying for the nickel cornerback spot, made his bid with a 46-yard return early in the third quarter that set up a field goal, and also had four tackles.

The Seahawks’ second and third units that played most of the game were turnover-free, moved the ball efficiently on offense and were stout on defense, holding the Chargers to 238 yards of total offense.

Jackson, who demonstrated skill with the deep ball in his one-year tenure as Seahawks starter in 2011, went deep twice and was on the money with perfect throws to Williams, the game’s two biggest scrimmage plays.

Allen Bradford, a linebacker converted from running back during his days at USC, led the defense with seven tackles. Safety Chris Moragos had Seattle’s second interception late in the second quarter, his return setting up a 61-yard field goal attempt by Stephen Hauschka, whose kick bounced off the crossbar at the end of the half.

DE Benson Mayowa, an undrafted free agent from Idaho, continued to take advantage of injuries at the position by getting in on two sacks.