Thiel: Time for fans to end ‘yes, but’ with Griffey

The legacy of Ken Griffey Jr. is a complicated saga. But controversies are done. Feats transcend his foibles. The night is upon Seattle fans to cheer his brilliance and our luck. 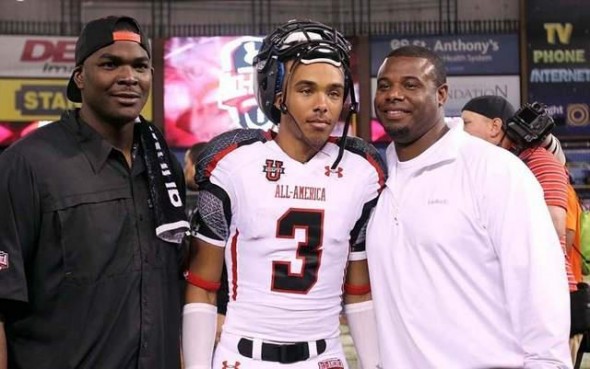 For those of us who benchmark our lives by sports events played or witnessed — a first game, a championship, a heartbreaking loss, a thrilling witness to the unexpected, a career celebrated, a passion shared  —  another milestone with Ken Griffey Jr. occurs Sept. 28, his next trip to Seattle.

From 1989, when he debuted in the Kingdome, through the 1995 breakthrough season, to the 1997 MVP award to the controversial 1999 trade to the second departure in 2009, we first arrive at the moment Saturday when he will be celebrated by a sellout Safeco Field crowd at his induction to the Mariners Hall of Fame.

Next month he will return to watch his son, Trey, play wide receiver for Arizona when the Wildcats play Washington at Husky Stadium in the Pac-12 Conference football opener.

The Kid, who played major league baseball with his father in the Mariners outfield, now has an athletic son as old as he was when Junior became a major leaguer in Seattle. In the acronym-pickled world of Twitter, the awareness is a “smh” moment — shake my head.

The passage of time strikes in ways surprising, saddening and marvelous, all at once. That the 24-year Griffey family arc now includes a Division I footballer is an awkward stretch for an imagination that insists Griffey’s theatrics were mere eyeblinks ago.

The point hit home Friday at the Hall of Fame luncheon at Safeco Field, a fundraiser for Children’s Hospital. Griffey was joined by his wife, Melissa, his father and mother, kids Taryn and Tevin (Trey is in fall camp) and his “brothers” of the glory time, who grow more sepia-toned each year — Jay Buhner, Edgar Martinez, Randy Johnson and Dan Wilson, along with Alvin Davis, whose career ended as Griffey’s began.

As the Safeco video screen displayed a splendid compilation of Griffey at bat, on the field and bases, and clowning in the dugout, it unlocked memories that seemed nearly fresh. That had the virtue of allowing Mariners fans seated at sun-drenched tables on the field to suspend without guilt the connection to the last decade’s travails and aggravations. That was a rare thing.

The Griffey era and its successes, but absent the ultimate success, creates in Seattle fandom a “yes, but . . .” reaction nearly every time 1995 or Griffey comes up in conversation. It’s a legitimate, justifiable reaction, because fans are so sick of the organization hanging its hat on a freakish six weeks of baseball, with little in the subsequent 18 years to merit any similar community exaltation (speaking of freakish: The 2001 season, take a bow and move on).

The dismay over unrequited success has the effect of diminishing the worthy deeds done at the time, for their own sakes. Yes, the continuum is relevant to fans who pay today’s dollars wanting, without real hope, a similar experience. But connecting the dreary recent outcomes with the glories diminish enjoyment of the time when so much baseball fun was had by so many.

The 1989 team that Griffey joined for the first time also had Martinez, Johnson and shortstop Omar Vizquel, all in my estimation worthy of baseball’s Hall Fame. It had Jay Buhner, whom Griffey Friday said “was the heart and soul” of the mid-90s teams. In 1993, it added the volcanic, shrewd Lou Piniella as manager.

The Mariners didn’t have a winning season until 1991 and didn’t make the playoffs until 1995, but offered compelling sports theater until after 1999, when the theater itself, the glittering, hitter-averse Safeco, helped give Griffey another reason to ask out.

Griffey himself contributed to a growing dismay because his mood would sometimes turn dark. His demands of the franchise became a fixture in the seasonal dramas (“Where’s my pitching?”). Deep down, Griffey was a shy sort, and often used humor to blunt his insecurities, especially when swarmed by adult crowd seeking some sort of piece of him.

As instantly comfortable as he was in a major-league clubhouse, batter’s box or center field, he was equally as uncomfortable with many other aspects of being of the greatest stars in baseball’s history, all the way to his final gesture as a player. Without notice to virtually anyone, Griffey, benched at 40 over a lack of production, simply jumped in his car and drove home to Orlando.

“I told people when the time came, I didn’t want a press conference or a farewell tour,” he said. “I didn’t want to be a distraction.”

For someone usually uncomfortable explaining his successes, he was not about to linger to explain his failures. But the abrupt departure was another reason for a minority of Griffey-bashers to resent him. Tolerance in some people, it seems, is low for those who are not superstars in all aspects of life.

As nearly the perfect ballplayer, Griffey could never match that standard for his off-field demeanor, at least as far as some adults were concerned. Kids were different. Griffey’s persistent work with Children’s Hospital, the Make-A-Wish Foundation and Boys & Girls Clubs testified to a generosity rare for any pro athlete in any market.

He explained a little of it Friday.

“When I came up, I was told to pick a charity,” he said of a decision not usually on the plate of most 19-year-olds. “I said Boys & Girls Clubs. I was one of them.”

In some ways, Griffey was always a kid in his time in Seattle. Immaturity is hardly a trait uncommon for superstars: From Babe Ruth to Joe DiMaggio to Wilt Chamberlain to Muhammad Ali to Pete Rose and a hundred other examples, the blessed are cursed with having their shortcomings examined, their indulgences exposed. The fate is neither right nor wrong; just part of the deal in American pop culture.

But all of the Griffey controversies are done being important; they are part of his legacy, sure, and the fan is left to choose.

What matters is that Griffey’s incandescence lit up Seattle for a decade as no athlete has, or likely ever will.

“This is where I grew up,” he said. “I became a man here, got married here and had two of my three kids here.”

Time to drop the “yes, but . . .” and embrace the notions that he was brilliant and we were lucky.