Seattle’s Aaron Harang has struggled over the past few weeks and is winless since July 22. He has allowed 14 earned runs in his past two starting assignments. 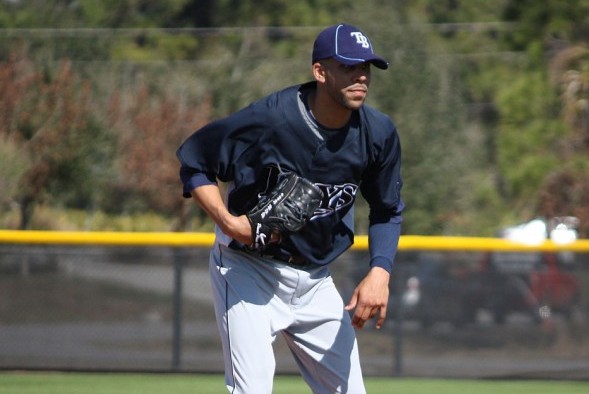 Tampa Bay’s David Price is in his sixth major league season, but has never faced the Mariners. The 2012 Cy Young winner gets his chance Wednesday night. / Wiki Commons

David Price, a three-time All-Star and the 2012 American League Cy Young award winner, has made 137 starts for the Tampa Bay Rays since they selected him No. 1 overall in the 2007 amateur draft. Price made his major league debut Sept. 14, 2008, and the Rays have faced the Mariners 37 times. No once have they used the Murfreesboro, TN., native.

The Mariners have done well to have missed Price’s turns in Tampa’s rotation. The 27-year-old ex-Vanderbilt hurler has posted five winning seasons out of six and became a 20-game winner for the first time last season when his 2.56 ERA led the American League and was comparable to what Felix Hernandez’s mark (2.28) is now.

The Mariners won’t miss Price’s turn this time. Price is the latest in a string of ex-Cy Young winners to face the Mariners this season when Seattle and Tampa play the second of three at Tropicana Field with a scheduled first pitch at 4:10 p.m.

Despite an inconsistent offense, which received two home runs out of Brad Miller in a 5-4 win in the series opener Tuesday, the Mariners haven’t done badly against former Cy Youngers. They have wins over Jake Peavy (7-4) and Justin Verlander (2-0), losses to R.A. Dickey (3-1) and Bartolo Colon (10-2 and 6-3), and a no-decision against CC Sabathia.

If the Mariners are going to beat Price, they will have to do so with Aaron Harang on the mound. Harang has lost his last two decisions, allowed 14 earned runs in his last two outings, is 1-3, 8.63 over last five, and hasn’t won since July 22 against Cleveland.

But maybe Seattle’s bats are heating up. The Mariners had 12 hits Tuesday in getting their nine-day, nine-game road trip off to a good start.

The 35-year-old Harang, a San Diego native in his 12th major league season and first with Seattle, will make his 20th start and first against the Rays. Harang hasn’t gone beyond five innings in his last three, including a two-inning stint in his most recent when he yielded seven runs on five hits and three walks to Toronto. The long-time NL veteran has never pitched in St. Petersburg, although, oddly, he made his first career start — May 25, 2002 — against the Rays.

The 27-year-old Price,  in his sixth major league season, all with Tampa, will make his 18th start and first against the Mariners. A 20-game winner last season, Price is coming off a pair of no-decisions following three consecutive victories. Price works deep into games — he has three complete games in his last seven outings. Price is a three-time All-Star.