In a rousing, emotional ceremony at Safeco Field, teary-eyed Mariners’ icon Ken Griffey Jr., entered the club’s Hall of Fame to the delight of a sellout crowd. 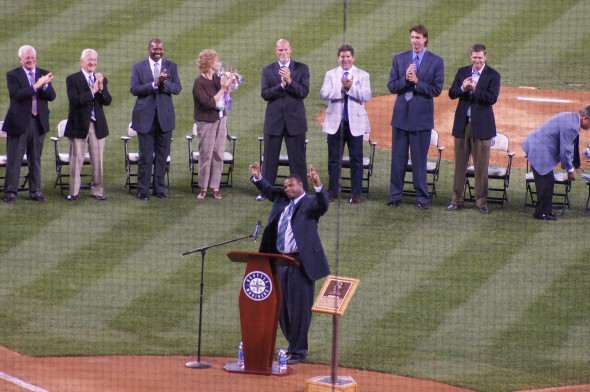 Ken Griffey Jr., with former teammates, friends and family behind him, salutes an agog Safeco Field crowd Saturday night following his induction into the Mariners Hall of Fame. / Scott Johnson

The third time was a charm for Ken Griffey Jr.

Having stumbled through his first two good-byes to the city of Seattle, he finally made an exit Saturday night that was memorable for all the right reasons.

One of the biggest stars in Seattle sports history was a heroic figure again, and he hit every note with perfect pitch. On the night when he became the seventh member of the Mariners’ Hall of Fame, all else was forgotten.

There was no mention of his trade demands following the 1999 season, which eventually led to an unceremonious exit as he packed his bags for Cincinnati. Nor did anyone seem to remember the way his second tour of duty ended abruptly, with a legendary 2010 phone call from Montana — on an unannounced drive to Florida — to tell the Mariners he was calling it quits.

Griffey recalled the latter incident during his Friday press conference, when he made no apologies and said he never wanted to be a distraction. Comfortable with the spotlight for his entire playing career, Griffey preferred to be out of it when the end came.

And so there he was Saturday night, back on the proverbial stage for a moment that seemed long overdue. 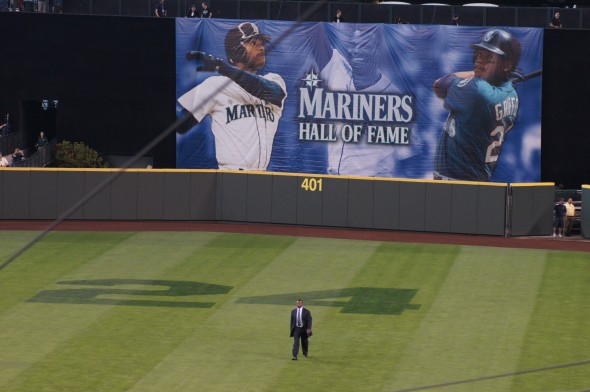 Underneath the giant screen at Safeco Field, Griffey walked from an entry in center field toward home plate and his induction ceremony.. He said he felt like a “bullpen reliever” as he made the walk. / Scott Johnson

The stands were filled for the first time all season. About 80 percent of the Mariners jerseys in the stands were sporting the No. 24, a number that was also painted in centerfield. A pre-game video featuring interviews with current Mariners Felix Hernandez and Raul Ibanez but also included major league stars from elsewhere, such as Boston’s David Ortiz, the Angels’ Mike Trout, ex-Royals star Bo Jackson and Hall of Famer Willie Mays.

Even Ichiro Suzuki, wearing a New York Yankees uniform and speaking in perfect English, was shown turning his hat backward before calling Griffey “my hero.”

“A once-in-a-lifetime player,” gushed Angels manager Mike Scioscia on the video screen. No one at Safecowas arguing.

As the video played, a group of Mariners legends including Randy Johnson, Edgar Martinez, Jay Buhner and Dan Wilson filed in to be among the people sitting behind Griffey on the field in a stadium once famously called by radio announcer Dave Niehaus, “The house that Griffey built.” Current Mariners players stood in the dugout, each with his hat turned backward, and looked on as if Shoeless Joe had just walked through an Iowa cornfield.

When it was time for Griffey to speak, he at one point turned to the Mariners dugout and addressed the current players. 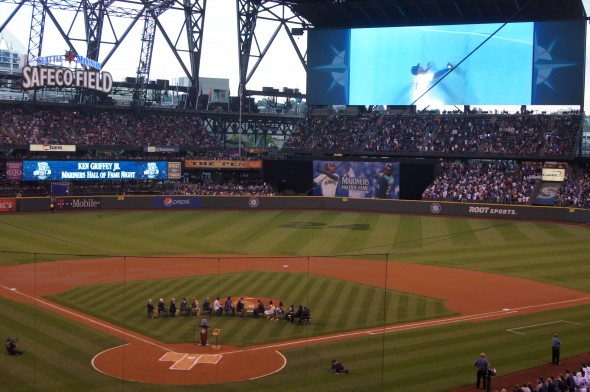 “We were just like you,” he said. “We grew up. We believed in each other, and we made it happen. And you guys can do it too.”

He also defended the three most high-profile members of the longtime front office, saying of oft-criticized execs Howard Lincoln, Chuck Armstrong and John Ellis: “If you think these three guys don’t want to win, you’re sorely mistaken . . . They want to win and bring a championship to this city.”

Griffey pitched the proverbial perfect game. The scene played out just as longtime Mariners fans would have wanted, with the legendary hero returning for one last goodbye – and this time, no controversy.

It was hard not to notice that the team in the other dugout, the Milwaukee Brewers, was playing without its most recent superstar because of a suspension for PED use; Griffey is often seen as one of the only great sluggers from his generation whose name has never been tied to steroids. 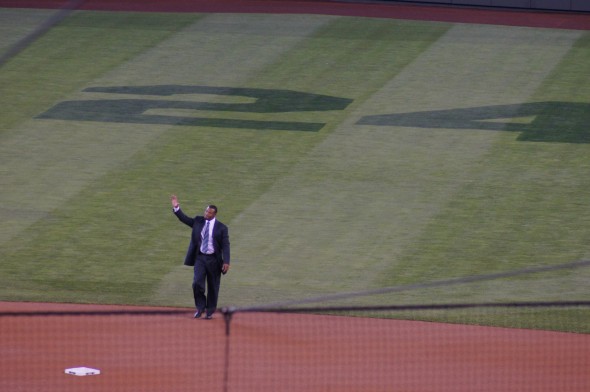 Griffey’s No. 24, cut into the Safeco Field grass, provides the backdrop as Griffey salutes the crowd / Scott Johnson

Griffey’s great moment scame between the lines, and there he was again. Fans couldn’t take their eyes off him.

A final time, Griffey was greeted with a standing ovation. He broke into tears as fans remained on their feet through the hour-long ceremony – delaying the start of the game by more than 30 minutes.

As he walked up to the podium to speak, wiping away tears, fans began chanting his name.

When Griffey finally addressed them, he said: “I can honestly say I am thankful to be a part of the Seattle Mariners.”

While a memory will linger of Griffey of his last time in uniform as a 40-something star who fell asleep in the clubhouse and eventually left his team, Saturday night seemed to make all that go away.

The smile, the sweet swing, the slide into home, the Spiderman catch and trademark backward hat – that’s what Griffey left Saturday night.