Injuries and Larry Fitzgerald kept getting in the way for Stephen Williams in Arizona. But 6-foot-5 receiver, undrafted out of college, is suddenly and exactly what Pete Carroll wants. 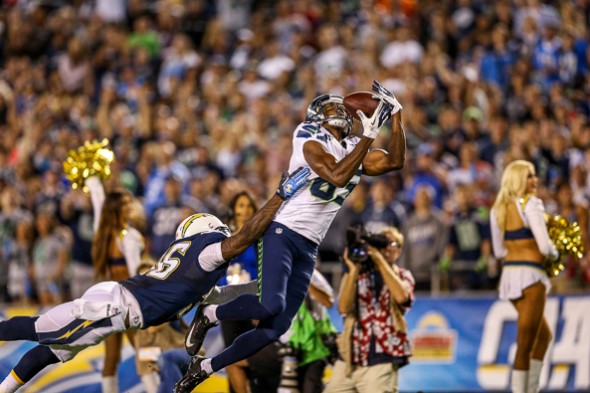 Best buy from the Seahawks’ off-season shopping on the blue-light-special table appears to be Stephen Williams, a 6-foot-5 receiver who dwelled in the shadow of all-pro Larry Fitzgerald in Arizona for three seasons. After his two splendid catches in the Thursday night exhibition-opening win in San Diego, Williams dazzled and puzzled Pete Carroll.

“Matter of fact, I sat him down after the game and just asked him about it,” said the Seahawks coach after practice Sunday. “I was just curious and asked him, ‘What happened (in Arizona)?’ He looks like such a legit player and can be a factor.”

Williams, an undrafted free agent from Houston who played college ball at small-time Toledo, had 10 games in 2010 for the Cardinals, two in 2011 and sat out 2012 when he tore his Achilles tendon “right off the bone,” he said. He has 11 NFL catches for 101 yards.

He’s barely more experience than a rookie, yet he’s 27. But he is the prototype wideout that Carroll always seeks but does not have on his roster.

“I’ve always liked 6-5 guys,” Carroll said. “It’s worked out quite well in the past. We got kind of a role for guys that are like that. He’s the only guy.”

Williams pulled down a 41-yard pass from Tarvaris Jackson to set up a score, then caught another well-thrown ball from Jackson, a 42-yarder for a touchdown, replicating the kind of productivity that has caught the eyes of everyone watching training camp.

His Cardinals teammates were just as impressed. Safety Kerry Rhodes told the Arizona Republic, “I have no idea how this kid didn’t get drafted, but he’s a beast. Whether he’s going up against the third team, the second team or the first team, he’s a beast.”

The catches Thursday came against the Chargers’ backups, but showed an ability to fight free of coverage while maintaining concentration. Add that to his height and a 38-inch vertical leap, and suddenly the issue of depth at the wide-receiver position, viewed ominously after the hip surgery of newcomer Percy Harvin, is on fade.

“It’s kind of exciting that he did it (in practice) and he did it in the game, so we’ll see in the next couple of weeks,” Carroll said. “We hope that he can continue to create for us. He’s having a great camp. I’m really excited for him.”

The Seahawks signed Williams in January to a two-year, free-agent deal worth $1.2 million, a transaction that flew under the radar because of his tepid NFL history.

“Just injuries,” he said after practice Sunday, explaining his low profile. “Here, there are more opportunities for me to compete. The last three years I was playing behind Larry Fitzgerald, one of the greatest receivers ever, so I can do nothing but learn from him. When I came to another team, I had another opportunity to show my skill set. I’m trying to take advantage of it.”

Seahawks GM John Schneider spotted Williams in college, but the 2010 draft came and went with no NFL team interested until Arizona added him as a free agent. When he was cut, Williams knew where he wanted to land.

“I remembered John from college, so when I got the opportunity to be on the market, I told my agent to make this happen,” Williams told Yahoo! Sports early in camp. “It seems like a great opportunity with a young team, and a great quarterback on the uprise. I want to be a part of it.

“I always thought I was going to be here anyway. Being here now, and how Pete Carroll is running things – it’s a new beginning for me.”

Williams offered up an endorsement of Carroll that should reverberate among players around the NFL.

“There are no politics over here on this team,” he said. “If you come here and you work hard, you’ll get a job.”

“It does affect him,” Carroll said. “Some of the other (receiver candidates) are really good on special teams, and he has to catch up to them there.”

Special teams work would be nice add for Williams, but Carroll’s success in college and the pros with big receivers who can outleap defenders is a virtually irresistible asset, particularly since no one else in camp does what he can do.

“We’ll be feeding him the ball — he’s going to get a lot of action in the next three games and see where he fits,” Carroll said. “But his uniqueness catches my eye. I’m always looking for something that adds to the whole group. I’m really thinking positively about him having a chance to factor in for us.”

If Williams makes it, he will add another log on the Seahawks’ personnel fire of perceived disrespect from being overlooked (Baldwin, Richard Sherman, Brandon Browner and, oh yeah, Russell Wilson, among others). There’s so much I’ll-show-you in Renton, the nickname might have to be modified to the Seethe-hawks.