The Sounders take a four-match unbeaten streak into Houston, where Clint Dempsey will get his first start as a Sounder. Eddie Johnson is suspended a Obafemi Martins is hurting. 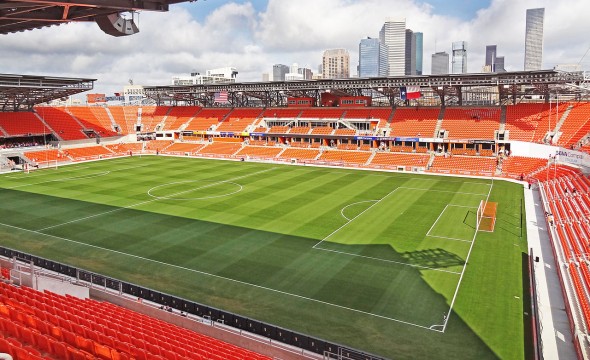 The Sounders play their first match in BBVA Compass Stadium in Houston Saturday. Seattle will be looking for its fourth consecutive victory. / Wiki Commons

With Eddie Johnson serving a one-game suspension and Obafemi Martins (ankle) not having engaged in a full week of practice, all signs point to newly acquired designated player Clint Dempsey making his first start for the Sounders Saturday when they take on the Houston Dynamo.

Dempsey participated in Sounders training all week. Head coach Sigi Schmid declared him “ready to start” against the Dynamo.

“It’s tough in the heat and humidity, but he’s sort of used to that,” Schmid told mls.com Thursday. “He grew up in Texas. It’s just a question of how many minutes (he will play). He’s a smart enough player to know how to manage his minutes.”

Martins suffered an ankle injury against FC Toronto last week and had to be replaced by Dempsey. His status for the match is uncertain, as is that of Brad Evans, who played for the U.S. Men’s National Team in a friendly against Bosnia-Herzegovina in Sarajevo Wednesday and logged thousands of air miles to rejoin the Sounders in Houston.

With three consecutive wins and no losses in their last four, the Sounders moved into a tie for fifth place in MLS West, seven points behind Western Conference leaders Real Salt Lake with three games in hand.  Seattle ranks third with an average of 1.62 points per game, challenging the pace of the Supporters Shield leaders.

With a victory, Seattle can match the longest winning streak in MLS this season. Three teams (Montreal, New York and Salt Lake) have had four-game winning streaks, and no team has accomplished the feat since the end of June.

During the streak, the Sounders recorded eight goals, including three straight multi-goal games. Seattle ranks fifth in MLS with four three-goal games, and is T4 with 10 wins.

The Sounders are unbeaten in five straight (3-0-2) against the Eastern Conference, and have earned the third-most road wins (4) in MLS this season. Saturday’s match will be Seattle’s first at BBVA Compass Stadium.

“Everybody I know that I’ve talked to that has played there has said that it’s a good place to play,” Schmid said. “The field’s good, the surface is good and the atmosphere is good.”

Led by goalkeeper Tally Hall, the Dynamo has been the league’s second-best defense this season with a 1.00 goals against average.

SERIES: Dates to July 11, 2009, when the Sounders scored a 2-1 victory at CenturyLink field on goals by Fredy Montero and Patrick Ianni. In seven matches between the clubs, Seattle has outscored the Dynamo 10-8. In the last match between the clubs (March 23, 2012), the Sounders won 2-0 on goals from David Estrada and Brad Evans.

COMING UP: The Sounders return to CenturyLink Field Aug. 25 to face the Portland Timbers and conclude the month with a visit to the Columbus Crew Aug. 31.