The Pac-12 is spending some free-flowing cash on a regional ad campaign to get DirecTV to quit in favor of its network. Why would many viewers surrender better programming? 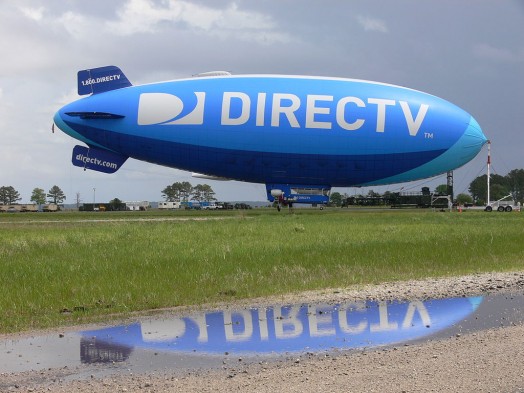 The Pac-12 has picked a fight with a foe, DirecTV, that has its own air force, as seen at an airfield in North Carolina. / Wiki Commons

The Pac-12 Networks are beginning an advertising campaign to get West Coast college football and basketball fans to tell DirecTV to drop dead. To which DirecTV will respond with a yawn so powerful that it may alter the Earth’s rotation.

The reason: When it comes to the satellite distribution of popular play-by-play sports programming, DirecTV is the biggest SOB in the valley. As the nation’s largest satellite TV service, with more than 20 million subscribers, it doesn’t need the Pac-12 Networks at the price sought by the regional purveyor of non-profit amateur athletics.

One good thing from the year-long dispute is that the Pac-12 Net is making so much money it can afford to throw some at ad agencies to make its futile argument. Ad creators need jobs too. As with journalists, it is not good for the public to have a lot of them on the streets. It’s a matter of civic hygiene.

The “Compare” campaign (see link above), which debuts Monday on broadcast and cable TV, social media and print, is tailored to each of the 12 markets and plays on each mascot. In western Washington, the “Huskies” on DirecTV are portrayed as real dogs pulling sleds. Then a narrator interrupts the documentary-style presentation with this script over an image switch to Huskies QB Keith Price: “These are the kinds of Huskies you’ll see on DirecTV. These are the kind you’ll see on Pac-12 Networks. If you want every Washington football game, you don’t want DirecTV. Drop DirecTV and get Pac-12 Networks today.”

Clever, but unlikely to cause DirecTV to go all Yosemite Sam.

Part of the smugness comes from the ability of satellite TV to deliver a signal to any household/business with a dish. Cable from Comcast or Time Warner typically needs to drag a line to each customer, which is cost-effective in urban areas. But Pac-12 geography is the college nation’s largest, with the least population density. The cable companies can never reach full saturation.

The rest of the smugness comes from the fact that DirecTV offers exclusive content in other sports that has proven very popular. The big draws are NFL Sunday Ticket, which provides every out-of-market game, and for premium subscribers, the Red Zone Channel, with every scoring play, all in HD.

The MLB package includes Extra Innings, up to 80 out-of-market games a week. Then there’s other specialty offerings such as NBA League Pass, NHL Center Ice, MLS Direct Kick and a welter of other sports, including other college football and basketball.  Bundled into DirecTV’s standard offerings are the same ESPN channels available on expanded basic cable packages.

So for the serious sports fan among DirecTV subscribers, as well a niche fan that favors one sport, the ask of the Pac-12 Networks is large: Give up all the choices DirecTV offers for single conference’s football games. Yes, men’s basketball is available too, but the ardor is much less for hoops, and it’s practically non-existent for all the non-revenue sports that fill the rest of the 24/7 TV calendar. The Pac-12 Net reruns a lot of football games, but fans who can’t watch a game live usually take the option of recording to play back at a time of their choice.

Pac-12 Conference commissioner Larry Scott bleats that the Pac-12 carriage deal was good enough for 55 other carriers in the West. The net is charging distributors about 80 cents per in-market subscriber. But that’s too much for too little, in the view of the big dog.

Reports in the industry trades suggest DirecTV has offered to carry the Pac-12 Net as a separate channel rather than in a programming bundle, for a separate monthly fee. But the conference has resisted because it would mean fewer viewers and fewer advertising dollars.

Jon Wilner of the San Jose Mercury News reported that DirecTV, headquartered in Lakers country at El Segundo, CA., gets $3.40 per sub for the Lakers. But the Lakers started at $3.95 until DirecTV held firm. And it gets so much per sub because it’s the Lakers,  and it’s LA.

DirecTV puts forward its position on its website: “We have the same passion for sports as the most loyal fans and want to add Pac-12 Network, but DirecTV has not joined other providers in accepting Pac-12′s high price for two reasons:

First, we cannot allow all of our customers to absorb price increases well beyond the nominal adjustments we make to their monthly bills.

“And second, we believe very strongly that when a channel’s cost is too high, our customers must have a choice over whether they want to pay for it or not. Unfortunately, Pac-12 doesn’t see it that way and has been withholding games from its most loyal supporters to force everyone to pay its unnecessarily high price.”

If the Pac-12 should knuckle under to DirecTV’s price, then it would be obligated to offer the same price to other carriers, or risk rage among them. Obviously, the Pac-12 has decided that it would rather spend money on an expensive regional ad campaign than lose money over the longer term by giving in.

I imagine the campaign might induce some fans of one sport in one conference to abandon DirecTV. But Scott’s been at it a year and hasn’t drawn away enough subscribers to make the satellite-sports kingpin care.

Ask yourself what would it take to get DirecTV to care: Say, a five percent loss of national business? From a subscriber base of 20 million, that would be one million customers abandoning the dish for something else in a region where cable access is more limited than most. I’m a little skeptical, because there’s only 1.4 million DirecTV subscribers in the Pac-12 region.

Upon its one-year anniversary, the Pac-12 Net is running with the big boys in the national sports scene. Remember that DirecTV was the owner of Root Sports, and the parent company was financially secure enough to sell majority interest in the regional sports network to the Seattle Mariners, its anchor programming. DirecTV wouldn’t have done it if wasn’t coming out ahead.

DirecTV plays a lot of hardball. . It has held out against the regional sports network in Houston, a Comcast-owned property that carries the Astros and Rockets, and held out against carrying the Blazers in Oregon. UPDATE: DTV and Fox Sports 1 reached agreement Thursday, carrying the the new rival for ESPN at 23 cents per subscriber. FS1 had been asking 80 cents, and caved in order not to lock out viewers from the start.

And soon a real test of its steel will be upon DirecTV — the deal with the NFL for the lucrative Sunday Ticket franchise is up after the 2014 season.

So the Pac-12 has picked a fight with a formidable adversary used to big-boy brawls. If the campaign doesn’t work, it might be time for Scott to consider whether the Pac-12 is smitten with its own wonderfulness.