The Mariners play their final game of the season at O.Com Coliseum Wednesday afternoon and then return to Safeco Field to begin a three-game set with the L.A. Angels Friday. 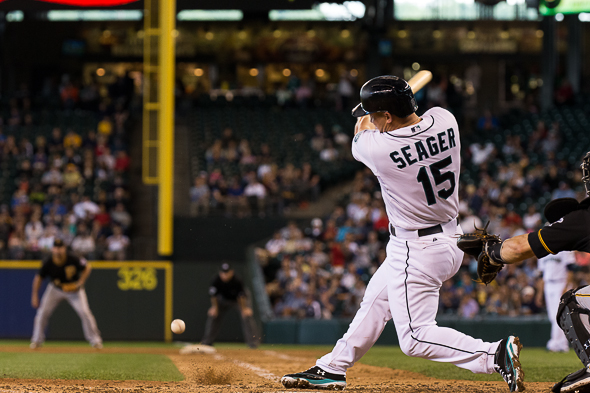 Kyle Seager and the Mariners rallied from a 4-0 hole and defeated Oakland 7-4 Tuesday night. The three-game series ends with a matinee Wednesday. / Drew Sellers, Sportspress Northwest

Based on their record after 125 games (58-67), and eliminating a major surge or collapse, the Mariners will probably finish third in the AL West, anywhere from 10 to 15 games behind the Rangers and Athletics. It will be the 12th consecutive year with no playoffs and written off as another lost season.

It sure could have been different. The Mariners have lost 28 games decided by two or fewer runs and 21 times in one-run games. They have suffered 10 walk-off defeats and been beaten 19 times in their opponents’ final at-bat.

Those are killer numbers, and so is this: a Mariners starting pitcher has tossed at least 7.0 innings and allowed one earned run or less 29 times (most recently Aaron Harang Monday). That is tied with Detroit for first in the American League and for third in the majors. The Tigers and Dodgers (30) are nearing division titles and the Mariners are headed toward another Fan Appreciation night.

Another example of lost opportunities: Hisashi Iwakuma ranks eighth in the AL with a 2.95 ERA, is fifth in strikeout-to-walk ratio (4.71) and second in WHIP (1.00). He’s also tied with Bartolo Colon of Oakland with 10 quality starts without allowing a walk. Iwakuma failed to get a win in four of those starts.

Iwakuma gets the call against Oakland Wednesday afternoon when the Mariners close out a weird three-game series with the Athletics. After another one-run loss in the series opener Monday, the Mariners dug themselves a 4-0 hole Tuesday within the first five batters of the game, then blew the game open with a five-run eighth inning to win 7-4. It marked only the third time in 53 games that Seattle won when trailing after seven innings.

Iwakuma, coming off a 3-1 win at Texas, will be seeking his 12th victory. He’ll oppose A.J. Griffin, a right hander who lost to the Mariners June 15 but is 3-1 lifetime against Seattle.

A victory Wednesday will not only give the Mariners another series victory, it would finish off a winning (5-4) road trip, which seemed unlikely when they began the nine-game swing against playoff contenders Tampa Bay, Texas and Oakland.

The 32-year-old Iwakuma, a Tokyo native in his second major league season, both with Seattle, will make his 27th start and fifth against the Athletics. Iwakuma is 2-2 with a 3.96 ERA in four meetings against Oakland, splitting a pair in the Bay Area. Iwakuma beat Texas 3-1 Friday to snap a three-start winless streak.

The 25-year-old Griffin, an El Cajon, CA., native in his second major league season, both with Oakland, will make his 26th start and third against the Mariners. Griffin has allowed 11 walks in 10.2 innings over his past two starts after allowing 12 over 64 innings in his previous 10. He limited the Indians to a lone unearned run in five innings his last start, walking five and giving up four hits.