Propelled in the first quarter by two touchdowns that exceeded 100 yards, the Seahawks shot to a 33-7 halftime lead playing primarily against Broncos’ starters. 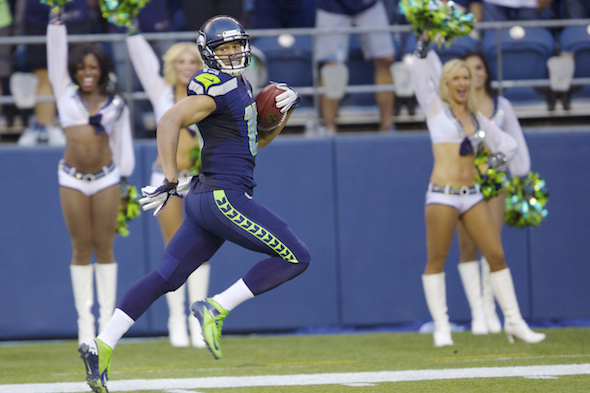 Seahawks WR Jermaine Kearse nailed down his roster spot after scoring a touchdown on a 107-yard kickoff return. / Drew Sellers

While much of the NFL bumbled through miscues that typically permeate preseason football, the Seahawks’ defense and special teams were all highlights and hijinks Saturday at CenturyLink Field.

Boosted by CB Brandon Browner’s 106-yard return via fumble recovery and a 107-yard kick return from former University of Washington star Jermaine Kearse, Seattle pounced on the Broncos in the first half of their second preseason game for a 40-10 win.

The defense forced three first-half turnovers, which offset Denver outgaining Seattle in total yards, 209-173. The offense, for the second week in a row, had no turnovers.

QB Russell Wilson and most of Seattle’s first-team offense played the entire first half.  Wilson fumbled the snap before finding Kearse for a 12-yard touchdown reception in the first quarter, then hit TE Sean McGrath on a 3-yard strike with 37 seconds remaining in the second.

Offensive coordinator Darrell Bevell expressed disappointment with how the first-team offense performed last week during a 31-10 win against the Chargers. They looked much different operating against Denver’s first-team defense.

He probably could have done without the 12 penalties that cost 107 yards  — six of which lost 65 in the first half.

But, they made up for it in other ways.

Wilson completed eight of 12 passes and finished with 127 yards and two touchdowns while RB Robert Turbin rushed nine times for 35 yards. The first-team offense also had a trio of three-and-outs, but for the second consecutive week owned the turnover battle (4-0).

“The most important factor that’s happening right now is that we’re not giving the football up,” Carroll said. “That’s how we intend to play forever.”

Kearse, in his second season, entered training camp as one of the players who could most benefit from an injury to WR Percy Harvin, He seized the opportunity since Seattle’s expensive off-season acquisition underwent hip surgery in early August. The Lakewood native’s one catch on Saturday went for a touchdown, and his 107-yard kickoff return, including a stout stiffarm, was made more impressive by this fact: He never returned a kick during his college career.

“It was nice. I haven’t returned a kickoff since high school,” Kearse said.

Carroll said he opted to give the wideout the chance to return kicks instead of CB Jeremy Lane because offensive players are generally more comfortable with taking a hit and holding on to the ball. Earlier in the week, Kearse told Wilson he would return one for a touchdown if he received the opportunity.

“He took advantage of it,” Carroll said. “He did about as well as you could do cranking out your first opportunity. Beautiful.”

Seattle opened the game in nickel coverage, with five defensive backs, and forced a three-and-out, as Manning completed just one of three passes. And since DE Cliff Avril and DE Chris Clemons are working their way back from injury, that meant Benson Mayowa, an undrafted free agent from the University of Idaho who began training camp as a fourth string defensive end, made the start.

In 2012, his Vandals finished 122nd in the nation in points allowed, surrendering an average of 42.4 points per game. Based on Mayowa’s first career start, he wasn’t part of the problem.

Mayowa and DE O’Brien Schofield recorded two of Seattle’s four sacks in the first half.

Carroll improved to 21-9-1 all-time against the spread in preseason football games. Vegas oddsmakers had installed Seattle as four-point favorites against the Broncos. The Seahawks have won seven  consecutive preseason games back to Sept. 2, 2011, when they won 20-3 in Seattle against the Oakland Raiders.

On a night filled with spectacular touchdowns, WR Stephen Williams might have notched the most impressive play from scrimmage. His 38-yard dive-and-catch came late in the third quarter courtesy of backup QB Tarvaris Jackson. Williams laid out, sneaked both hands under the ball while managing to avoid the touch of two Broncos defenders, before diving backwards into the end zone. He led Seattle with two catches for 45 yards.