#127: Wedge Back In Dugout For Angels Series

Out since July 22 after suffering a minor stroke, manager Eric Wedge returns to the dugout Friday night when the Mariners begin a three-game set with the Angels. 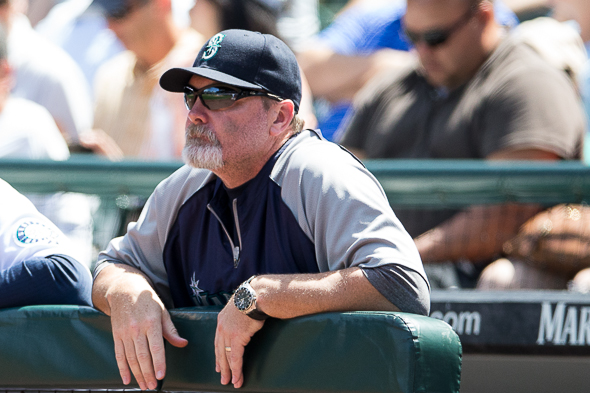 Eric Wedge, out since July 22 when he suffered a minor stroke, will return to Seattle’s dugout Friday when the Mariners and Angels begin a three-game series. / Drew Sellers, Sportspress Northwest

After what had to have been one of the scariest months of his life, Eric Wedge will return to the dugout Friday night when his Mariners open a three-game series with the Los Angeles Angels at Safeco Field. Wedge suffered a minor stroke July 22 and has been convalescing since, apparently with enough success that his doctors have cleared his return.

Wedge catches the Mariners on an uptick. Under acting manager Robby Thompson, Seattle went 13-15 during Wedge’s absence, capped off by a 5-4 road trip through Tampa Bay, Texas and Oakland, all clubs in playoff contention.

“Great road trip. Proud of these guys,” Thompson said. “Obviously, all three of these teams are either in first or second place. They’ve been playing well all year long. Looking back on it, it could have been even a little better. We had a chance to win a couple more ballgames, but overall, playing the teams that we played on this tough road trip, we feel it was a great road trip.”

Felix Hernandez (12-6, 2.47) gets the ball to start the home stand. Hernandez is coming off a rough outing in Texas, where the Rangers roughed him up for five hits, five runs and five walks in 5.0 innings in a brutal 15-3 loss Saturday.

Texas has beaten Hernandez 19 times and the Angels are only slightly less of a nemesis. He’s 8-12 with a 3.97 ERA in 33 career starts against the Halos, who torched Felix for 12 hits and six earned runs over 5.0 innings in a road loss June 20.

Hernandez, though, will catch a reeling Angels ball club. L.A. has dropped nine of its past 11. The Angels were just swept at home by the Cleveland Indians.

The Mariners don’t have a lot to play for over the next month, but they do have an opportunity to finish in third place in the division ahead of the Angels.

“We’re playing a lot of playoff teams down the stretch — a lot of teams that are first or second in their division — and I think it’s big for us because we get to see how we stack up right next to them,” Mariners rookie Brad Miller told mlb.com. “Our goal is the same. We’re trying to win games and win series.”

The Mariners have captured their last two series and Friday will take a look at right-hander Garrett Richards, who will make his sixth start since rejoining L.A.’s starting five. Richards has improved from his early season form since returning to the rotation July 27, going 1-1 with a 3.38 ERA. He surrendered five runs and 12 hits, but whiffed seven his last time out against the Astros Saturday.

The 27-year-old Hernandez, in his ninth major league season, all with the Mariners will make his 27th start and fourth against the Angels. The Mariners ace allowed five runs in five innings at Texas Saturday, equaling the number of earned runs he’d allowed in his previous six starts and 43 innings. He’s beaten the Angels twice this year, both times at Safeco Field.

The 25-year-old Richards, a Riverside, CA., native in his third major league season, all with the Angels, will make his 10th start and second against the Mariners. Used mostly in relief this season, Richards joined the rotation July 27 and has one win, one loss and three no-decisions since, including one in his last start Aug. 17 vs. the Houston Astros.