Record Throng Due For Sounders, Timbers

After two-thirds of a season, the Sounders may finally be able to field their first-choice lineup when they take on the Portland Timbers are CenturyLink Field. 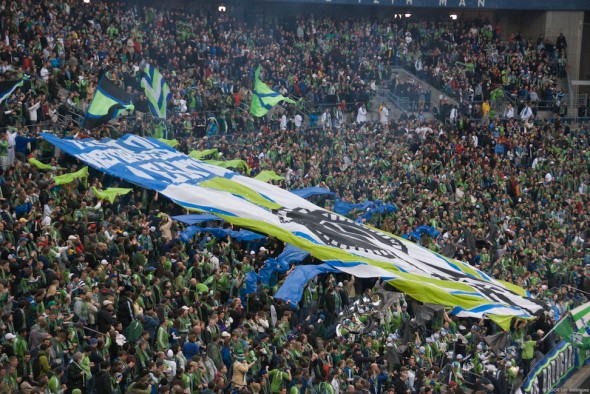 The Seattle Sounders and Portland Timbers figure to have an uproarious crowd of more than 67,000 for Sunday night’s match at CenturyLink Field. / Wiki Commons

For Clint Dempsey’s CenturyLink debut Sunday night against the Portland Timbers, the Sounders will have 67,000 scarf-waving fanatics, which will challenge for the largest soccer attendance in Northwest history — 67,052 that witnessed a Seattle-Manchester United friendly July 20, 2011. From the local perspective, that one didn’t go so well, a 7-0 hosing.

Even if the Sounders and Timbers fail to top the mark, the crowd will be the largest of the season in MLS and largest for a Cascadia Cup match.

Flummoxed 3-1 by the Houston Dynamo in Dempsey’s starting debut, the Sounders sport a club record nine-game (6-0-3) home unbeaten streak. Seattle has not dropped a contest at the Clink since the season opener March 2. A win or a draw Sunday would match the second-longest home unbeaten streak in MLS this season (San Jose has a 12-game streak).

The match with Portland will mark the fourth Cascadia Cup contest of the season for Seattle. The Vancouver Whitecaps lead the regional competition with five points through four games. Seattle has four and Portland three. The Timbers are the current Cup holders, and Seattle has the home-field advantage this season with four games at the Clink.

The Sounders have been scoring goals at record rate at home. They average 2.00 per match and are on pace to surpass the 2011 average of 1.88. But scoring against Portland won’t be easy. The Timbers have evolved into one of the league’s top defenses, leading all MLS clubs with a 0.96 goals against average and just 25 goals conceded.

Goalkeeper Donovan Ricketts has contributed significantly to the defensive success. Ricketts leads the league with a 0.91 goals against average, nine shutouts and a 75.6 saves percentage. The 2010 Goalkeeper of the Year and 2011 MLS Cup winner with Los Angeles is in his first full season with the Timbers, and fifth in MLS.

In addition to Ricketts, midfielder Diego Valeri has developed into one of the league’s premier playmakers. Valeri has assisted on seven of Portland’s last nine goals, recording seven assists over the past five outings. Overall, Valeri ranks second in MLS with 11 assists, and has added four goals. In 21 games, he has already set the club record for assists in a single season, breaking Jack Jewsbury’s mark of eight in 2011.

For the Sounders, the major intrigue is whether they can field their first-choice lineup for the first time this season. Due to injuries, suspensions and international duty, it’s yet to happen.

The biggest questions involve Obafemi Martins, Osvaldo Alonso and Djimi Traore, who were limited in practice all week until Friday, when they were full participants. Even if Martins doesn’t start, coach Sigi Schmid said he hopes to get him on the field with Dempsey and Eddie Johnson for the first time.

“That’s what we want to see,” Schmid told reporters this week. “We haven’t really had the opportunity to play all three of them at the same time. We just have to figure it out. You don’t know until you stick them out in a game for sure and see what everyone’s tendencies become and what they do or don’t do when pressure hits. That’s when you can really tell if it’s going to work in a certain formation or not. That’s something that’s still ahead of us.

According to Schmid, Dempsey isn’t 100 percent fit, but made significant strides in training this past week.

“The week of training has been good for Clint in terms of building up his fitness, working on his touches,” Schmid said. “We did a pretty heavy day with him on Wednesday and he felt good about that. He said it helped him fitness-wise and touch-wise.

“Now it’s just a matter of him just not putting too much pressure on himself to get that first goal or try to get that first assist. Just let it come. Once it comes, he’ll be settled and I think it will help our team.”

COMING UP: Seattle concludes the month with a road trip to the Columbus Crew Aug. 31. Sounders will play three straight at CenturyLink Field, beginning with the Sept. 4 match against Chivas USA.