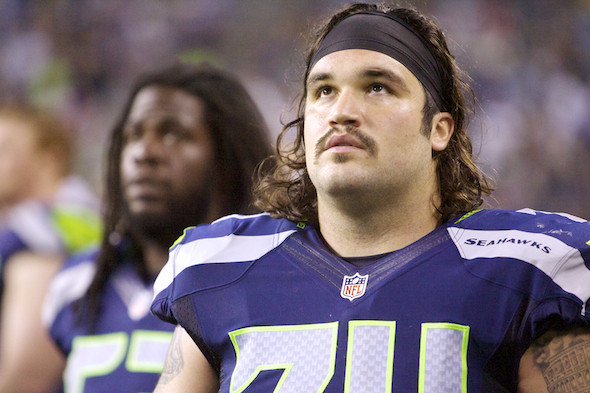 The experiment in converting J.R. Sweezy from a defensive lineman to an offensive lineman is apparently a success, because the Seahawks flushed former third-round (2011) draft choice John Moffitt. He was traded to Cleveland Monday for defensive end Brian Sanford, who has played six games in three years.

Moffitt, 26, from Wisconsin, started nine games his rookie season and six last year at both guard spots, but the more athletic Sweezy’s improvement was sufficient to jettison Moffitt.

The emergence of tackle/guard prospects in Alvin Bailey and Michael Bowie helped make Moffitt expendable. The Seahawks also have one-time starters Paul McQuistan and James Carpenter at guard, although the latter has a torn plantar fascia and is sitting out practice.

“The way it was explained to me is that they needed D-linemen,” Moffitt told KJR-AM radio Tuesday. “And I was the most valuable guy they could part with. And that was that. Honestly, I look at it as business. And I just keep playing ball.”

Sanford (6-foot-2, 280 pounds), signed as an undrafted free agent from Temple, will add depth to a position where the Seahawks are temporarily thin. None among Chris Clemons, Bruce Irvin and Cliff Avril played in Saturday’s 40-10 walloping of the Broncos. Little pass rush was evident.

Irvin is suspended for the first four games for violating the NFL’s substance abuse policy, and Clemons is attempting to return for the regular season opener from knee surgery in January. Ahead of Sanford, who bounced between the practice squad and active roster in his three seasons with the Browns, in the depth are veteran Tony McDaniel and rookies Jordan Hill and Jesse Williams.

The Seahawks added another DT Monday, Dewayne Cherrington,  who  signed with New England as an undrafted free agent May 3 but was released June 10. He played in 13 games in 2012 for Mississippi State and notched 24 tackles (13 solo). To make roster room, the Seahawks cut rookie kicker Carson Wiggs.

Moffitt was drafted with the 11th pick of the third round (75th overall). He started six of eight games played in 2012 after starting the first nine games of his rookie season in 2011 before injuring a knee and was lost for the season.