QB Keith Price faltered late in the 2012 season, but that hasn’t stopped coach Steve Sarkisian from giving his three-year starter more responsibilities in a revamped offense. 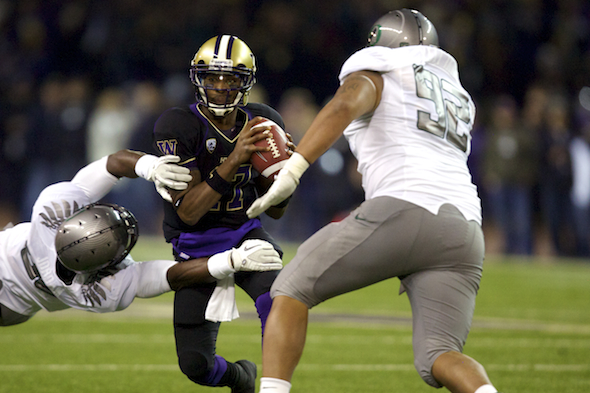 Keith Price has taken on even more responsibilities as the Huskies go up-tempo to emulate the Oregon Ducks. / Drew Sellers, Sportspress Northwest

Fans who watch the Washington Huskies when they open the gates of Husky Stadium Aug. 31 against Boise State will have a hard time dismissing the evidence. Coach Steve Sarkisian has given his offense a face lift. Extinguished are the pro-style formations he ran as an offensive coordinator at USC and later with QB Jake Locker at Montlake.

Implemented is the uptempo, spread offense made famous by Oregon. But the players who will determine the unit’s success aren’t quite ready to acknowledge the similarities to their Pac-12 North rivals, who have won the last nine games between the schools, usually by big margins.

“I don’t think it has anything to do with Oregon,” QB Keith Price said after a Tuesday practice that was closed to media.

So the Huskies decided to kickstart their offense by speeding it up. Way up.

“It has a lot to do with us playing at a high level,” Price said. “When we go fast, we noticed that over the past couple of years we are at our best when we’re not worried about the schemes, and we can play freely.”

Which is perhaps why Sarkisian said he didn’t want to change schemes in the off-season, instead opting to emphasize picking up the pace to benefit what he believes is UW’s most talented skill positions: Quarterback and wide receiver.

“From a tempo standpoint, it’s a pretty significant change from where we started to where we are today,” Sarkisian said. “One thing that I’ve tried to pride myself on for the last however many years I’ve been coaching, is playing to the personnel on your roster.

“Our fundamental principles of this offense have stayed true.”

The most integral of which are driven by Price, whose junior season paled in comparison to a sophomore campaign in which he threw for 3,063 yards and 33 touchdowns. In 2012, Price faltered down the stretch, throwing game-losing interceptions in the Apple Cup and against Boise State in the Las Vegas Bowl. He lost confidence in his dinged-up offensive line, then his own decision-making started to waver.

If Sarkisian is right, he has placed those issues behind him. But, at least one problem remains: The offensive line has to adjust to taking less rest time between snaps without boasting the type of ridiculous depth that programs like Oregon feature.

“They’re doing a helluva job,” Price said of his offensive line. “I couldn’t ask for anything else.”

Instead of deferring some of Price’s responsibilities, Sarkisian during the offseason heaped more upon the perpetually smiling senior from Compton, CA.

“Everything is based on me,” Price said. “Every play that we have, I have a read. I have a lot of control over the offense.”

“He means the world to this offense,” added Sankey.

The quick-pace attack, Price says, will force him to make faster reads before and after the snap. It’s also his job to ensure the other offensive players race to the line of scrimmage.

“It’s just making sure my energy is right every day,” he said. “I’m the one pushing the tempo. Later in camp, it gets rough. Your legs are tired. Your energy level is a little lower than what it was when you first started.

“I think the biggest challenge is making sure my energy is right so the offense can roll.”

The other hope is that pushing the tempo will help reduce the seemingly constant pass rush Price suffered last season, when he went down 37 times, a rate 44 percent worse than in 2011.

“When the defense gets tired, they start taking their foot off the pedal and stop rushing and start trying to deflect balls,” Price said. “That’s exactly what we want.”

He wouldn’t mind improving on the 19 touchdowns and 13 interceptions he threw in 2012, either. The increased number of plays the Huskies plan to run will, at the very least, give him more chances to do that. Last year, he averaged 33 attempts per game and completed 60.9 percent of his passes.

In 2011, he threw it nearly 28 times per game. His progression during his final fall camp, coupled with the UW’s new pace, might dictate him tossing more.

“He’s had his best days here the last couple of days,” Sarkisian said. “He’s really starting to peak, which is exactly where you want to be a week and a half out from your first game.”

Whether he builds on those gains and carries that improvement into the regular season will ultimately dictate whether his final year as a starter looks anything like his first.