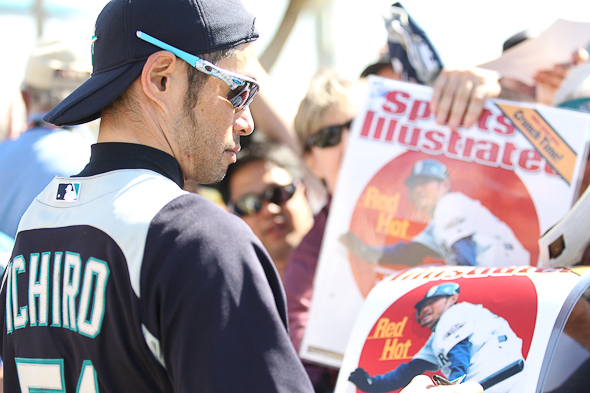 For a player who was always a student of his place in the baseball pantheon, Wednesday’s latest milestone in New York against Toronto was undoubtedly a thrill for Ichiro. He joined Ty Cobb and Pete Rose as the only players with 4,000 career hits.  The first-inning single off former Mariners teammate R.A. Dickey drew a standing ovation from the Yankee Stadium crowd and a rush of Yankees teammates onto the field for congratulations.

In his seven seasons in the Japanese Pacific League, Ichiro had 1,278 hits. During his 13 years in the U.S., 11½ in Seattle and 1½ in New York, he has 2,722 major league hits, 2,533 coming with the Mariners. Everyone understands that baseball in Japan isn’t at the same level as MLB, but that changes nothing about the admiration for his consistency and perseverance.

“After I got my first hit (in Japan in 1992 for the Orix Buffaloes), at that point, if I would’ve said to you guys my goal is to have 4,000 hits, I think everybody would’ve called me an idiot,” Ichiro told reporters via a translator in New York before the milestone. “But now after just years and years of just getting hits every day, I’ve come to this point.”

Tuesday in a day-night doubleheader, Ichiro in the first game doubled in the third and singled in the seventh.  He came up in the eighth with his first crack at 4,000. He picked up on the excitement in the park.

Ichiro grounded out, and didn’t play in the second game except to pinch-run. But he came through on his first chance Wednesday, a couple of months before he turns 40. During the game, the video board played a pre-recorded a message of congratulations from Ken Griffey Jr., his former teammate with the Mariners.

Ichiro still has a year left on his contract with the Yankees and conceivably could reach 3,000 hits in America, a milestone for which there would be no dispute. He has 420 at-bats in 118 games this season, with 116 hits and a .274 average.

“It’s not a goal that I have,” Ichiro said of catching Rose. “It’s not a number that I’m looking at. I’m just coming to the ballpark every day seeing if I’m in the lineup, keeping my schedule, so that I can perform and do what I can to contribute to this team.”

The Mariners emailed out a salute, reading, “We offer our heartiest congratulations to Ichiro Suzuki for reaching 4,000 hits today. We are proud that Ichiro’s remarkable career started in Seattle as American League MVP and Rookie of the Year in 2001.

“From Japan to the Mariners and continuing with the New York Yankees, Ichiro’s historic milestone is testament to his position as one of the greatest hitters in the game of baseball.”