The new stage at Husky Stadium is set, and an uptempo offense will be the entertainment as the Huskies host Boise State in one of the hallmark games in UW’s football history.. 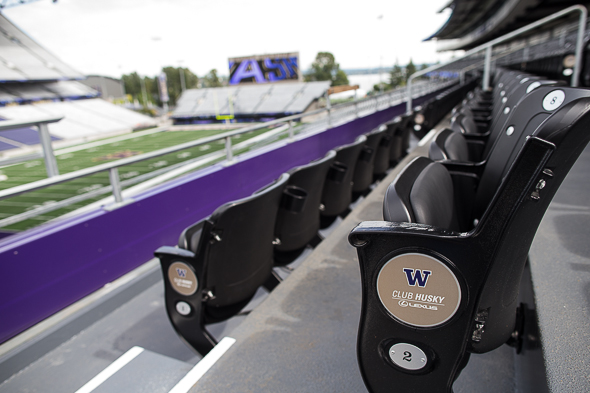 Stadium life gets a little cushier for some fans in the debut of Husky Stadium Saturday./ Drew McKenzie, Sportspress Northwest

No one has suggested yet that 39-year-old Steve Sarkisian is sitting on a hot seat, but his perch is likely to warm several degrees if Washington fails to christen a remodeled Husky Stadium with a victory over No. 19 Boise State. The Huskies ended 2012 with consecutive yard rakes to the forehead, losing the Apple Cup to Washington State and the MAACO Bowl to the Broncos. A third successive setback isn’t likely to play well on Montlake.

Sarkisian has made a number of changes designed to ensure the Huskies break their string of 7-6 records. While he has the same offensive structure in place and the same starring cast — QB Keith Price, WR Kasen Williams, RB Bishop Sankey and, eventually TE Austin Sefarian-Jenkins (suspended for the Boise State game) — as he had last year, he is expected to have the offense play at an Oregon-like tempo.

For Washington to have a successful season, it has to dramatically improve upon two numbers. Last year, the Huskies finished 97th in the nation in total offense and 88th in scoring. Sarkisian plans to increase the number of offensive snaps from an average of 69.2 in 2012 to about 82 this season. In a number of fall-camp practices, the Huskies snapped the ball in as little as 15 seconds.

Back for his third season as Washington’s starter, Price will be in charge of the hurry-up. The assumption is that he will bounce back from a disappointing junior year when he threw 19 touchdowns (vs. 33 as a sophomore) to 12 interceptions and finished with an efficiency rating of 122.0.

The Broncos largely contained Price in the MAACO Bowl (242 yards, 1 TD, 2 INTs), but couldn’t do much with Sankey, who strutted off with MVP honors after rushing 30 times for 205 yards and a TD and catching six passes for 74 yards in a 28-26UW defeat.

“He’s a physical runner — hard to tackle,” Boise State defensive coordinator Pete Kwiatkowski said this week. “He broke a lot of tackles against us last year, made guys miss. So we’ve got to do a good job of getting off blocks and getting more than one guy to the ball carrier. Relentless pursuit, running to the ball, is the key.”

“He’s fast,” Boise State defensive tackle Ricky Tjong-A-Tjoe added. “I had a couple plays that I was trying to chase him down the line of scrimmage, and he was gone because he was way too fast. I’ve got to take better angles than that.”

No. 19 Boise State is usually unbeatable when head coach Chris Petersen returns a starting quarterback — 51-2, in fact. The returnee this season is Jeff Southwick, who struggled during the first half of his first season as Boise’s starter, but closed strong without an interception in his final four games. In the Vegas Bowl, Southwick threw for 264 yards and two touchdowns.

Boise State, which has 20 former players in the NFL, is built to go 12-0 — if it can get past Washington and Brigham Young during non-conference play. The Huskies have been installed as marginal favorites, in large part because of the home-field advantage.

Question is how much more of an advantage the buzz generated by the first game in the tricked-out joint will provide. Certainly the $280 million upgrade will make the place cozier and, therefore, louder. With the playing field having been lowered by four feet and the running track removed, the atmosphere will be almost claustrophobic.

While UW officials wanted to create a more enjoyable viewing experience for fans (and succeeded), a primary reason for the stadium remodel was to make the experience of it as inhospitable as possible for the opposition.

SERIES: Dates to Sept. 8, 2007, when Washington snapped No. 22 Boise State’s 14-game winning streak with a 24-10 victory at Husky Stadium. Redshirt freshman Jake Locker threw for one touchdown and ran for another as the Huskies defeated a ranked opponent for the first time since 2003. In the most recent meeting, the Dec. 22 MAACO Bowl in Las Vegas, the Broncos pulled out a 28-26 victory. Bishop Sankey ran for 205 yards and a TD for the Huskies and Keith Price threw for 242 yards and a TD.

UW HEAD COACH: Steve Sarkisian (26-25-0) is in his fifth season. After a 5-7 record in 2009, Sarkisian guided the Huskies to a 7-6 record in 2010 that included a 19-7 victory over Nebraska in the Holiday Bowl. That marked Washington’s first postseason game since the 2002 Sun Bowl. Sarkisian coached the Huskies to subsequent 7-6 marks in 2011 and 2012, earning invitations to the Alamo (Baylor) and MAACO bowls (Boise State). Prior to joining the Huskies, Sarkisian served as a USC assistant under Pete Carroll (2001-03, 2005-08). He also worked as an Oakland Raiders assistant in 2004. Sarkisian played quarterback at Brigham Young University and later played in the Canadian Football League.

BOISE STATE NOTES: Boise State’s roster includes two Washington natives, OL Marcus Henry (Bellevue HS) and WR Kirby Moore (Prosser) . . . Head coach Chris Petersen is the winningest active coach in the Football Bowl Subdivision, boasting an 84-8 record (.913) since taking over as head coach of the Broncos in 2006. The Broncos have won 10 or more games in each of his seven years, the longest active streak in the country. Included were 12 or more wins in four consecutive years (2008-11), the only school to accomplish the feat since 1900. The Broncos have won five conference championships under Petersen — four in the Western Athletic Conference (2006, 2008-10), and one in the Mountain West (2012).