Time For Seahawks To Justify Expectations

The Seahawks had not yet fully unleashed quarterback Russell Wilson in Week 5 last year when Seattle traveled to Carolina and squeaked out a 16-12 win over the Panthers. 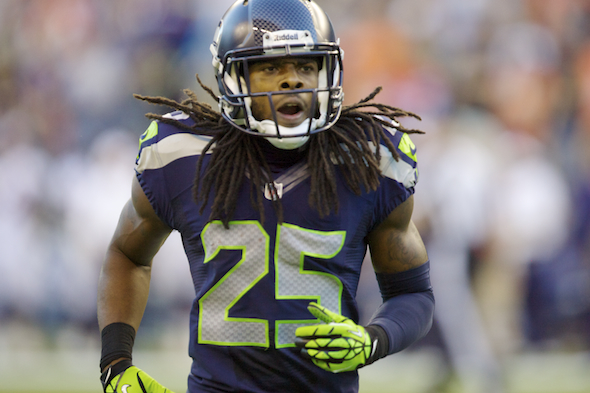 Cornerback Richard Sherman and the Seahawks begin the 2013 season with high expectations Sunday when they take on the Carolina Panthers in Charlotte. / Drew McKenzie, Sportspress Northwest

Going strictly by magazine exposure, the Seahawks are the NFL’s new “it” team. They had two players, cornerback Richard Sherman and quarterback Russell Wilson, on the cover of Sports Illustrated in a recent six-week span. The Seahawks also were the cover subject of ESPN the Magazine’s NFL preview issue and are a trendy pick by numerous pundits — see these Sports Illustrated predictions — to wind up in Super Bowl XLVIII at MetLife Stadium in New York Feb. 2.

That’s if, of course, they win the NFC West, hold serve at home and take care of business in games they will be favored to win, such as at Carolina in the regular-season opener Sunday at Bank of America Stadium. The Seahawks are 3½-point favorites, despite an 8-17 record over the past six years in Eastern zone games starting at 10 a.m.

“I guess they’re the poster boy of the NFL right now,” Panthers second-year corner Josh Norman told The Charlotte Observer this week. “They’re doing a lot of really good things. But so are we. It’s going to be a great matchup.”

Although the Panthers won three of their four preseason games and had a strong finish to 2012, winning five of their last six after a 2-8 start, there is little buzz surrounding them. Sports Illustrated picked the Panthers as the NFC’s worst team, predicting they will finish 6-10.

The Seahawks not only have absurdly high expectations, they have injuries to overcome, at least in the short term.

CB Brandon Browner is questionable with a hamstring injury and DE Cliff Avril is doubtful, also with a hamstring. DE Chris Clemons is coming off ACL surgery and won’t play for at least a couple of weeks and Bruce Irvin will sit the first four games after testing positive for a banned substance. If Browner can’t go, Walter Thurmond and Byron Maxwell will play.

Given all the hurts, Wilson’s major task Sunday will be keeping Seattle’s offense on the field, sustaining drives.

“I think Russell Wilson rejuvenated that team,” said Panthers’ radio analyst Eugene Robinson, who played 11 of his 16 NFL seasons in Seattle. “That team has always been a good, solid team. But having the quarterback that they have – he’s probably one of the most sensational quarterbacks they’ve ever had.

“I remember Dave Krieg and Jim Zorn, not to mention (Matt) Hasselbeck. But with the advent of the read option, I think Russell Wilson and his calm demeanor have probably taken that city by storm.”

Wilson outplayed Cam Newton in Seattle’s 16-12 victory in Charlotte in Week 5 last year. He completed 19 of 25 passes for 221 yards, while Newton connected on 12 of 29 for a career-low 141. The Panthers faced a fourth-and-goal at the one-yard line with less than four minutes left, but Newton bounced a pass at the feet of an open Ben Hartsock in the end zone.

The Panthers sacked Wilson twice and intercepted him twice – including a pick that Captain Munnerlyn returned 33 yards for a score on Carolina’s longest play of the game. As it turned out, that was one of Wilson’s worst performances.

“We looked at the tape of last year’s game obviously, but truthfully, it’s a different football team,” Carolina head coach Ron Rivera said of this year’s Seahawks. “When you put the tape on you see some different things, and probably one of the biggest differences you see is how much the quarterback has matured in terms of his knowledge of what they’re doing offensively and his knowledge of what opponents are trying to do against him.

“He’s really come a long way in that offense and they do a really nice job in putting him in good positions to have success.”

SERIES: Dates to Oct. 8, 2000, when the Seahawks dropped a 26-3 decision at Carolina. Steve Beuerlein threw two TDs for the Panthers and Joe Nedney kicked four field goals. The Seahawks received their only points on a 42-yard field goal from Rian Lindell. The Panthers outgained Seattle 447 yards to 209. Seahawks quarterback Brock Huard completed 19 of 34 passes for 172 yards without an interception or touchdown.

SEAHAWKS HEAD COACH: Pete Carroll (58-54 career, 25-23 Seattle) is in his fourth season. In 2010, he directed Seattle to the NFC West title, the Seahawks becoming the first team in NFL history to win a division with a losing (7-9) record. Prior to joining the Seahawks, Carroll served as head coach at Southern California, where his Trojans won seven Pac-10 titles.

SEAHAWKS QUARTERBACKS: Russell Wilson is coming off a remarkable rookie campaign he in which he threw for 3,118 yards and 26 touchdowns with 10 interceptions for a passer rating of 100.0. He earned his first Pro Bowl invitation . . . Tarvaris Jackson, Seattle’s starting quarterback two years ago, spent 2012 with Buffalo. He appeared in seven games but did not record a statistic.

PANTHERS NOTES: The Panthers went 3-1 in the preseason, defeating Chicago 24-17, Baltimore 34-27 and Pittsburgh 25-10. The Panthers lost to Philadelphia 14-9 . . . Ron Rivera is in his third season as head coach of the Panthers and has an overall record of 13-19. A University of California graduate, Rivera has also served as defensive coordinator of the Chicago Bears (2004-06) and San Diego Chargers (2008-10) . . . Former Oregon star Jonathan Stewart (born at Fort Lewis) is on the PUP list at least until Week 7.