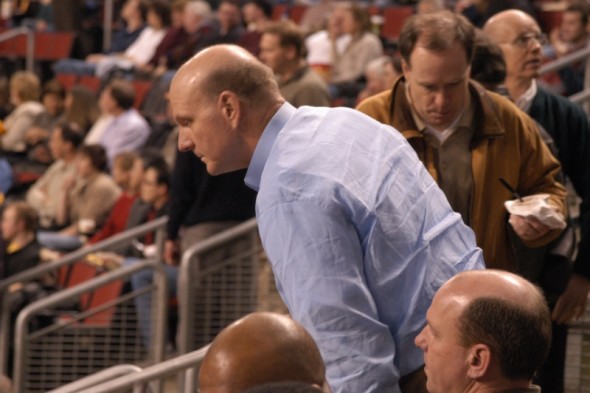 Steve Ballmer was a fixture for years at Sonics games at KeyArena. / Wiki Commons

Now that Steve Ballmer plans to be without a day job and has $15 billion in his pocket — give or take a small industrialized nation — everyone in Seattle is going to leap at the opportunity to spend his money for him. Here’s my suggestion: Buy the NBA.

Yeah, it’s a wacky idea. But from what I can tell, no one does wacky better than Ballmer, as the accompanying video attests. The video is from 2006, has had five million views on YouTube and every time I watch it, I laugh as I did the first time.

I mean, no CEO does a happy dance like that. The Dallas Mavericks’ owner, Mark Cuban, the NBA lone iconoclast, wouldn’t do that. Robin Williams wouldn’t do that. New York mayoral candidate Anthony Weiner would do that, but only in his underwear.

So Steve: You are predisposed to wackdom. And you have a passion for hoops — playing, spectating and purchasing. But you were denied the latter in May, when NBA owners voted 22-8 to keep the Kings in Sacramento and deny relocation to Seattle for you and prime partner, Chris Hansen.

You attempted to buy the Kings from the Maloof family, who were their own special kind of wacky. As it turned out, the NBA wanted to get rid of them as much as they didn’t want to move a team — even more than they wanted an extra $100 million of your money tacked on to the original purchase price. How often has that happened to you?

Well, come to think of it — twice.

If I’m keeping score correctly, you’re 0-for-2 from the field in the NBA.

In 2008, you tried to keep the Sonics from moving to Oklahoma City when you pitched in the biggest part of a $150 million private share for a plan to renovate KeyArena. But when the state Legislature refused to consider diverting some tax revenue for a $150 million public share, Clay Bennett absconded with the team, out-maneuvering all of Seattle’s business and political leadership.

In 2013, despite having the day job at the software shop, you, Hansen and the Nordstrom brothers put in considerable effort, time and money into creating an arena plan and buying and moving the Kings, only to be thwarted by an unexpected coalition of Sacramento politicians and California big-money investors to keep the Kings. The chase for a free-agent franchise by two eager markets was unprecedented in the modern history of American sports.

The Sacramento effort was abetted by Commissioner David Stern, who still bore a grudge against Seattle for dismissive treatment by state legislators during a 2006 visit. That was less than a year before he helped facilitate the sale of the Sonics from Howard Schultz to Bennett. He said in 2007 that if the Sonics were forced to leave Seattle, the NBA would never return on his watch. In May, his successful lobbying of owners assured he would keep his vow.

Atop all those obstacles was the surprising news last week that your partner Hansen apparently violated California election law by donating $100,000 to an anti-arena group in Sacramento that did not disclose as required his identity. Hansen admitted the deed, which occurred AFTER the NBA vote was lost. He said it was a “heat of battle”  mistake he regretted, even though the battle was over.

He also said he acted alone, not telling you or his advisors. Not sure that is believable, but if it is true, what else has he not disclosed to you or the electeds who have supported his plan and its controversial location in SoDo?

It’s true that in the world of big business, a campaign-contribution violation would be a petty crime. But as long as the project needs $200 million in public funding, the misdeed is a big deal to all the electeds and their staffs who supported him. And it gives ammo to critics who want to shoot down the arena’s location.

In short, the NBA under Stern, the arena opposition in Seattle, and Hansen’s dubious  judgment are all working against the return of the Sonics. All are surmountable — Stern will pack his considerable baggage and retire Feb. 1 —  but much work remains, and expansion is still an unknowable.

So, since spare time for you is nearly imminent, let’s telescope the basketball timetable. Write a check for the whole thing. Rename it the National Ballmer Association. Be the king, again.

No longer would there be stockholders and employees to complain that you were distracted. Yet the move would be in harmony with the mantra you instilled at Microsoft — if you can’t beat ’em, buy ’em.

If this seems a little too Russian-oligarch for you, there is a slower, more modest alternative: Pick up the $200 million portion of the arena project that is assigned to public funding. The electeds then would be off the hook, nobody has to wonder about Hansen, and if the location critics prevail via litigation, you can relocate the project to Bellevue.

A king would have his revenge and his castle in a kingdom that would appreciate that sort of thing.