In coach Mike Leach’s first year at Washington State, he gave almost full charge to his QBs. Drove Connor Halliday crazy. This season, he gets it — and loves it. 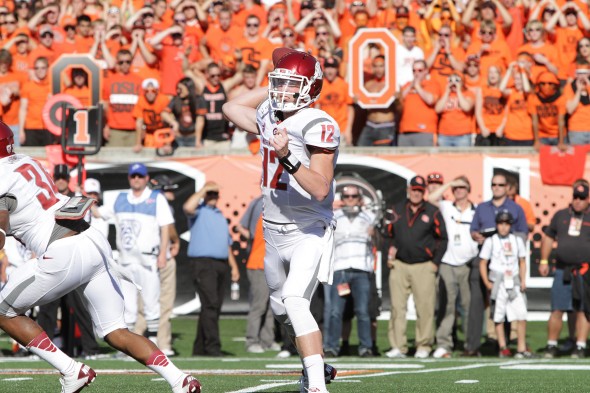 PULLMAN – Opposing defenses have spent years trying to figure out how to stop Mike Leach’s high-octane, hurry-up, pass-happy offense. In most cases, those defenses have experienced little success and considerable frustration. Connor Halliday knows the feeling, even though he plays quarterback for Leach at Washington State.

Halliday and Jeff Tuel (now starting for the NFL’s Buffalo Bills) bounced in and out of the lineup last season in Leach’s first year at WSU. Both struggled to adapt to vast differences between former offensive coordinator and quarterbacks coach Todd Sturdy and Leach, who handles Sturdy’s old duties while also serving as head coach.

“He came in last year,” Halliday recalls, “and he tells you a little bit about the offense, and that’s it. I mean, he literally did not tell us anything else about what he expected.

“That was just a lot different for me and Jeff, because Coach Sturdy (and Leach), they’re polar opposites. Sturdy gives you a game plan – 45 pages – every week of every protection, every check, every coverage, every da-da-da-da.

“So,” Halliday continued, “you go through that, and you’re like, ‘OK, I’ve got it.’ But with Leach, it’s all on your shoulders. I mean, it’s ALL on your shoulders, and I didn’t really have an understanding of that. He never tells you that.”

Leach, who does not hand out playbooks – everything’s on video and iPads – gives unusual amounts of freedom to his quarterbacks and expects them to make good decisions when most plays are designed with a number of options. Halliday says that’s “part of his brilliance,” but the redshirt junior didn’t see it that way initially.

“Even when you’re not getting it, he doesn’t come up and tell you, ‘Hey, it’s on you. It’s your deal. You’re running it,’” Halliday said.

“It’s completely on your shoulders to figure that out. That took me a little while.

“We get in games, and he doesn’t call very many plays. I’d say 70 percent of the time he gives me a formation, then just says, ‘Check.’ He’ll call the formation, and then I call the play.”

Most quarterbacks revel in having so much responsibility and freedom, and Halliday says he’s no different. Now, anyway.

“I took a huge, huge, huge step on that in the spring, and I’m rolling along pretty well with it now,” the Spokane native said.

“The great thing about it is, once you do figure it out, it makes the offense and the game and the team so much better because they (other offensive players) have someone that they’re looking at that they believe in 100 percent that’s going to get them in the right play, because they’ve seen it happen over and over and over.”

Leach has repeatedly praised Halliday for his improved decision making, leadership and overall play since last season. Halliday said he now understands why Leach entrusts most of the play-calling with the quarterback.

“He says, ‘I can give you a play, but how am I going to know if that play is going to be right?’” Halliday said. “’You’re the guy out there that sees it. I’m on the sideline.

“’I can’t see where everyone is. I can’t see the leverage of the corner(back). I can’t see who’s blitzing. You’re the guy who can see all that perfectly. Why am I going to sit here and overrule you when you have a better view of it than me?’”

Last year, Halliday completed just 52.1 percent of his passes – shockingly low for an offense that features short passes – for 1,874 yards, 15 touchdowns and 13 interceptions in nine games (five starts). The former Ferris High School gunslinger has always demonstrated a willingness to go for the long bomb, but he says “the biggest step” he’s made since last year is understanding the offense well enough to recognize when he should settle for the shorter, safer pass.

Halliday says an improved running game and offensive line will benefit him. No one in the Football Bowl Subdivision attempted more passes (624), ran the ball less (252) or allowed more quarterback sacks (57) than WSU last year.

Halliday and Leach said they want more balance in the offense, but don’t expect Leach’s Cougars to turn into a power-I team any time soon.

“He doesn’t call running plays,” Halliday points out. “If he ever calls a play, it’s a certain pass that he wants to get in.

“If it’s good leverage for it, leave it. But if not, get the heck out of it.

“He always says – I’ve heard him say probably 600 times in meetings – ‘The best runs are called by the quarterback.’ He says, ‘How am I going to guess who’s blitzing, or where the nose tackle is?’ So it’s completely on the quarterback’s shoulders to get the offense in the right play.”

Leach has yet to publicly name Halliday the starter for WSU’s Saturday opener at Auburn, but practice routines and Leach’s comments to media certainly seem to point to Halliday as the starter. He’s the only non-freshman quarterback on the roster, and he embraces the opportunity to lead the Cougars to their first bowl game and winning season since 2003.

“I just love this place,” Halliday said. “There’s been some definitely tough times, some frustration, some nights of pulling my hair out. But ever since I’ve committed here, I’ve always wanted to be the guy that starts it – the first quarterback to turn this place around.

“Maybe I’m crazy, maybe I’m delusional, but I’ve never wavered from the thought that I’m the guy that can do it.”