The March to the Match had an even more intense feel as the Sounders hosted the Timbers Sunday and drew the largest crowd in Northwest history for a soccer match. 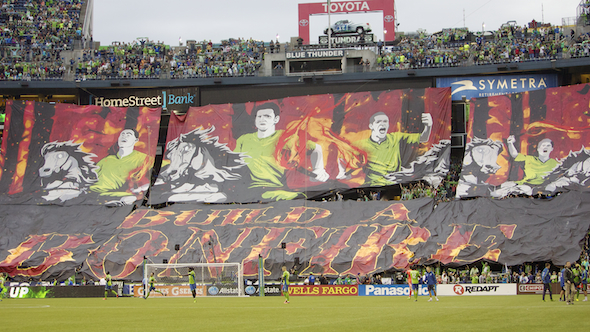 A man with dreadlocks and a menacing black bandana slowly walked along Occidental Avenue north of CenturyLink Field, head down, eyes forward. Thousands wearing rave green followed. He stopped in the middle of the street. As chants behind him strengthened, he lit two flares.

The sun, already shaded by the tight, tall buildings, disappeared as green and red smoke rose slowly in the air, spreading a bright haze. The special-edition March to the Match had begun.

The  pre-game ritual before every Seattle Sounders home match, when thousands of fans gather and walk from Occidental Park to the gates of CenturyLink Field, took on an edgy,  European feel.

“Most of these fans are diehards,” said Tim, a Bainbridge Island resident who will attend Western Washington University in the fall. “Football and baseball are dead.”

Fans of the former would disagree, but what was once a cult passion is a wildly serious expression, drawing thousands of marchers for a regular season MLS match on a Sunday evening.

The intense spectacle reflected the stakes. Not only were the Sounders playing the arch-rival Portland Timbers, they were celebrating the home debut of midfielder Clint Dempsey, the U.S. Men’s National Team captain who was signed to much international interest in the goings-on in Seattle.

The street pre-game appeared ready to erupt into the type of mayhem a European country reserves for big matches.

“F— the Timbers!” screamed one enthusiastic fan, who perhaps lacked in originality.

The Timbers were taken more seriously this time, owing to their superior position to Seattle in the Western Conference standings prior to the clubs’ second meeting of the season.  The Timbers entered third and the Sounders, seventh, though Seattle has played two fewer games. The gap closed later in the evening when the Sounders prevailed, 1-0.

“The fan base went up insanely fast,” said Gavin, a 16-year-old at Issaquah’s Liberty High School. “It just rocketed. Friends of mine who never watch MLS because it wasn’t good enough, have totally changed their opinions now just because of one guy.”

Sharing the sentiment were the 67,385 fans squished into the Clink, marking the biggest soccer crowd in Seattle history. The Emerald City Supporters fan group in the south end zone mocked a Timbers’ chant, “Build a Bonfire,”  with a massive tifo big enough to have covered the field. It went corner-to-corner in the lower bowl and above the luxury suites.

It had caricatures of four Sounders — Lamar Neagle, Osvaldo Alonso, Brad Evans and Michael Gspurning — aboard horses. Even for Sounders fans, whose devotion is unparalleled, the scene was unprecedented.

“I don’t know what it is, honestly, but there’s something in Seattle that makes us want to expand our sports-team fan base,” Gavin said.

Or is it something else?

“We’re a global kind of city,” said Devin, a 27-year-old outside of Sluggers bar who paused between puffs of a cigarette, grasping to explain why his city has embraced a sport that still remains outside the country’s mainstream conversation.

“We see the big picture,” he said.

A progressive sports fan base that doubles the attendance of the Major League Baseball franchise. Send up a flare.