Sark to writer on Huskies’ ASJ: ‘Come on, dude’

UW coach Steve Sarkisian went from chipper to chirpy during his Monday press conference when a reporter asked if TE Austin Seferian-Jenkins would play against Boise State. 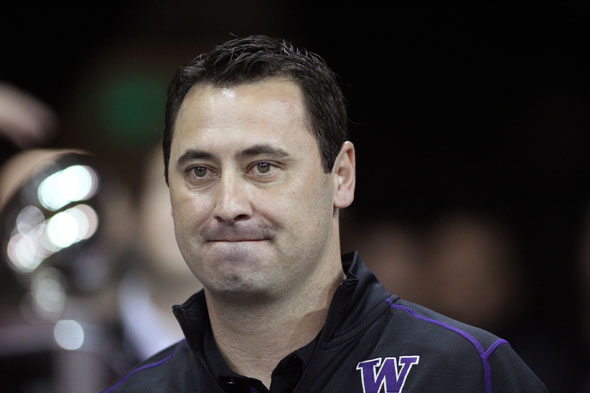 University of Washington football coach Steve Sarkisian wasn’t going to offer an update regarding whether TE Austin Seferian-Jenkins would be suspended for an off-season DUI conviction, but he did say Monday that his only preseason All-America selection still hasn’t been cleared to return after breaking his right pinky finger early in training camp.

The depth chart released over the weekend listed Seferian-Jenkins as the No. 1 tight end.

“He’s not cleared to play at all,” Sarkisian said. “This, if you guys read it properly, is a post-training camp depth chart. He was limited in this morning’s practice, so he has not been cleared to play physically as of yet, at all.”

But is there a chance Seferian-Jenkins could start, if healthy, when UW begins its regular season Saturday against No. 19 Boise State inside a freshly made-over Husky Stadium?

“Come on, dude,” Sarkisian retorted when a reporter broached the most controversial subject of the Huskies’ off-season. “Were you at my preseason press conference?”

Most were when Sarkisian said he would not say before the game whether Seferian-Jenkins, if healthy, would be suspended in the March accident, for which he pleaded guilty an served one day in jail. Sarkisian a little indignantly indicated he wasn’t going to change his plan.

However, he did speak enthusiastically about the rest of his team Monday, starting with the more relaxed demeanor exhibited by senior QB Keith Price.

“I think you guys (reporters) want to put pressure on him,” Sarkisian said. “I don’t think he necessarily puts pressure on himself. I think he is going to go out and play really good football. I think that nothing I’ve seen through spring ball or training camp appears to me as a guy who is playing under pressure.”

Though last season, pressure was all Price faced. His offensive line routinely missed blocks and the result wasn’t pretty: 37 sacks in 13 starts.

Price leaned back in a chair inside the UW Founders Club and fielded questions about the heightened scrutiny surrounding his final college campaign.

“I don’t feel any pressure,” Price said. “I expect a lot out of myself. I don’t need other people telling me I need to play better. Hopefully I can get back to that.”

He was referring to the 2011 season, in which he threw a school-record 33 touchdowns and passed for 3,063 yards. The off-season adoption of an up-tempo offense, the continued progression of RB Bishop Sankey and an offensive line that Sarkisian said he feels good about should give him a chance to top those numbers.

“It’s a tight-knit group,” Sarkisian added of a front he said can go 10-deep, but has undergone much criticism. “I feel great about what they’re going to do. I’m excited for them because as much as we try to quiet the noise around them, I’m sure they hear of,  ‘The O-line last year, the O-line last year.'”

Price acknowledged that the path back to success begins with limiting Price’s turnovers.

“Like I said, I have to protect the ball better,” Price said. “It’s been a real point of emphasis through spring ball, through fall camp — checking the ball down and trusting the guys around me. We have enough playmakers to win enough games so I just have to be smart making my decisions.”

Price, and the rest of the offense in five days will show if offseason tweaks such as the up-tempo style, attitude changes and a sold-out Husky Stadium crowd will be enough to avenge a 28-26 loss to Boise State in the 2012 Las Vegas Bowl.

The opener, scheduled by the athletic department months before they knew they would face the Broncos last post-season, creates a rare chance to play a team consecutive times. The Huskies started preparing for their second match-up with Boise State during the third week of fall camp.

“You try not to over-think things,” Sarkisian said. “You try to stay disciplined in what you do and pay attention to the details, so that you can perform at a high, high level.”

UW LB John Timu said practicing against a fast-paced offense since spring camp has put the Huskies in position to do that. The Broncos feature a number of looks on offense, and at times, won’t hesitate to go no-huddle.

“It’s much easier,” he said of defending offenses that are quick to the line. “We get to see what’s coming (in practice) so we’re ready for it.”

In less than a week, the rest of the country will find out.