The Sounders have been the hottest team in Major League Soccer since mid-July, and will try to keep it going Saturday when they meet the Crew in Columbus. 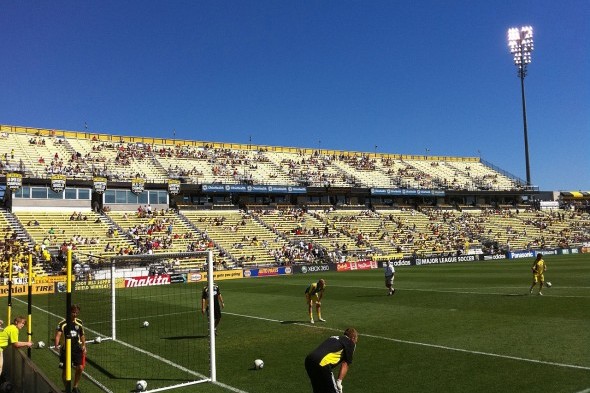 The Sounders begin their final stretch against Eastern Conference opponents Saturday when they travel to Crew Stadium. / Wiki Commons

Sunday’s 1-0 victory over the Portland Timbers, which attracted a record crowd of 67, 385 to CenturyLink Field, pushed the Sounders into the fifth and final playoff spot in the Western Conference, a good starting point for the next eight days, during which Seattle will play three matches starting with the Columbus Crew Saturday in Ohio.

Winners of four of their past five, the Sounders have at least two games in hand on every Western Conference playoff opponent. They oppose a Columbus side (8-12-5, 29 points) that has lost four of six, including a 4-0 drubbing administered by Real Salt Lake last weekend.

The Sounders have played at least two fewer games than every conference opponent, including four fewer than Real Salt Lake and three fewer than Colorado. Eight of Seattle’s 11 remaining games are against West opponents, including the final five.

Seattle has a favorable history against Columbus, having outscored the Crew 14-7 in seven matches, including 6-1 at Crew Stadium. The Sounders have scored in six of the seven meetings and held the Crew scoreless twice.

The Sounders will catch a break Saturday. Originally they would have faced two of the league’s top 10 goal scorers in Federico Higuain and Dominic Oduro. Both have nine goals, which ranks seventh in MLS, and both have started all 25 games for the Crew.

But Higuain, in his first full year with Columbus after joining the club midway through 2012, is out due to a suspension, leaving Oduro to pick up the slack.

An eight-year MLS veteran, Oduro is enjoying one of his best seasons. His nine-goal output is already his second-highest season total, after scoring 12 with the Chicago Fire in 2011.

The Sounders are 2-0-1 all-time in Columbus, where Sigi Schmid, who won an MLS Cup in 2008, previously coached.

“I always have a good feeling there,” Schmid told soundersfc.com. “I think the fans reception before the game has always been very good and very positive. Obviously when the game starts, I know they are behind the Crew and they are against us, but before the game, they are very good.”

Schmid is expected to start Eddie Johnson and Clint Dempsey at the forward spots with second-leading scorer Lamar Neagle taking a midfield role. Obafemi Martins, who sat out Sundauy,  is questionable as he nurses an ankle sprain.

“It’s an important game, but we try to approach every game with the same attitude and the same idea of trying to win,” said Schmid.