Miami Heat coach Erik Spoelstra was a surprise visitor to Seahawks headquarters, where QB Russell Wilson was dazzled by insights into how to manage big national expectations. 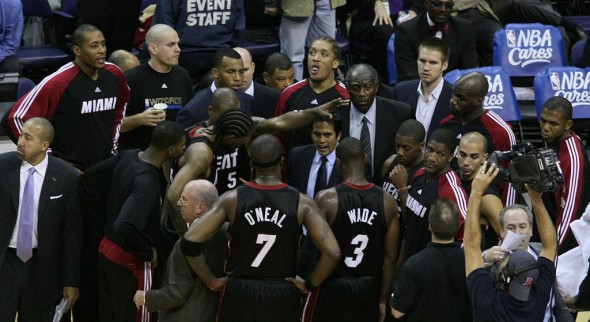 Erik Spoelstra has become used being in the middle of national sports frenzy. / Wiki Commons

There are few in any sport who better know how to cope with unprecedented preseason expectations and suffocating national media attention than Miami Heat coach Erik Spoelstra. The winner of back-to-back NBA championships Tuesday visited the VMAC in Renton, where he spoke with the Seahawks about what it takes to absorb hype, deflect criticism and make a deep playoff run.

“That sacrifice that it takes to be great, and to be great so often, is what he was talking about for the most part,” QB Russell Wilson said after the team’s morning practice.

Spoelstra’s Northwest roots trace back to childhood. He grew up in Portland,  went to Jesuit High School in Beaverton and had a successful college basketball career at University of Portland. His rise from team video manager to the man tasked with guiding LeBron James has been well-documented.

Spoelstra’s message, for perhaps the first time in Seahawks history, applies. So hyped are the Seahawks that ESPN the Magazine has already run a cover story featuring Wilson and the unique mental approach adopted by most of the team. CB Richard Sherman has a recurring (not to mention impressive) column in Monday Morning Quarterback, Peter King’s recently launched Sports Illustrated site that focuses exclusively on the NFL. At 7-1, Las Vegas oddsmakers have tabbed the Seahawks as a consensus Super Bowl pick.

“I think the biggest thing that correlates with us and the Miami Heat is the way we practice and the way we go about our business,” Wilson said. “We can’t compare ourselves to them yet. We haven’t done anything yet. They’ve done a great job of winning the whole thing. That’s what we want to learn from them.”

The idea of Pete Carroll exchanging coaching points with Spoelstra excited him, too.

“For coach Carroll and coach Spoelstra to be able to get together and share words and sift thoughts, that will be a huge advantage for us, and hopefully it’ll be an advantage for them too,” he said.

Spoelstra didn’t speak with the media afterward, but Wilson was happy to reiterate his talking points. He preached about players making concessions to go after a title, as when James, Dwayne Wade and Chris Bosh accepted contracts for less market value so they could play in Miami.

“Just working hard, continuing to believe in yourselves, and ignoring the noise. That’s the main message he gave, and it clicked with us,” Wilson said.

The second-year quarterback attended the ESPYs award show in Los Angeles earlier in the summer and spent time with James, Wade and Bosh. He asked them how they maintained their success, and came away with an answer that excluded what many consider the trio’s greatest asset: Talent.

“They basically said was that it comes down to hard work and discipline,” Wilson said. “But also the camaraderie that they had was unbelievable.”

Seattle met the NFL deadline by trimming the roster from 79 players to 75 Tuesday, though a spate of injuries allowed them to avoid releasing anybody. The final cut to 53 must be made by 1 p.m. Saturday.

WR Percy Harvin, Seattle’s top offseason acquisition who underwent hip surgery in early August, went on the physically unable to perform list (PUP). The team doesn’t expect him back until late November, at the earliest.

Joining him are DT Greg Scruggs and rookie draftee CB Tharold Simon. Scruggs will likely miss the entire regular season after undergoing surgery to repair an ACL torn in May. LB Korey Toomer, the University of Idaho graduate who impressed some early in camp, was placed on the reserve/non-football injury list.

The PUP designation requires that a player can’t return until Week 7 of the regular season.