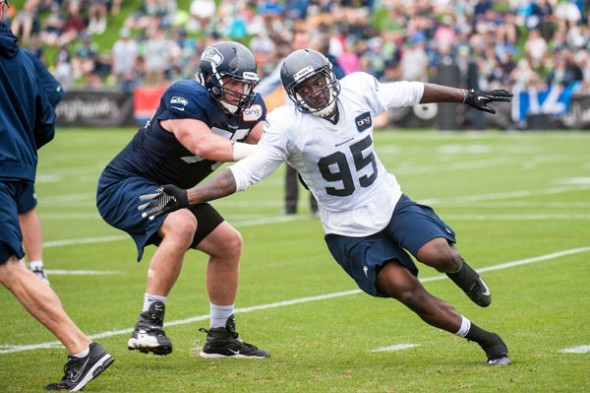 DE Benson Mayowa has taken advantage of injuries to five defensive linemen and appears to have a roster spot secured. / Seahawks.com

When the Seahawks play their final preseason game Thursday at 7 p.m. at CenturyLink Field, it will be more than a chance to make some final tweaks against the Oakland Raiders before the start of the regular season.

Seattle has 75 players on the roster. They are allowed 53 by Saturday afternoon.

The thought of setting loose 22 players weighed heavily on a tired-looking coach Pete Carroll Wednesday at the VMAC in Renton. So deep are the Seahawks that many who will be let go will end up with other teams around the NFL.

That’s nothing like what Carroll and general manager John Schneider experienced during their first season with the Seahawks. That year the pair made 284 personnel transactions.

“This is a much different day, a much different time for us,” Carroll said. “(Schneider) was wildly scouring everybody else’s roster at that time. We’re still doing that, and we’ll compete like crazy at that, but it’s not going to apply nearly as much.

“We have guys that we don’t want to cut, but we’re going to have to,” he said. “It’s a good thing. It’s just hard and emotional. We’ll treat it with great respect.”

Carroll admitted to having a soft spot for those who won’t be able to make the final roster.

He was an All-Pacific Coast Athletic Conference safety for the University of Pacific from 1971-72. He attempted to continue his career in the now-defunct World Football League, but was cut by the Honolulu Hawaiians shortly after graduating from college. For perspective: That was 40 years ago, yet Carroll recalled easily Wednesday morning the end of his brief professional playing career.

“I totally can remember every play up until I got cut in the old world league,” he said after a short Seahawks walk-through.

Which is likely why his demeanor cheered considerably when asked about players who will probably make it through final cuts. A few of them have been boosted by injuries to others who appeared entrenched in the two-deeps prior to the season.

The biggest surprise: Undrafted rookie DE Benson Mayowa. He spent the last four years at the University of Idaho, posting 67 tackles and a modest 11 sacks. The six-foot-three, 255-pound speed rusher has taken advantage of injuries to DE Cliff Avril, DT Michael Bennett and DE Chris Clemons, all of whom might not return by the regular season opener.

“I mean, damn, it’s a big difference,” Mayowa said Tuesday when asked about transitioning from the worst team in the Western Athletic Conference to perhaps the best defense in the NFL.

“Not everybody gets this chance. There’s about 1,600 NFL players, and I’m one of them right now. That’s a big opportunity.”

That makes Seattle’s final preseason game Mayowa’s most important since his Vandals beat Bowling Green 43-42 in the 2009 Humanitarian Bowl.

Former Vandals head coach Robb Akey was roaming the sidelines that day in Boise, ID, his trademark gravelly voice and brash enthusiasm on display. Reached Wednesday at his home on Pheasant Road, in Moscow, he said Mayowa was always a player that had the “bag of tools” to compete at the highest level, but he at times struggled with consistency.

At a press conference heading into his junior season, Akey proclaimed that Mayowa would lead the conference in sacks.

“He was a natural pass rusher,” Akey said. “That’s why we recruited him. That’s why we wanted to get him to our place.”

Other schools, including Oregon, were interested, too, but they didn’t offer a scholarship. He was an academic risk.

A self-proclaimed poor student in high school, Mayowa struggled to pass the NCAA Clearinghouse requirements. He gained eligibility by taking night school classes, signing his letter of intent on Aug. 7, 2009, a few weeks before the start of his freshman season. He played well the next three years. Akey said he showed a quiet leadership that impressed teammates and coaches.

But his mother, Eunice, died shortly before his senior season.

“That was very devastating to him,” Akey said.

A few months later, Akey was fired after the Vandals fell to 1-7.

Mayowa, 22, sounded this week like he was ready to put behind him the losing, the pain. He sounded ready to stick in the NFL.

“I’m developing my skills,” he said. “I didn’t have the same coaching at Idaho that I have here. I’m just taking my opportunity to get better, and learning every day.”

“Benson’s really had a great camp,” Carroll said. “He’s jumped out to a fast start so he got our attention early. He’s been consistent, too. He’ll play a lot in this ballgame. This game is really important to a number of guys, and he’s one of them.”

The Seahawks immediately started looking for another deep threat after WR Percy Harvin had surgery to repair a torn hip labrum in early August. They may have found it in WR Stephen Williams.

Acquired in January after two unproductive seasons with the Cardinals, it would be nearly impossible to cut Williams given his play in the preseason: Six catches, 186 yards and four touchdowns, including the go-ahead score in the Seahawks’ 17-10 win Friday night against the Packers at Lambeau Field.

“He’s worked against really, really good football players, been able to battle and be successful to make us want to throw the football to him,” Carroll said.

Often during the preseason, withholding players from practices and games is a way to preserve linemen who experience the wear-and-tear of a 16-game NFL season.

For the defensive line, the hold-backs are largely involuntary. DT Jordan Hill won’t play against Oakland because of a bicep injury. Carroll has listed him as week-to-week. Meanwhile, DT Tony McDaniel and DT Brandon Mebane will sit out as well, though they could be back for the regular season opener.

Carroll said Bennett is taking “care of some business” out of the area and won’t be back until the end of the week, at the earliest. Chris Clemons has yet to fully participate in practice, though Carroll said he again looked healthy during his Wednesday morning workout. Avril, meanwhile, continues to work his way back from a hamstring injury.

Zach Miller has yet to appear in a preseason game, but Carroll has been encouraged during camp with how the Pro Bowler progressed while recovering from a foot injury.

Said Carroll, “He looked great, and there’s no reason not to (play him). He’s full go. He’s practiced great, and he’s really tuned into it, too, so it’s the right thing to do.”

FB Michael Robinson, meanwhile, was at the VMAC Wednesday but didn’t participate in practice, nor will he until team doctors figure out why he is sick.

“There’s some intricacies with his illness so he’s going to miss some time here before we get him back out,” Carroll said. “Hopefully, he’ll be ready in a couple of weeks. He had a virus that hit him pretty hard.”

Those annoying bag checks and full metal detector wave-downs starting to wear on the nerves yet?

Well, they won’t be ending anytime in the foreseeable future. Combined with a 7 p.m. weeknight start that bumps into Seattle’s downtown rush hour, the Seahawks are encouraging fans to arrive early to the Thursday night game. Gates open at 5 p.m.