Cougars get big cash for opening on SEC turf

Why go into the humid heart of SEC country in August to begin a football season? Well, $1.15 million will help take the sting out of any whuppin’ Washington State might suffer. 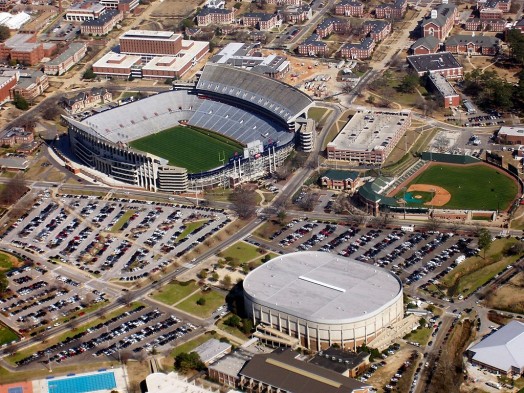 The Cougars will be well compensated for their venture into the SEC heartland at Auburn’s Jordan-Hare Stadium. / Wiki Commons

AUBURN, Ala. – The Washington State Cougars, masters of self-inflicted mayhem, have dared to tread their way into Southeastern Conference country for a challenging season opener Saturday night at Auburn.

Everyone knows about SEC football. You know: The Supremely Egotistical Conference.

If you listen to Southeastern Conference fans – and it is difficult not to, what with them constantly screaming in your ear when they’re not inhaling vast amounts of beer and barbecue – the SEC invented college football, improved it immensely and now awaits the NFL’s inevitable decision to add all 14 SEC teams as expansion franchises.

Oh, do they love their pigskin down south. In April, more than 83,000 turned out at Jordan-Hare Stadium to watch Auburn’s spring SCRIMMAGE. At 4 p.m. Saturday, the Tigers, a 15½-point favorite, hope to boost the crowd count by another thousand or two for a real game with a real opponent during a real season (ESPNU TV).

Auburn is giving the Cougars $1.15 million crisp, green reasons to open the season 2,000 miles from home in the stifling humidity of east-central Alabama. Come nightfall, the Cougars may have approximately 1.15 million reasons to regret their decision.

Or not. Auburn is identical to Washington State in that its roster is filled with most of the culprits responsible for a 3-9 season a year ago. Improvement is expected by both teams, but no one is predicting conference title runs or Top 25 glory for either side.

The 2013 Tigers, like the 2012 Cougars, have installed a new offense and defense under a new coaching staff. A certain amount of calamity is to be expected in such circumstances, particularly when Auburn’s quarterback is a junior college transfer who played cornerback at Georgia two years ago before reportedly opting to do a quarterback sneak out of the locker room with teammates’ money.

One year after toying with Kansas juco rivals, Nick Marshall is being asked to operate an incredibly fast-moving, no-huddle offense in front of  a national television audience. We must presume the stakes were not quite this high for Marshall in lovely Garden City, KN.

Marshall, a certified legend as a high school quarterback in Georgia, passed for 3,142 yards and 18 touchdowns and ran for 1,095 yards and 19 more touchdowns at Garden City. He also threw 20 interceptions and lost five fumbles.

Recent WSU defenses have made All-Americas out of future shoe salesmen, but the blitz-happy Cougars figure to give Marshall a multitude of looks he has never seen before. It is difficult to believe, in his first game out of the chute, that Marshall can be any more imposing than the endless dual-threat quarterbacks the Oregon Ducks have employed while carving up the Cougs.

For all the flash and dash of the skill-position superstars in the Southeastern Conference, the core of the SEC’s greatness has been dominance in the trenches. Washington State is young and/or experienced at many positions – including the defensive front seven.

WSU’s defense might not be ready to handle a run-oriented attack that hopes to confuse and wear down the Cougars with a pounding run game and play-action passes ordered up at a head-spinning pace. On offense, the Cougars are guilty until proven innocent after leading the nation in quarterback sacks allowed and finishing last in rushing in 2012.

If WSU’s offensive line holds serve, Leach’s pass-til-you-drop offense should be a considerable challenge for Auburn’s unusual 4-2-5 defense. The Tigers are missing three valuable defenders due to injury or suspension.

Washington State quarterback Connor Halliday throws to a bevy of talented receivers, and the rifle-armed Halliday says he has learned to take advantage of the many short, safe passes featured in Leach’s offense. No Cougars made ESPN.com’s list of the top 25 players in the Pac-12 Conference, but no Tigers made the coaches’ preseason All-SEC first team (the Pac-12 offers no such animal).

New Auburn coach Gene Malzahn, the offensive coordinator for the Tigers’ national championship team in 2010, says the Cougars should be a “much-improved team.” Halliday doesn’t plan to disappoint Malzahn.

“The biggest thing for us is to remember everything we’ve done,” said Halladay, a redshirt junior out of Spokane prep power Ferris. “All the brutal, bullcrap workouts — the two-day off-season we had (between the Apple Cup win over Washington and the first winter workout) and all that – and look each other in the eyes when something goes wrong.

“Say they return the opening kickoff (a long way). They intercept my opening pass and take it for a touchdown. They throw an 80-yard bomb the first play.

“We need to be able to look at each other’s eyes and just kind of nod our heads and say, ‘Let’s go.’ To know that no matter what happens, we’re just as good as them.”