Not the same old USC; what about Cougars?

Due to conference expansion and scheduling quirks, Washington State has not faced USC since 2010. The Cougars will be out to snap an eight-game losing streak to Troy. 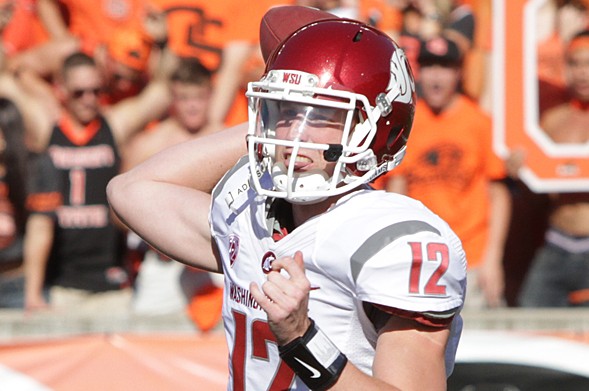 Washington State enters Saturday night’s match-up at USC a heavy underdog, though players aren’t acting like it. That some are giving the Cougars a chance to upset a nationally-ranked Trojans team is a historic happening in itself. The Cougars last defeated the Trojans in Los Angeles in 2000.

The Cougars out-played Auburn last week during much of their 31-24 road loss, but three interceptions from Connor Halliday and a pair of lapses — one on special teams, and another on defense — ultimately derailed their shot at an unexpected win.

Despite WSU’s dreary history against the Trojans, there are reasons to think they can compete well this weekend.

These aren’t the typical, dominant USC Trojans. Head coach Lane Kiffin still has much to prove and has been indecisive choosing a quarterback. Cody Kessler started in USC’s ugly 30-13 win last week against Hawaii, but played nervously, finishing 10 of 19 for 95 yards, one touchdown and one interception.

Kiffin chose to play musical chairs, inserting Max Wittek, who played unimpressively. He went five of 10 for 77 yards but didn’t throw a touchdown or a pick.

Kiffin said Sunday he has chosen a starter but refused to tell reporters, citing his desire to keep both away from media scrutiny. A source earlier this week told the Los Angeles Times that USC would use the same strategy it did against Hawaii, starting Kessler but replacing him if he struggles.

Even with their depth thinned by NCAA sanctions from the Pete Carroll era, the Trojans are nonetheless ultra-talented. WR Marqise Lee posted video-game numbers in 2012, finishing with 118 receptions, 1,721 yards and 14 TDs. Last week against Hawaii, he caught eight passes for 104 yards. Lee presents an dilemma for a WSU team that may be without S Anthony Carpenter and CB Nolan Washington.

Also concerning for WSU is the return of USC DE Morgan Breslin (13 sacks in 2012), who missed the season opener against the Warriors with what most thought was a lower leg injury (USC doesn’t comment on injuries). That didn’t keep the Trojans from sacking Hawaii’s quarterback seven times.

The Cougars, who last week tempered Auburn’s pass rush in allowing two sacks, will have to limit Breslin’s impact because QB Connor Halliday has been ineffective when forced to throw on the run.

WSU HEAD COACH: Mike Leach (87-53 overall, 3-10 WSU): Hired Nov. 30, 2011 to replace Paul Wulff, who went 9-40 in four seasons, Leach’s 2012 Cougars led the Pac-12 in passing at 330.4 yards per game and finished the season by beating Washington in the Apple Cup. In 10 seasons at Texas Tech (2000-09), Leach earned 10 bowl bids. The Susanville, CA., native, who was raised in Cody, WY., recorded a school-record 84 victories. Leach’s offenses led the nation in passing six times and three times accumulated the most total yards. In 2009, the Red Raiders finished second in passing offense and fourth in total offense, both marks tops among BCS conference schools. Prior to Texas Tech, Leach spent one season as the offensive coordinator at Oklahoma (1999). That year, the Sooners set six Big 12 and 17 school records.