Sounders Face A Test Of Fire At The Clink

The Sounders, who got off to the worst start in franchise history this season, have won six of their past seven matches and jumped into second place in the Western Conference. 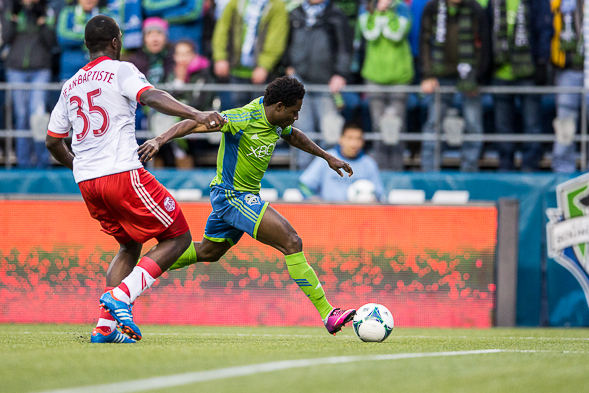 Despite missing Obafemi Martins and Brad Evans (injuries), Clint Dempsey and Eddie Johnson (international duty) and Leo Gonzalez (suspension), the Sounders received solid showings from the balance of their roster Wednesday in defeating Chivas USA 1-0. Seattle is now unbeaten at home in 11 consecutive matches (8-0-3), a run that started after a surprising opening-day 1-0 loss to the Montreal Impact.

With three straight 1-0 wins, and having jumped from next-to-last in the Western Conference into a tie for second, the Sounders are finally starting to look like a team that can contend for an MLS Cup title.

Dempsey and Johnson, still on international duty with the U.S. National Team, which lost 3-1 Friday night to Costa Rica, won’t play against the Chicago Fire Saturday, but Gonzalez is eligible to return. Evans is not listed among Seattle’s probable starters and Martins is still questionable with an ankle injury. The Sounders listed Martins as probable for the Chivas match, but held him out when he failed a pre-game fitness test.

“He’s frustrated because he’s hurt and he can’t get on the field,” said Sounders head coach Sigi Schmid. “So, I’m OK with that. We’ll see how he is Saturday. It’s going to be a game-time decision.”

“David Estrada hadn’t played in a long time and I thought he stepped up with a really good effort. His first 60 minutes, and just his activity, was really good,” said Schmid.

Sounders are 4-0-3 all-time against the Fire, including 2-0-1 at CenturyLink Field. The Sounders are 7-1-3 at home this season while Chicago is 2-6-3 on the road. The Sounders have six wins in their past seven and will enter the game with 286 consecutive shutout minutes, seventh-longest streak in MLS this season.

“We made a commitment after the Houston game (Aug. 17) that we’ve got to play better defense, and we haven’t given up a goal since then. At the end of the day, that’s something very important,” said Schmid. “To win an MLS Cup, we got to be solid in the back.”

Chicago saw its three-game home winning streak come to an end Sunday, but came away with a 1-1 draw with the Houston Dynamo.

“They’re a team that is in desperate need for points,” Schmid said. “They want to stay in the hunt in the East. So for them, it’s a very important game. I think Chicago is a team that’s going to play pretty tight to the vest in terms of opening themselves up defensively. You have to be sharp and alert and be prepared for a lot of place-changing among players.”

Strong defense has been key to Seattle’s success in the series. The Sounders have posted three shutouts in seven all-time meetings.

The Fire will be without midfielder Joel Lindpere (Estonia) and Arevalo Rios (Uruguay), who are with their respective nations for World Cup qualifying.

This will be the only match between the Sounders and Fire this season.

SERIES: Dates to May 2, 2009, when Seattle and Chicago played to a 1-1 draw. Tyrone Marshall scored the Sounders’ goal. The Sounders have a 5-0-3 record against Chicago in all competitions. The teams last met April 28, 2012, Seattle recording a 2-1 victory on goals by David Estrada and Eddie Johnson, his first as a member of the Sounders.

COMING UP: Sounders play Real Salt Lake at CenturyLink Sept. 13 and the LA Galaxy in a road match Sept. 21.