Thiel: Safety-first NFL games: Get used to it

The NFL’s settlement with former players addressed the past. The present and future belong to scientists like Harboview’s Dr. Richard Ellenbogen, who wants data to rule, not passions. 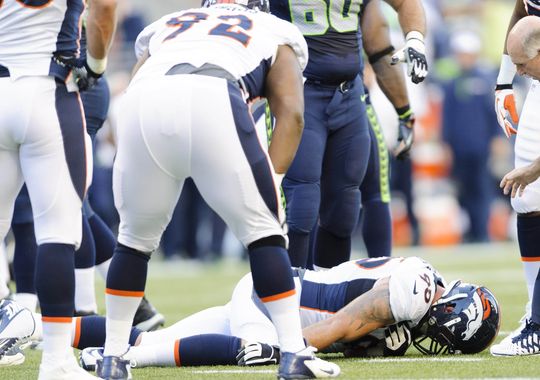 Denver Broncos defensive end Derek Wolfe had to be taken from CenturyLink Field by ambulance after a hit in the Aug. 17 game against the Seahawks. He has recovered and will start Thursday. / Denverchannel.com.

A favorite father-son bonding experience back in the day was when the little one was allowed to slide into dad’s lap while driving, so he could put his hands on the wheel and pretend to drive.

“We miss the intimacy with dad,” said Dr. Richard Ellenbogen. “But today, it sounds crazy. We’d never drive today without strapping in a child.”

Which is Ellenbogen’s way of saying to NFL players, commentators and fans grousing about the changes in the NFL inspired by player safety: Get over your damn selves.

Since Ellenbogen, chief of neurosurgery at Harborview Medical Center and a University of Washington professor, became co-chair in 2010 of the NFL’s head, neck and spine committee, the NFL has had a 40 percent drop in concussion frequency, he said. A large portion of that has come from rules changes designed to reduce collisions that cause concussions.

Changes continued into the season that starts Thursday night. This time, it’s the offensive player who will be penalized for dropping the helmet to strike a tackler.

Complaints from players, media critics and fans about altering the game’s violent — and lucrative — nature still pickle the football conversation. But the $765 million settlement last week of a lawsuit from more than 4,200 former players made the point that the NFL no longer thinks the players were making up stuff.

Yes, the league spent money to save money; yes, they wouldn’t have done it with the players filing suit in 2011; yes, the league avoided legal liability, and yes, two documentary movies about traumatic brain injury (TBI) are coming out over the next month with the NFL as villain.

Whatever the motivations to settle, a watershed moment took place in the evolution of pro football. But the settlement was about the past. It is not about present players or future players. They are not parties to the litigation. They are parties to a different game.

The present and the future are up to Ellenbogen and his peers around the country on the committee. By their request, the doctors are unpaid by the league, which knows it has to distance itself from past practices and, for a change, listen to science instead of scoff at it like a bunch of climate-change deniers.

“We analyze every concussion, and plays that cause concussions,” Ellenbogen said by phone from his office last week. “We ask, ‘How do we lessen the chances for concussion, and how do we treat the player when it happens?’

“The results have been amazing.”

Their analysis is forwarded to the NFL’s competition committee, which then makes the policy regarding rules changes.

As an example of science provoking change, Ellenbogen said data was analyzed from every concussion in the NFL the past two years. The study disclosed that a surprisingly high 28 percent were created not from the defenders hitting the heads of ballcarriers, but ballcarriers initiating contact with defenders by lowering their helmets prior to impact.

Not anymore, unless the teams have yardage and the players have cash to spare. Now the offensive player also is responsible for averting helmet-to-helmet impacts.

Increased protection has had significant impact on how the game is played and how it is taught.

“We are totally on a different wave length, in terms of how we talk about the game,” Seahawks coach Pete Carroll said Wednesday. “Our guys are all working hard to adapt, I think we’re doing a great job of it.”

He cited a play in the final exhibition game Thursday against Oakland when Seattle running back Christine Michael appeared to be called for illegal contact with his helmet against a Raiders defender in the open field. But after referees gathered to discuss the call, the flag was picked up because Michael attempted to avoid the blow.

“He had done it exactly right,” Carroll said. “He had glanced his helmet to the side. They made the right call in adjusting. That teaches these guys that there are ways to play really tough, hard-nosed football and still abide by the rules. I think we’ll continue to talk about it throughout the season.”

A more subtle change was at hand in the Aug. 17 game against Denver. Nine minutes into the game, Denver defensive end Derek Wolfe took a hit from Seahawks rookie tight end Luke Willson and dropped motionless to the turf.

He lay prone for several minutes before he was strapped to a backboard and taken from the field by ambulance to Harborview. The decision was made not by trainers or even team doctors but by an independent neurosurgeon assigned to the the Broncos sideline. Another neurosurgeon was assigned to the Seahawks sideline.

The presence of unaffiliated medical experts was an NFL first this preseason, one long sought by players who came to distrust diagnoses of medical personnel paid by the clubs.

“We’ve arranged this program in all 32 NFL cities,” Ellenbogen said. “It’s an agreement between the commissioner’s office and the players to make neurosurgeons available to assist at every game. Every team has an emergency action plan that coordinates with a local hospital.”

The good news is that Wolfe is fine, and likely to start in the opener at 5:30 p.m. Thursday  (KING 5 TV) against the defending champion Baltimore Ravens.

“Until I got all the feeling back, I was pretty scared,” Wolfe told the Denver Post after the Broncos’ practice Tuesday. “Once all the feeling came back, it was kind of like, ‘OK, nothing’s broken.’ ”

“It could have been a lot different. Luckily, things weren’t too serious . . . They did a great job of taking care of me.”

The change was long overdue. The ignorance/neglect/deceit in the NFL’s previous conduct with TBI is laid out it two documentaries: “United States of Football,” written and directed by Redmond independent filmmaker Sean Pamphilon, out this week nationally, and “League of Denial,” a two-parter airing Oct. 8 on PBS on its “Frontline” news program. It was co-developed by ESPN — or at least it was, until the NFL pressured its broadcast partner to pull its association with the program, a story that turned into a national embarrassment for both companies.

But after the settlement — Ellenbogen said he was given a courtesy heads-up by the league an hour before the news broke, and was otherwise as surprised as everyone else — addressed past misdeeds, some talk has turned to the future.

“It’s our managing the adaptation that is so important,” Carroll said. “We have to work at it regularly, because there are so many things that aren’t allowed now that are almost natural to the game. So our guys have to learn how to respond to situations differently.

“I will not complain about any of this because there’s no reason to. It’s the facts; it’s the life that we are living. So we just have to adjust.”

The same adjustment needs to occur among some current players and fans, who grow frustrated with new rules that are diminishing the splatterings that so thrilled many and were taught as a fundamental. Football remains a violent game, but it is less reckless because we now know better.

For those who contend that a football player knows the risks of his job just as does a fireman, you miss the point: Even firemen have rules and protocols for safety that tell them when to back off. Until now, no one has told football players to back off.