Washington State’s flag tradition — it shows up in the background wherever ESPN College Day appears on a campus — has more consistency than any Cougars football team. 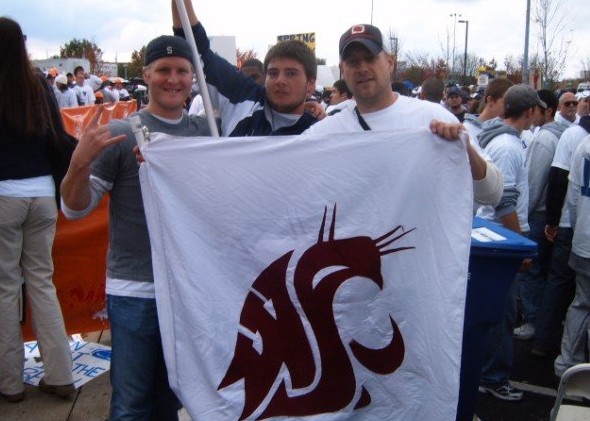 The flying of the Cougars flag on ESPN’s Gameday show reached Penn State in 2007. / Wiki Commons

PULLMAN — Earlier this week, a box arrived in Michigan. Inside lay something that has crisscrossed the country, appearing without fail on national television during football Saturdays for years: A large Washington State University flag. Saturday marks the flag’s 134th consecutive appearance on ESPN College Gameday, the pregame football morning talk show hosted by Chris Fowler, Kirk Herbstreit and Lee Corso.

During that journey, the flag has taken on a life of its own, said Cameron McCoy, a 1998 WSU grad who tracks down alumni wherever the next show is held. Now a doctoral student at the University of Oklahoma, McCoy ensures the flag follows ESPN cameras across the country.

Any WSU alum or fan in the area can participate. McCoy said there are at least two flag wavers at every appearance — one holds a crimson flag with the famous Cougars insignia, the other a gray.

“There were 15 people at Clemson,” he said of the flag’s South Carolina appearance last weekend. Six people signed up in Ann Arbor, MI. More are expected to join, McCoy said.

The organization is funded by donations that cover shipping costs and other expenses that average around $1,500 annually, McCoy said. The flag has its own manual, which instructs “flag leaders” how to maximize airtime on ESPN by choosing the best locations to position it during broadcasts. As soon as the location of the next College Gameday is announced, the search for alumni begins and the flag is shipped to the leader once one has been appointed.

The flag and poles are sent via FedEx at the expense of the Ol’ Crimson Booster Club. Last week, the flag appeared during the broadcast of Clemso’s top-10 game against Georgia. Three students, who drove 5,000 miles round-trip for WSU’s game at Auburn University, dropped off the flag with WSU alumni at Clemson.

Kevin Massimino, vice president of Associated Students of Washington State University, and two other students stopped in 10 major cities on the drive from Pullman to Clemson, meeting with local alumni and raising money for the project. The stops included pictures with Ol’ Crimson, handouts of Cougars football posters and a 3-foot-by-5-foot flag to be signed by the alumni that will be displayed on the Pullman campus.

The students will present the money at the WSU homecoming game Sept. 21.

The tradition started Oct. 18, 2003, when WSU alum Tom Pounds (’81) drove 600 miles from Albuquerque, NM., to Austin, TX., and waved the flag. The hope then was to bring for the first time the College Gameday Crew to Pullman as the Cougars fought for a Rose Bowl berth.

In the decade since, the Cougars went from mediocre to abysmal to interesting. Though there were a few close calls – the Gameday Crew nearly came for an early season game against Stanford — the show never made the trek to Pullman.

The Ol’ Crimson Booster Club is willing to work with people if they have new ideas for the flag, much like how Massimino brought the idea of a road trip to the club back in January, McCoy said. The Ol’ Crimson Booster Club relies on ESPN College Gameday to carry on the tradition but the movement is spreading to different audiences such as appearances at soccer games and tennis matches, he said.