In 140 games as a head coach, Washington State’s Mike Leach has never won a game scoring 10 points. It was one of many astonishments in Los Angeles Saturday night. 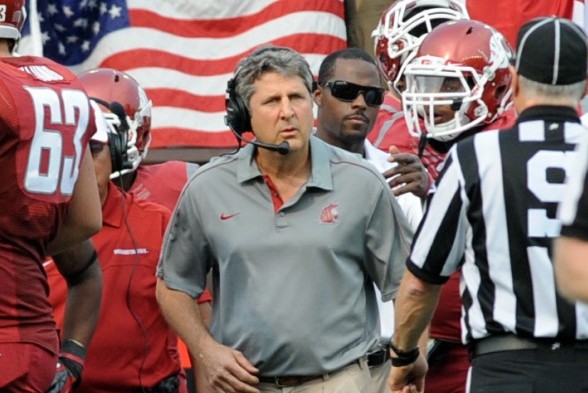 LOS ANGELES – Mike Leach came to Washington State to go to bowl games and win conference championships and take up residence in the Top 25.

Two games into his second season in Pullman, no one knows for certain if Leach will reach his goals. On Saturday night, however, Leach and his players provided WSU fans with hope, an entity that has been in short supply on the Palouse for the past decade.

Washington State’s 10-7 victory over No. 25 USC earned few style points. Then again, style points aren’t the points that go up on scoreboards like the one several Cougars posed in front of for a group photograph after the rarest of wins at Los Angeles Memorial Coliseum.

“Hell,” one longtime WSU follower informed a companion after the game, “has frozen over.”

WSU hired Leach largely due to his flashy, pass-happy offense. On Saturday, however, the Cougars sputtered on offense, only to see the defense limit USC to 54 passing yards (the longest completion covered a mere eight yards) and 193 total yards.

“The defense won the game for us,” Eklund said.

Nah, USC fans insist, our offense lost the game for us. The crowd of 77,823 sat in silence most of the game except when booing the bland, ground-oriented play calling of head coach Lane Kiffin.

“As boring as it was, that was the plan,” Kiffin said.

No wonder Kiffin was booed off the field – never was the standard police escort for a coach more welcome and quite possibly necessary – shortly after thousands of fans serenaded the coach with chants of “Fi-re Kif=fin!”

Cody Kessler, one of two limp-armed quarterbacks whom Kiffin has employed in each of the first two games, said he understands all the booing.

Sorry, kid, but that’s not good enough anymore. NCAA sanctions for various shaky doings have cost the Trojans scholarships and, therefore, depth and talent. Leach insisted on calling the Trojans “a great team,” but that comes as news to anyone who witnessed Saturday’s game.

“We expected to come in here and win,” WSU cornerback Daquawn Brown said.

Brown, whose penchant for talking big and making big plays (as well as the occasional big mistake) has endeared himself to many Cougars, is a true freshman who absolutely loves a) winning and b) himself. PROBABLY in that order.

Injuries forced Brown to make his first start Saturday, “about five minutes” from his family home. He responded by leading everyone on the field with 11 tackles, and no one was less surprised by this development than Brown.

Brown did his part to limit All-American wide receiver Marqise Lee to 27 yards on seven receptions.

“We just covered him hard all day,” Leach said.

Horton was the main man in charge of covering Lee. Horton responded with a 70-yard interception return for a touchdown and a second pick late in the game shortly after Andrew Furney snapped a 7-7 tie with a 41-yard field goal.

Furney’s field goal was set up by a 50-yard screen pass to Dominique Williams, who seemed headed nowhere until he put on a few dance moves to escape defenders near the line of scrimmage. That eased the sting of a second straight three-turnover game for quarterback Connor Halliday.

“I just want to congratulate the other 10 guys on offense,” Halliday said. “If this was a couple years ago, we would have went in the tank with not being able to move the ball.”

One week after he threw the ball 65 times and had three interceptions in a seven-point loss at  Auburn, Halliday had two more picks and a lost fumble. He completed 26 of 38 passes for 215 yards – the Cougars added just 7 yards on the ground — but a second straight game with an end-zone interception is cause for concern.

“Halliday had some problems,” Leach said. “He got hit hard a bunch of times. Turned it over twice (on interceptions alone), but he showed a lot of composure and leadership on the sideline and out there on the field.”

“It’s such a team win,” Halliday said. “Last week against Auburn, we played real well, but it was in spurts.

“For the defense to play the way they did tonight was absolutely amazing.”

No doubt plenty of football fans around the country will be absolutely amazed when they wake up Sunday morning and discover that Washington State won late Saturday night at USC (1-1). Those same fans figure to be even more amazed in two weeks, because the Cougars – who haven’t posted a winning record or gone to a bowl game since 2003 – should be 3-1 after home games with lightweights Southern Utah and Idaho.

Are the Cougars for real? It’s too early to tell. It is obvious, however, that they are bigger, faster, stronger and better than in recent years. They play hard, and they play like they expect to win.

“We built this belief,” Pole said, “that we can step out onto the field and play with anybody in the country.”