In Chicago, Huskies are 10-point road favorites over 2-0 Illinois, a school Washington hasn’t faced since Sonny Sixkiller quarterbacked the 1972 team. 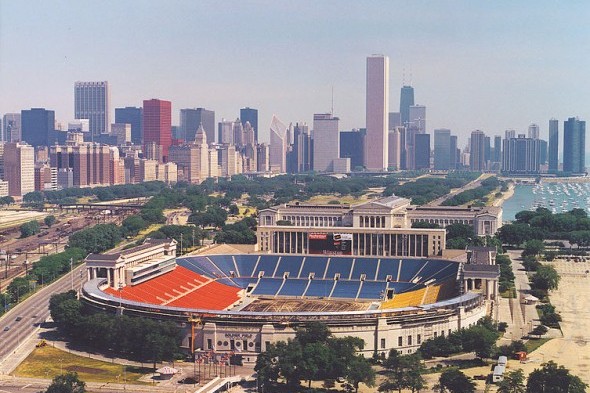 The Huskies will play Illinois at Soldier Field in Chicago Saturday in the first meeting between the schools since 1972. / Wiki Commons

In the past decade, Washington has spent a paltry four weeks ranked by The Associated Press. Each of the three ranked teams before the current one, all coached by Steve Sarkisian, exited the polls via a rout, most recently last season when the No. 23 Huskies suffered their annual beating at the hands of Oregon.

This Sarkisian team, No. 19 in The Associated Press poll and 23 in the USA/Coaches tally, might finally have some staying power. Washington is a 10-point choice to beat 2-0 Illinois Saturday at Soldier Field in Chicago and then draws Idaho and Arizona at Husky Stadium before tackling the toughest part of the schedule, back-to-back dates with No. 5 Stanford and No. 9 Oregon.

After rolling up 38 points and 592 yards of total offense against Boise State, the Huskies should have one of their most formidable weapons back in the lineup. All-America tight end Austin Seferian-Jenkins sat out the Boise State game due to suspension but will be ready to play Saturday.

“All we’re thinking about now is getting better every day. That’s a thing in the past now, and we’re looking forward to (Saturday) and winning as many games as possible this season.”

In addition to the suspension, Seferian-Jenkins suffered a broken right pinkie during fall camp that required the insertion of a pin. He described the injury this week as “an afterthought.”

The major test for Washington will be slowing Illinois quarterback Nathan Scheelhasse, a pass-happy sort who likes to get the ball out in 2.2 seconds or less.

A four-year starter, Scheelhaase has thrived in new offensive coordinator Bill Cubit’s system. He leads the Big Ten and ranks in the top 10 in the nation in total offense (362.5 ypg) and passing yards per game (364.0). Scheelhaase has more touchdown passes (six) in two games than 102 of the 123 FBS teams. He also has thrown for 728 yards, more than 116 of 123 FBS teams.

Scheelhaase’s 728 yards are the most in Illinois’ first two games of a season since Jason Verduzco passed for 783 yards in the first two of 1991.

Scheelhaase likes to spread the ball around. So far, 12 Illini have caught passes and nine have carried the ball. Scheelhaase connected with 11 receivers against Cincinnati.

The Huskies will be trying to open a season 2-0 for the first time 2011, when they beat Eastern Washington and Hawaii. UW hasn’t opened 3-0 since 2001.

SERIES: Dates to Oct. 21, 1950, when the Huskies dropped a 20-13 decision at Champaign, IL. Don Heinrich threw two touchdowns, one to Bill Early, the other to Hugh McElhenny. Illinois won the first three meetings between the schools, Washington the next three. UW has won the last two, including 31-11 Sept. 30, 1972. In that game, UW scored on a 57-yard punt return by Calvin Jones, a 16-yard pass from Sonny Sixkiller to John Brady, one-yard runs by Larry Dumas and Jim Eicher, and a 31-yard field goal by Steve Wiezbowski. Washington and Illinois played in the 1964 Rose Bowl, the Illini winning 17-7.

UW HEAD COACH: Steve Sarkisian (27-25-0) is in his fifth season. After a 5-7 record in 2009, Sarkisian guided the Huskies to a 7-6 record in 2010 that included a 19-7 victory over Nebraska in the Holiday Bowl. That marked Washington’s first postseason game since the 2002 Sun Bowl. Sarkisian coached the Huskies to subsequent 7-6 marks in 2011 and 2012, earning invitations to the Alamo (Baylor) and MAACO bowls (Boise State). Prior to joining the Huskies, Sarkisian served as a USC assistant under Pete Carroll (2001-03, 2005-08). He also worked as an Oakland Raiders assistant in 2004. Sarkisian played quarterback at Brigham Young University and later played in the Canadian Football League.

FIGHTING ILLINI NOTES: Illinois opened the season with a 42-34 victory over Southern Illinois and followed with a 45-17 victory over Cincinnati. In the Cincinnati win, Nathan Scheelhaase threw for 312 yards and four TDs as Illinois racked up 522 yards of total offense . . . A win Saturday would make Illinois 3-0 for only the second time in the last 12 seasons . . . Saturday’s game against UW will be Illinois’ first in Chicago since the 48-27 victory over Northwestern at Wrigley Field Nov. 20, 2010. It also will mark the Illini’s second game at Soldier Field. The first was against Washington State Sept. 1, 1994, a 10-9 victory for the Cougars . . . The Illini received votes in both of this week’s polls . . . Tim Beckman is in his second season leading the University of Illinois football program. Beckman’s first team, which finished 2-10, produced four 2013 NFL draft picks – OL Hugh Thornton (third round, Colts), DT Akeem Spence (fourth round, Buccaneers), DB Terry Hawthorne (fifth round, Steelers) and DE Michael Buchanan (seventh round, Patriots),  the most by any Big Ten team. Prior to Illinois, Beckman spent three years as head coach at Toledo, where he led the Rockets to two bowl appearances and a Mid-American Conference West Division co-championship.