Dempsey, Johnson back for Sounders showdown

With a victory over Real Salt Lake, the Sounders can take over first place in the Western Conference, a remarkable leap from May when they were in last place. 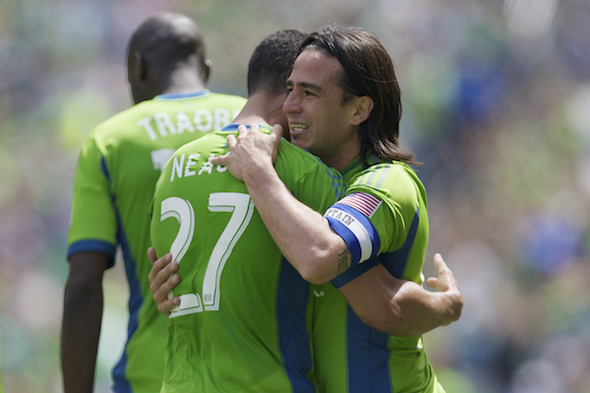 The Sounders have an opportunity Friday night to accomplish something even the most fanatical Rave Green scarf waver would have found hard to fathom three months ago: Pull off a worst-to-first run. But a victory over Real Salt Lake (48 points) will vault the Sounders (46 points) into first place in the Western Conference.

For the occasion, the Sounders will open the bowl, meaning that another huge crowd is expected. The Sounders opened the entire stadium six times, most recently Aug. 25 for a Cascadia Cup duel against Portland, and have attracted an average of 61,380 in those matches (more than 52,000 tickets have been distributed for Friday’s match).

The Sounders will enter as MLS’s hottest club, winners of four in a row and seven of eight, including three victories in the past eight days that netted them nine points. Seattle, having also earned 21 of a possible 24 points in its last eight, is unbeaten (9-0-3) in 12 consecutive matches at the Clink.

No MLS team presents a greater threat to turn all those Seattle positives into a negative than Real Salt Lake. The teams have met 16 times, RSL winning six with five draws. RSL also won the two previous meetings this season,  2-1 March 30 and 2-0 June 22, both at Rio Tinto Stadium in Sandy, UT.

Seattle hasn’t been able to beat Real Salt Lake in a regular-season match since May 28, 2011, and RSL will come to town having tallied a league-high 52 goals, including multiple goals in 12 of its last 16 games.

As always, Seattle’s principal hurdle will be solving goalkeeper Joe Rimando, who has been hellish on the Sounders. In the last seven matches between Seattle and RSL, covering regular season and playoffs, Rimando has held Seattle to just two goals.

The Sounders will have Eddie Johnson and Clint Dempsey available, but neither are listed among the probable starters. Both are just back from duty with the U.S. National Team. Leo Gonzalez, who sat out Seattle’s 2-1 win over Chicago last week due to a red-card suspension, is also available and scheduled to start.

Dempsey played 90 minutes while Johnson was subbed out in the 75th minute of the U.S. team’s 2-0 over Mexico Tuesday that secured a spot in the 2014 World Cup. They returned to Seattle Wednesday and trained with the team Thursday.

“I’ll be ready for whatever capacity that Sigi (Schmid) wants to play me,” Dempsey said. “Now it’s about doing the things that will make you be as prepared as possible, so if you do play that you can do a good job.”

According to the probable lineups, Schmid plans to go with Lamar Neagle and Obafemi Martins at the forward slots. Martins returned to the lineup against the Fire and played 89 minutes after sitting out four matches with ankle problems.

“I thought Oba was really energetic and bright in that first half,” Schmid said. “He got behind them — you look at the first 10 minutes of the game and he was goal-dangerous three-four times. Obviously, when he gets back into rhythm with training he’ll feel a little more comfortable with some of those things.”

Brad Evans, suffering from a calf strain, has been ruled out. The Sounders hope he can return for the LA Galaxy match Sept. 21.

“We think if we had tried to throw him out there (against RSL), we’d have jeopardized the L.A game,” Schmid told reporters late this week. “But he felt much much better today. He wanted to do more, but we had to put the reins on him and say, ‘No, that’s enough. You’re good. Let’s keep moving forward.'”

Steve Zakuani was removed from the disabled list, where he had been since June 12 after undergoing successful sports-hernia surgery. He is eligible to play, but likely will be held out Friday.

COMING UP: Sounders play at the LA Galaxy Sept. 21 and return to CenturyLink Sept. 29 to host the New York Red Bulls.