All the eyes, all the noise on Seahawks-49ers

The Seahawks have lost four of the past five meetings with San Francisco, but scored a 42-13 win over the 49ers the last time the clubs met. Seattle is favored by 3. 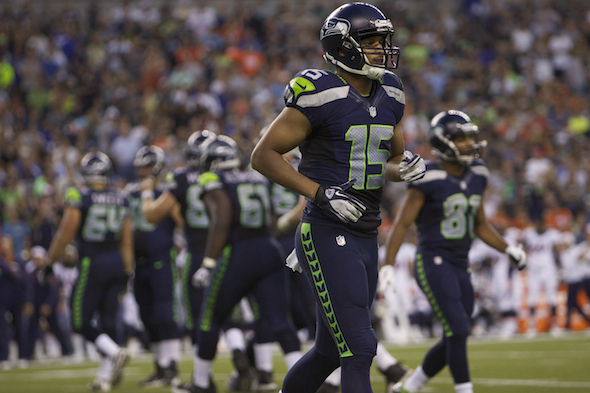 No one has any idea what will happen Sunday night when the Seahawks host the San Francisco 49ers at CenturyLink Field in the most anticipated Week 2 match-up in years. But that hasn’t stopped the experts from making predictions or offering keys to the game.

As far as CBS Sports is concerned, the Seahawks already have this one wrapped up. All eight of its experts opine that Seattle will come out on top. USA Today isn’t as sure. Three of its experts picked Seattle, three others San Francisco. ESPN asked 13 of its swamis to weigh in. Seven went with San Francisco to score an upset on the road. NFL.com also likes the 49ers by a score of 23-20.

Art Thiel of Sportspress Northwest is going with the Seahawks, with the score 24-17.

Prognosticators are all over the map on the game’s keys. For some, it’s which quarterback, Russell Wilson or Colin Kaepernick, delivers the better performance. For others, it will come down to Marshawn Lynch vs. Frank Gore.

Many think the key is Anquan Boldin vs. Richard Sherman and the “Legion of Boom” (Sherman has seven INTs in his last seven NFC West games). One expert suggested the best “game within the game” will be the matchup of Seattle left tackle Russell Okung and San Francisco DE Aldon Smith, the NFL sack leader.

Beyond debate is that Seahawks vs. 49ers has become one of the best feuds in the NFL. The 49ers represented the NFC in Super Bowl XLVII last season only weeks after suffering a 42-13 thrashing by Seattle at The Clink, where the Seahawks haven’t lost since Christmas Eve — in 2011 — when San Francisco beat them 19-17.

Following a six-game Seattle winning streak from 2003-05, San Francisco has won eight of the last 14, five of the last eight and four of the last five. But the Seahawks went 8-0 last season at The Clink, which has never been louder than it will be Sunday.

Since both teams were built to run first, the success of each club’s ground game will likely determine which takes the first significant step toward an NFC West title.

No way to tell how it will play out Sunday, but Gore has rushed for 1,210 career yards against Seattle, his most against any team. Gore rolled for 131 yards in first Seattle-San Francisco matchup last season (13-6 49ers win), but was held to 28 on six carries in the second.

In their past 53 contests, the 49ers have allowed a 100-yard rusher five times and Lynch was responsible for three. Since Jim Harbaugh became head coach, the Seahawks have averaged 125 yards rushing in four meetings with the 49ers. All other opponents have averaged 62.3.

Lynch, though, managed a mere 43 yards last week against Carolina, prompting coach Pete Carroll to emphasize the importance of Lynch returning to form.

“It’s important for our overall play and the formula that we want to perform,” Carroll said. “We want our defense and special teams humming and we want to run the ball. Running the football helps us in every way, and I’ve said that it closes the circle on the style of play that we have.

“We want to be tough and physical and make sure that that’s present every game week, and that we go after it. So its hugely important this week. Somehow we made it through last week without running the football very well. You can count on that.”

The Seahawks still have injury concerns. Cornerback Brandon Browner sat out practice all week with a hamstring injury and is listed as doubtful, but Carroll said Browner will be re-evaluated before the game. DE Cliff Avril (hamstring) practiced two days last week and will play. DE Chris Clemons is questionable. DT Jordan Hill and S Jeron Johnson are likely out.

Saturday, the Seahawks added to their defensive-line depth by re-signing Clinton McDonald, who was cut Aug. 31, and cut tackle Mike Person. McDonald played 29 games for the Seahawks.

“We we’re really pumped about the first chance to play at home,” said Carroll. “We’d like to pick up where we left off last year. That means that everyone has got to be on it in all phases. This is a great team we’re playing. We are going to have to play really good football to get what we want done.”

SERIES: Dates to Sept. 26, 1976, when the Seahawks dropped a 37-21 decision at the Kingdome. Jim Zorn threw for 264 yards and a touchdown for Seattle and Jim Plunkett tossed for 239 and three TDs for the Niners. The Seahawks have lost four of the past five meetings, but won the last won 42-13 at CenturyLink Field Dec. 23, 2012. Russell Wilson threw a career-high four TD passes, Marshawn Lynch scored twice and Richard Sherman returned a blocked field goal 90 yards to a TD. Colin Kaepernick threw for 244 yards with one TD and one INT for the 49ers.

SEAHAWKS HEAD COACH: Pete Carroll (59-54 career, 26-23 Seattle) is in his fourth season. In 2010, he directed Seattle to the NFC West title, the Seahawks becoming the first team in NFL history to win a division with a losing (7-9) record. Prior to joining the Seahawks, Carroll served as head coach at Southern California, where his Trojans won seven Pac-10 titles.