Although it seems unlikely, UW coach Steve Sarkisian thinks his new offense can be even faster than the one that produced 592 yards and five touchdowns in the season opener. 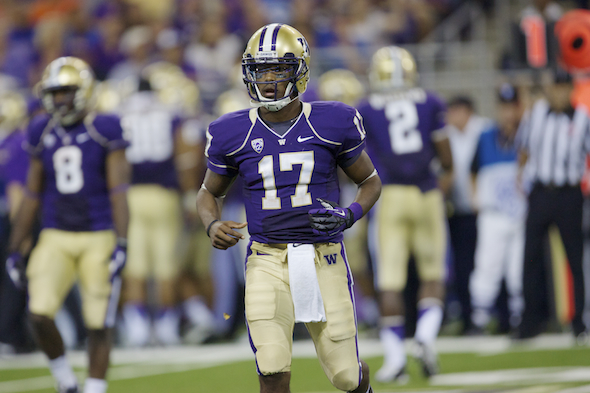 Excuse Washington QB Keith Price if he remained surprised Monday by just how efficient the Huskies offense was in its 38-6 season-opening win against Boise State.

A glance at UW’s output in its convincing romp suggests that the debut of their uptempo system was a big success: 592 total yards and four consecutive second-half scoring drives against a worn-down Broncos defense.

But coach Steve Sarkisian said he thinks there is plenty his unit can do more efficiently, as the No. 19 Huskies prepare to play Illinois (2-0) Saturday night at Soldier Field in Chicago. Like getting the ball post-play to the ref most able to start the next play.

Shortening the time between plays gives Price extra time to go through his pre-snap reads of the defense. The process also can be expedited by something as seemingly trivial as getting players in and out of the game, Sarkisian said.

“When we sub from the sidelines — doing it with a real sense of urgency when we’re changing personnel groupings and communicating with a guy and letting him know so he can get off the field in a timely manner (can help),” he said.

The Huskies ran 85 plays (31 passing, 54 rushing) against the Broncos and played mistake-free after Price threw an interception on the first possession. Price finished 23 of 31 for 324 yards and two scores, which pushed him one past Cody Pickett (55) as the school’s career leader in touchdown passes.

Price thinks the Huskies can play faster since they’ve experienced the difference between operating quickly in practice and running the offense in a game.

“In practice, it’s kind of hard to gauge how fast we’re going because we’d have an explosive play and then we’d come right back to where we were previously,” he said.

Sarkisian felt fortunate to have a bye in Week 2 because it allowed Price and Co. to continue to refine an offense installed roughly six months ago. It was also Price’s first chance to shoulder the increased responsibility that goes without huddling.

“Pretty much every read is basically on me, which is awesome,” he said. “I still have to be smart. I don’t go out there and just make stuff up and check just to check.

“I have the freedom to get my team out of a bad play if I don’t like the play that’s called,” he added.

That’s a good thing if he continues to play like he did against Boise State.

Playing at the home of the Chicago Bears does have its drawbacks. Soldier Field is notorious for its sloppy sod, even in decent weather, and the Huskies don’t have a grass practice field on their campus.

“I think that’s part of the reason we went over to the VMAC in training camp a couple of times,” Sarkisian said. “The majority of us grew up playing on grass fields when we were kids — and not very good ones. I think we’ll adapt fine once the game starts.”

The return of Austin Seferian-Jenkins

Sarkisian noted last week that TE Austin Seferian-Jenkins was still working his way back into shape after missing some of fall camp with a broken right pinky and sitting out the season opener for an off-season DUI conviction.

In his first game back, that won’t keep the six-foot-six, 276-pound consensus first-round NFL draft pick from figuring heavily into UW’s offensive package.

“He’ll have a significant role in this game plan with opportunities to catch the ball, whether it’s short, intermediate or long,” Sarkisian said.

“We’re glad to have him back. I think he makes us a better football team. We’ll see how it goes.”

Long an afterthought in the Big 10 Conference, Illinois began the season with a suspect 42-34 win against Southern Illinois. Then last week happened.

Led by QB Nathan Scheelhaase, who threw from 312 yards and four touchdowns, the Illini crushed the visiting Cincinnati Bearcats 45-7.

“They have a lot of speed on that team,” Sarkisian said. “That’s going to be one of the biggest challenges for us is how to contain the speed and contain the quarterback.”