Some think it’s the game of the year in the NFL. Seahawks and 49ers are tut-tutting it. But only the12th Man knows why Sunday is such a big deal to so many Seattle fans. 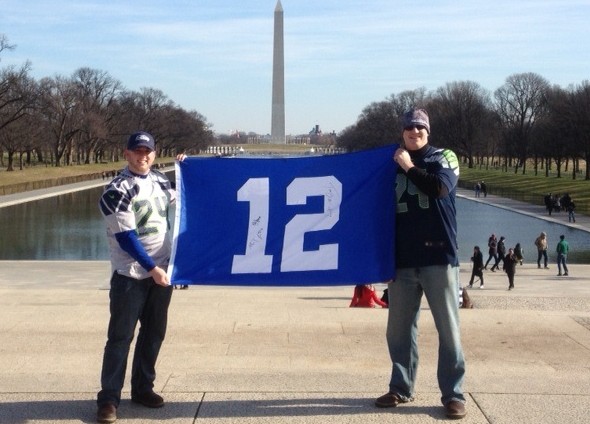 The 12th Man represented in D.C.: Seahawks season ticket holders Ryan Willmaser, left, of Monroe, and Shaun Messerli of Puyallup, show the flag at the National Mall before the Redskins-Seahawks playoff game in January.  / Willmaser photo

How big is Sunday’s game between the Seahawks and 49ers? Media credentials have been requested by representatives from Vulcan, Tatooine and the Klingon home world (no email request from the Death Star, however). Already, the Borg have been here, assimilating San Francisco 49ers coach Jim Harbaugh.

“You Earthlings are weak,” Harbaugh said in an emotionless monotone on a conference call Wednesday. “Resistance is futile.”

Actually, he didn’t say that, although the emotionless monotone was correct. But he was so deliberately boring that other worlds need to be imported via media wormholes to enliven the discussion.

The Seahawks and 49ers are offering virtually nothing but oatmeal this week about the clash whose outcome may have been foreshadowed by Joshua 6:21 in the Old Testament about the fall of Jericho: ” . . . destroyed with the sword every living thing in it — men and women, young and old, cattle, sheep, and donkeys.”

OK, we’ve taken some liberties here in going from 5000 B.C. to the 24th century to grasp this highly anticipated collision of the colossi. Consider the hyperbole a counterweight to the efforts of the participants to tamp down hysteria.

The next game on the schedule is the biggest game of the year — that’s how we look at our opponents each week,” said Harbaugh.

Well, hell. Is it possible to die of terminal poker-face?

After some badgering, Harbaugh finally owned up to the teensiest bit of emotion when he conceded that he likes big rivalry games.

“Yeah, I always have,” he said. “It raises the bar for both teams.”

Way too sensible. The quote was a far cry from his “jive turkey gobblers” riff Oct. 30, when he apparently was paying a complement to his then-quarterback, Alex Smith, but ended up speaking pidgin Borg. I warned you about this.

It’s game week, and athletes and coaches are trained to be rhetorical dorks. I also know that few, if any, get where this game fits into the great sweep of Seattle sports history because they haven’t lived it.

For so many years, so many games have meant so little. So many hopes have been extinguished so abruptly.

The subsequent cynicism is the rot that ruins the joy.

The Mariners can’t get past Memorial Day with a game that means something other than two outs and nobody on. The Sounders have been consistently good, but a playoff dud. Huskies football has been in a 20-year crater from which it may have emerged Aug. 31. Huskies basketball has had numerous high points under coach Lorenzo Romar, but none of them are past the round of 16 in the NCAA tournament. And fergawdsakes, some goofball Okies outwitted us for the Sonics after 41 years.

The Seahawks had a shining moment in Super Bowl XL, but the outcome is still not spoken of by parents who are concerned about their children’s emotional welfare. And the farewell to the franchise’s best coach, Mike Holmgren, was a 4-12 season.

Two recent hallmarks of Seattle sports: The Seahawks won a division championship with a losing record, an NFL first, and Felix Hernandez won a Cy Young Award with the fewest wins in the history of the honor.

Seattle sports fans come by their scars honorably, frequently and beyond the sporting imagination.

That’s why Sunday is a big deal. The 12th Man cares deeply because the moments are so rare to engage in relevance.

In the space of three weeks, the Sounders will have filled the Clink with nearly 70,000 for the Timbers game and newcomer star Clint Dempsey’s debut, followed by same number of Seahawks fans Sunday, who will be asked to participate in an attempt to beat the Guinness book world record for noisiest stadium.

Most important, the game is against a foe of equal stature in the same division, the closest geographical rival the NFL can provide. So many times the local team might play well an impressive foe, but the victories are usually moral, uncounted by even the most sophisticated digital metrics.

Once the draft was done in April, these teams were assessed by many media members and fans as the two best in the game, operated by two superb young quarterbacks and coached by men filled with such disdain for one another that each would not offer to spit if either happened to be on fire. Then again, maybe they would, giggling.

After the Seahawks brutalized the 49ers in December, 42-13, Seahawks fans presumed they had the upper hand the rest of the way. But the as Seattle sporting fates would have it, they watched at home as the 49ers made the Super Bowl.

So the day the NFL schedule came out, Sept. 15 had so many red circles on the calendar it looked like Jupiter’s Great Red Spot.

Harbaugh was asked Wednesday whether he had one or two takeaways from the December loss.

Perhaps this time, the cattle, sheep and donkeys Sunday will linger in his recall.