Seahawks SS Kam Chancellor knocked himself out with a head-first tackle in a 2011 game against the Ravens. He says those days are over. Don’t tell 49ers’ Vernon Davis. 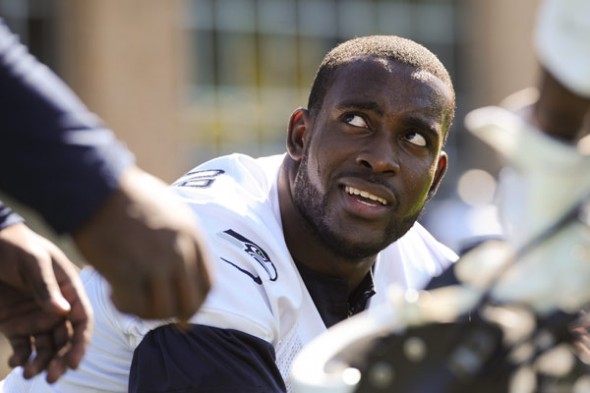 The moment before his feet touched down, TE Vernon Davis turned his head, coiled his body and prepared for impact.

Then Seahawks SS Kam Chancellor delivered the type of hit that either sticks with a player or never registers as a memory. Flags flew from every direction. It was December 23, 2012, a night before Christmas Eve, and the 49ers’ sideline had a silent night, at least for a bit.

“I just remember how the crowd went crazy and (Davis) being asleep at the end,” Seahawks LB Bobby Wagner said Wednesday when asked about the much-debated collision.

The Seahawks won the late-season matchup 42-13, buoyed by four aerial scores from QB Russell Wilson and a blocked field goal that CB Richard Sherman returned 90 yards for a touchdown.

But nine months later it was the hit, the legal hit, that players fondly recalled from the locker room in the Virginia Mason Athletic Center.

“He killed him without touching his head,” he said. “It was a perfectly legal hit on his body. It knocked a big-time player out. Things like that give you momentum quickly. Boom.

“When you see things like that, you’re definitely glad you’re on the team with Kam Chancellor and not against him.”

Many pegged the moment as the game’s turning point, though the Seahawks already held a 14-0 lead.

The tackle forced out Davis with a concussion and drew a 15-yard personal foul penalty for targeting a defenseless receiver. The official who casually dropped the flag at the feet of Davis as he laid motionless, erred on the size of caution. In real time, it appeared as if Chancellor made helmet-to-helmet contact, the jolt so jarring that his head whipped back at an alarming speed.

“We knew no matter where he hit him, it was going to be a flag because they’re so strict, but it looked like a good hit to me,” Wagner said.

He was right. The blow didn’t meet the rule’s criteria for an illegal hit against a defenseless receiver. Here’s what the NFL rulebook states:

(b) Prohibited contact against a player who is in a defenseless posture is:

Chancellor led with his shoulder, made contact slightly above the numbers and veered his head to the left. However, a liberal interpretation of what is considered the neck area, and the violent blow, compelled officials to act. Chancellor, at six-foot-three, 232 pounds, was molded in Virginia Tech’s notoriously physical defensive system. He is considered one of the hardest hitters in the NFL.

Maybe he could have done more to avoid drawing the flag, but as a charging defender, it isn’t always that simple.

“It’s hard when it’s a bang-bang hit and your target moves at the last second. That’s something you can’t control,” he said.

But he has improved steadily in that regard during his four seasons with the Seahawks. In a game against the Ravens in 2011, he cracked now-49ers WR Anquan Boldin with a hit that left both shaken. The league fined Chancellor $20,000 during a season when his base salary was $450,000.

“It was a pretty big hit. I kind of knocked myself out,” Chancellor said.

And yet it was a wake-up call. Chancellor had to stop leading with his head.

The organization saw enough of an adjustment in 2012 to sign Chancellor to a five-year, $35 million contract in April, $17 million of which is guaranteed. In 2012, he ranked second on the team with 101 tackles, defensed four passes and recovered two fumbles.

He downplayed the idea that more NFL rule changes aimed at protecting receivers would change a style that’s allowed him to go from a fifth-round draft pick to one of the most feared players in the league.

He just has to take a few more precautions.

“I don’t think it’s a big deal. It shouldn’t be hard for anybody to do.”