Boosted by another strong effort from Federal Way’s Lamar Neagle, as well as Obafemi Martins, the Sounders catapulted into first with a 2-0 win over nemesis Real Salt Lake. 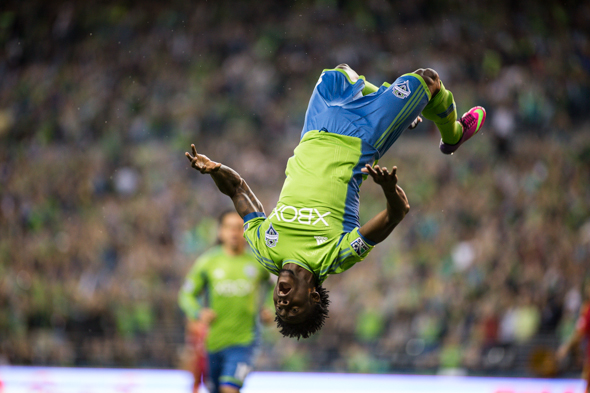 After scoring his eighth goal of the season in the third minute, F Obafemi Martins celebrated with his traditional, spectacular back flip. / Drew McKenzie, Sportspress Northwest

The Sounders (15-8-4, 49 points), who three months ago were dead last in the Western Conference standings, captured a quick lead behind goals from F Obafemi Martins and F Lamar Neagle and cruised to a 2-0 win over former table leader Real Salt Lake (14-9-6, 48 points) in front of 55,107 fans Friday night at CenturyLink Field.

The six-point swing helped Seattle claim an MLS-best record on a night it tied a franchise record with a fifth straight win. The victory was the Sounders’ eighth in the past nine matches.

“It’s tremendous, especially with what we’ve had to go through to get here,” said D Zach Scott of the run. “So (many) injuries, so much uncertainty with who’s even going to be on the team. I feel like we’ve had more turnover than any other year.”

The Sounders struck in the third minute when Martins whipped a pass to D Andy Rose as he streaked into the far corner. Rose instinctively bent it back to Martins, who guided it past goalie Nick Rimando to give Seattle a 1-0 lead.

Which is why it was imperative the Sounders staggered him quickly.

“I was very pleased with our effort and our team’s performance today,” said head coach Sigi Schmid. “We’ve kept climbing, we’ve kept climbing. Now we’re in first place. Now we have to make sure we stay there and enjoy the view a little bit.”

They reached the perch in part by keeping up the pressure as the half drew on.

A pass from Martins to D DeAndre Yedlin in the 38th minute set up a run-and-cross that netted both players assists and allowed Neagle to blast in his eighth goal of the season. It was Neagle’s third score in as many games and tied him with Martins for the team lead.

“He’s doing an amazing job this year,” said Yedlin of Neagle, his friend (and fellow area  native) away from the field. “I’m proud of him. I’m proud for him.”

His play was crucial because MF Brad Evans wasn’t available (injured calf) and F Eddie Johnson and MF Clint Dempsey sat on the bench for most of the match (both played in USMNT’s World Cup qualifier game Tuesday in Columbus, OH.).

Yet the Sounders still toppled a team that plagued them. They entered 2-5-4 against RSL in regular season matches, including two losses this season. The win pushed the Sounders to 11-2-3 at home in 2013.

“It’s a boost for us for sure,” Schmid said. “There were still people out there who were doubting us . . . last time I looked, everybody plays the same competition throughout the season.”

At intermission, the Sounders had six attempts on goal and had won 60.4 percent of duels.

RSL’s main threat in the second half came when MF Javier Morales lobbed a free kick from just outside the Sounders’ box. The ball wasn’t redirected and it caught GK Michael Gspurning unaware. He backed up into his own net, but kept the ball outside the goal line. Television replays were inconclusive.

Nixing the final scoring chance helped Gspurning to his 10th shutout of the season and his fourth in the last five games.

So loaded with depth is Schmid’s club that it subbed in Dempsey and Johnson, two key players on national team, in the second half. Dempsey entered in the 61st and Johnson followed in the 75th.

“It shows the depth of our team but it also shows the decision we made was the correct one,” Schmid said of his choice to start Neagle and MF Marc Burch.

Seemingly the only way the night could have improved was if Dempsey would have scored. His best chance to earn his first goal of the MLS season came shortly after his substitution, when he deked a defender and fired from a yard outside the penalty area.

But it sailed high.

“I’m just enjoying my soccer,” Dempsey. “I’m happy with the way that I’ve been playing, and I’m on a good page with the rest of my teammates.”

All of whom are seemingly playing their best soccer of the season.