Big numbers for Washington’s Sankey and Price, but turnovers and penalties keep Illinois in game into fourth quarter before Huskies get rare non-conference road win. 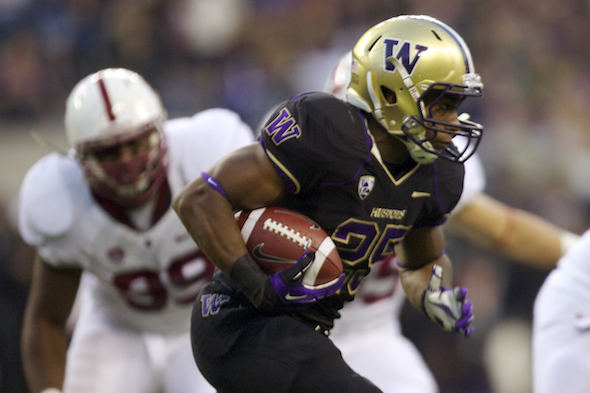 Amid the din of explosive plays, Bishop Sankey made his quiet case that he is the greatest college running back unknown in 49 other states, although the folks in Illinois are picking sod from their grills thanks to Sankey’s career-high 208 yards in 35 carries.

He was part of another stunning offensive output for Washington’s hurry-up attack, which ran 85 plays, as the Huskies did in the opener against Boise State, and gained 23 more yards — 615.

Many were bunched in three consecutive touchdown drives to start the third quarter, none bigger than one by backup RB Jesse Callier, who broke free on third-and-seven play for a 39-yard TD run and a 24-10 lead. Callier missed nearly all of last season after knee surgery, and finished with 66 yards rushing.

Illinois did not crumple, closing to 31-24 on a 10-yard touchdown run from wildcat formation by a freshman quarterback, Aaron Bailey. The drive included a 35-yard gain from a double-reverse pass, part of a bag of Illini tricks that had the Huskies’ defense guessing.

But the Huskies turned back the momentum on the second-to-last possession, when on a third-and-eight, coach Steve Sarkisian called the perfect play against a blitz — a screen pass to Callier that went for 35 yards to set up a Travis Coons field goal with 4:42 remaining that put the game out of reach.

The uptempo offense is the best addition to Montlake since University Village. The biggest uptick on defense was the pressure brought on the quarterback.

Illinois was 2-10 a year ago for several reasons, and even though the Illini have improved, the talent disparity with Washington was apparent. But the Huskies made enough mistakes to keep the game in doubt into the fourth quarter.

Wonder what might happen if Seferian-Jenkins pulls it together?