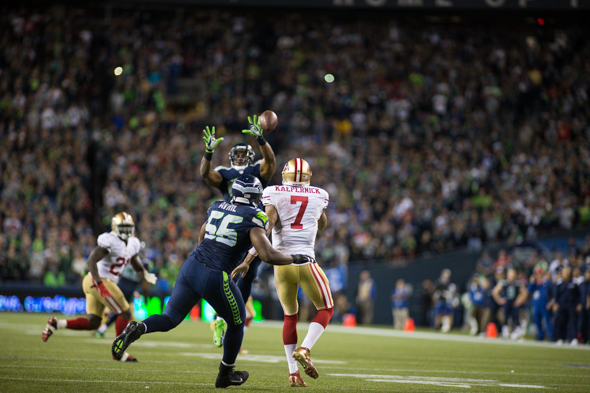 Did Colin Kaepernick meet his kryptonite?

The dual-threat quarterback with an arm like a howitzer and speed like an F-16 has mostly been uncontainable through the first 12 starts of his NFL career, including the playoffs.

But his two games at CenturyLink Field, losses in which the 49ers were outscored 71-16, revealed shortcomings that were largely absent against all but the Seahawks, in any city other than Seattle. Sunday night’s 29-3 loss added to the evidence.

“There were a couple of times we had things going, but we just stalled,” said Kaepernick afterward.

The 49ers’ offense mirrored the futility. They finished with 107 yards passing, 100 yards rushing, 121 of which were surrendered because of 12 penalties.

Players were pounded through the first half by showers, then lighting and thunder followed before officials cleared the field for an hour as a precaution. Kaepernick said he spent the delay reviewing “base things” within the offense. But he looked uncomfortable in the pocket prior and never found a rhythm after the Niners tried to open the game in a no-huddle offense. Passes were short, long and often off-target.

Was the football slippery?

“No, we just have to try and make plays,” Kaepernick said. “There were a couple of balls that I tried to force in there to try and get something going.”

Was it the one-hour delay?

But for three quarters, the 49ers offense, led by their prime igniter, couldn’t handle Seattle’s pass rush, wilted against its secondary and failed to tame a crowd that set the Guinness World Record as the loudest ever.

Neither Kaepernick nor Harbaugh made it a priority to praise the 12th Man, but Harbaugh succumbed when pushed to explain how it may have affected his quarterback. In the second half, the decibel level reached 136.6, which for some is loud enough to create permanent hearing loss.

“I don’t know how much,” said Harbaugh of the crowd. “They do a good job. It’s loud. It makes it hard for the offense to communicate.”

It showed in the fourth quarter. Kaepernick was harassed and often hurried. Absent were the plays he made last week while abusing the Packers to the tune of 27 for 39 for 412 yards and three passing touchdowns.

His final line against the Seahawks: 13 of 28 for 127 yards and three interceptions. He went five of 11 for 45 yards and two picks in the fourth quarter, when the 49ers needed some type of spark.

So flummoxed by the Seahawks’ secondary was Kaepernick that he didn’t find Anquan Boldin, the same Boldin who caught 12 passes for 208 yards and a touchdown in Week 1, until 9:42 remained in the game. Boldin finished with one catch for seven yards.

When he tried to find TE Vernon Davis down the right sideline in the late stages of the fourth quarter, he underthrew it. Seahawks CB Richard Sherman corralled the interception.

Kaepernick’s first-quarter interception, one CB Walter Thurmond deflected in the end zone to S Earl Thomas, was forced into double coverage and kept the Niners from taking an 7-0 lead.

“We are not going to win when I play like that.”