Washington has not started a season 3-0 since 2001, but is heavily favored to do so Saturday when the No. 17 Huskies return home to face overmatched Idaho State. 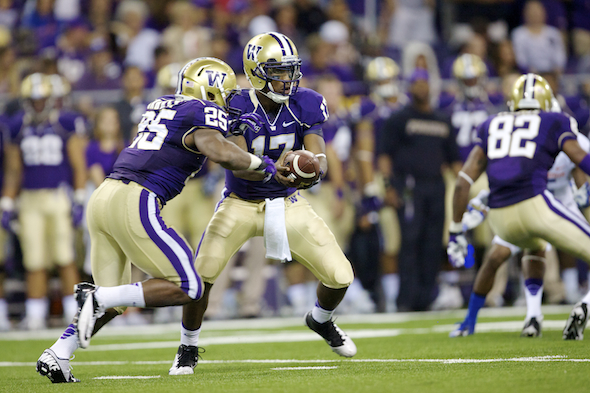 Ranked in back-to-back weeks for the first time since 2003, No. 17 Washington (2-0) returns to Husky Stadium Saturday to face 2-0 Idaho State with a chance to become the first UW team since the 2001 edition, coached by Rick Neuheisel, to open a season with three consecutive victories. Some bookies did not establish a betting line, others have Washington as a 53-point favorite.

One reason: Since 1981, Washington is 56-13 against non-conference opponents in Husky Stadium; only three of the 13 losses have been administered by less-than-powerhouse programs, notably Nevada in 2004.

Another: Prognosticators like what they see in Steve Sarkisian’s fast-paced Huskies, who  dashed off 85 plays in each of their first two contests while averaging more than 600 yards of total offense. Washington ranks No. 4 in the NCAA in total offense and No. 3 in third-down conversions, getting huge production from RB Bishop Sankey and quarterback Keith Price.

Sankey has rushed for 1,142 yards in his last seven contests (six 100-yard games during that stretch) and is the nation’s leading rusher at 184.5 yards per game. Among Washington’s 1,000-yard rushers, 11 dating to Hugh McElhenny in 1950, only Napoleon Kaufman in 1994 ran for more yards (463) in the first two games of a season than Sankey, who had 161 against Boise State and a career-high 208 at Illinois.

Price is coming off consecutive 300-yard passing performances after exceeding 300 on  two other occasions. Of greater significance is Price’s lofty passing efficiency. Two years ago, Price set the UW single-season record with a 169.1 efficiency rating, then fell off markedly last year, posting a 122.38 mark.

The Huskies amassed 1,207 yards, their most in the first two games of a season since at least 1947 (the first year total offense was tracked), when Pest Welch coached the club.

While Washington had All-America tight end Austin Seferian-Jenkins back last week, the Huskies might be without middle linebacker John Timu, who suffered a bruise to his right rotator cuff in the Illinois game. Timu, who leads UW with 18 tackles and calls signals on defense, suffered the injury in the second quarter and did not return.

Washington’s principal test Saturday will be handling Idaho State’s passing attack, which is perhaps best illustrated by this stat: In all of Bengals history, Idaho State quarterbacks have thrown for more than 400 yards in a game 15 times. The current QB, Justin Arias, has done it twice in the past two weeks.

He had 439 against Dixie State in Idaho State’s opener and 429 against Western State — 868 yards, four touchdowns and one interception.

Although Idaho State plays in the Big Sky, it is no stranger to traveling to face nationally ranked teams. Last season, the Bengals ventured to Nebraska and came away with a 73-7 smothering and never recovered. While the Bengals signed on to play Washington for the payday, head coach Mike Kramer believes the experience will help his players in the Big Sky race.

“The game will slow down for us as we play the bulk of our schedule, outside of BYU down the road (Nov. 16),” Kramer said. “The Big Sky Conference just will not be as fast as the way the Huskies will play against us Saturday afternoon.”

“We’re just going to play hard and let the rest take care of itself,” senior wide receiver Cam Richmond told the Idaho State Journal. “We’re going to control things that we can control, and whatever happens, happens. The odds are stacked against us going to this game. I believe they will be stacked against us going up against Big Sky opponents. We can’t worry about any of those things. We’re going to go out, play hard and play our best.”

SERIES: This is the first meeting between Washington and Idaho State, located in Pocatello and a member of the Big Sky Conference.

UW HEAD COACH: Steve Sarkisian (28-25-0) is in his fifth season. After a 5-7 record in 2009, Sarkisian guided the Huskies to a 7-6 record in 2010 that included a 19-7 victory over Nebraska in the Holiday Bowl. That marked Washington’s first postseason game since the 2002 Sun Bowl. Sarkisian coached the Huskies to subsequent 7-6 marks in 2011 and 2012, earning invitations to the Alamo (Baylor) and MAACO bowls (Boise State). Prior to joining the Huskies, Sarkisian served as a USC assistant under Pete Carroll (2001-03, 2005-08). He also worked as an Oakland Raiders assistant in 2004. Sarkisian played quarterback at Brigham Young University and later played in the Canadian Football League.